My grandchildren were both born in the month of July, so when we get together with the kids over the summer, we celebrate both their birthdays at the same time.  Now the third grand baby will be a fall baby, so I don't know what my daughter will want to then.
I bought the grand babies gifts my daughter told me to get.  Alethea already owned a light up mermaid, but the light up part of the doll stopped working so her mom told me to buy her another one.  I didn't buy the exact same mermaid, because I wanted her to have a different one.  Atticus, saw an animontronic dinosaur at another child's birthday party and really wanted one for himself, so I bought him a T-Rex.  We were really worried it might be too scary for him, but he ended up loving it!
I made handmade cards and tags for both the kids.  I matched the card to their gift.  For Alethea's card and tag, I googled "Barbie coloring book pages" and when I found some I liked, I printed them  onto sticker paper. 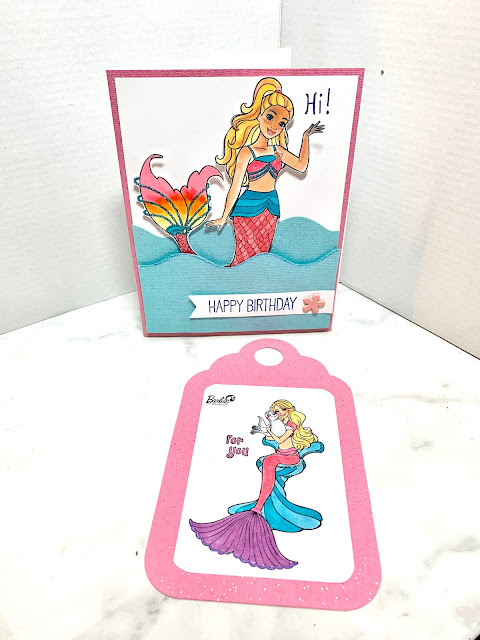 I created the ocean waves with blue glitter paper.  I took a wave stencil drew it onto the paper and hand cut it out.  I did two waves.  One wave I glued right onto the paper, the top wave I popped up on dimensionals so I could slide the Barbie image in:  making it look like she is popping out of the water. 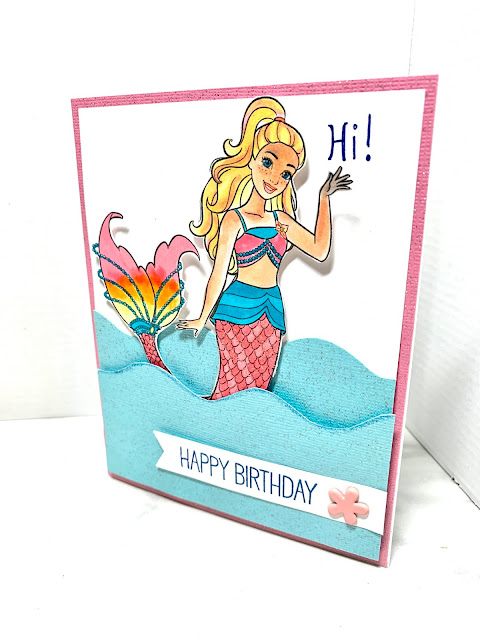 I colored the image exactly like the doll I bought her, then I used lots of glitter and glitter to make any little girl happy!  I popped Barbie up on the card with dimesnionals and hand wrote "Hi!" on the card.
The "Happy Birthday" sentiment was stamped on a separate piece of white card stock then the banner was cut with a MFT die.  I adhered it to the card with a floral brad.  I put the entire card base over a pink glitter card stock then adhered that to the card. 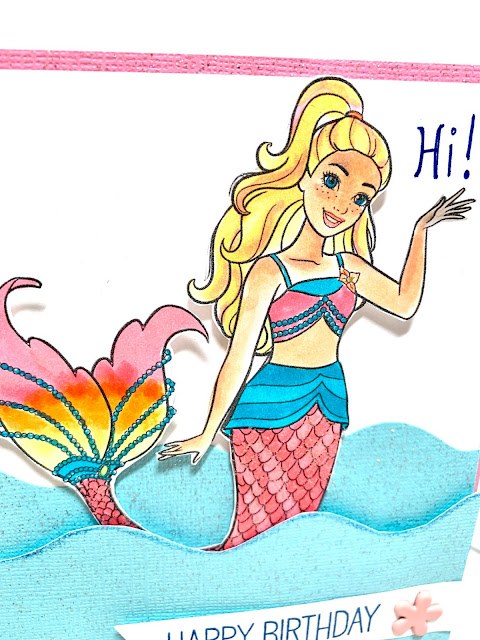 The tag was made with the same pink glitter card stock.  I cut it with my Cricut machine.  The image was colored in with markers, then I used a Spellbinder's Nestabilities to create a nice rectangle. 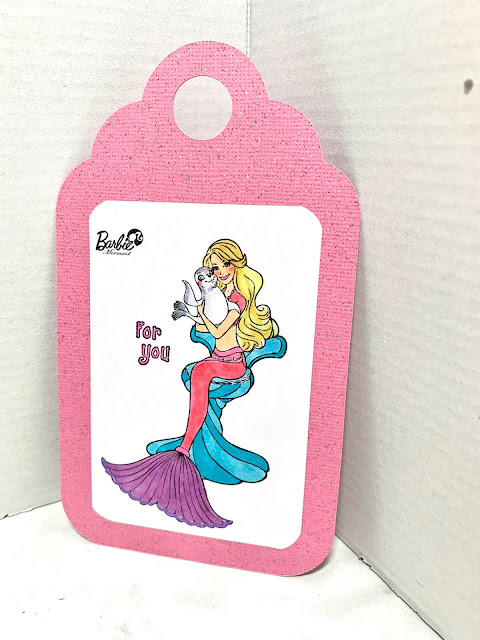 I used a corner rounder to round the edges of the main image panel and then I stamped a sentiment. 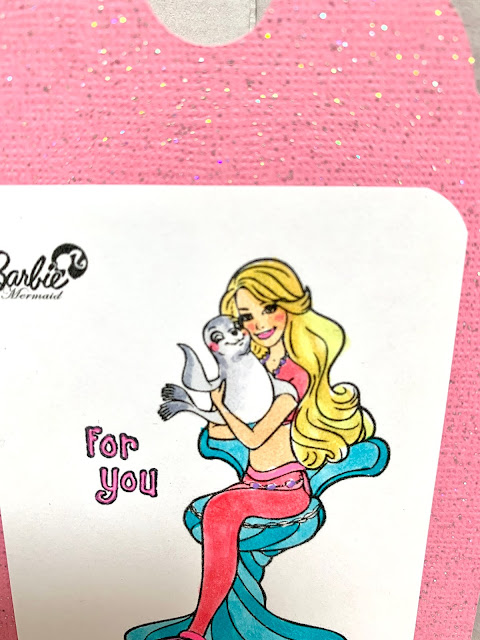 For Atticus' card I used a dinosaur Circuit Cartridge.  The Dinosaur part was already on the cartridge, I just cut it out in green paper.  Then I cut out the palm tree and the number "2" with different colored card stock.
The tag was also on the cartridge, I simply cut out the dinosaur part in green paper and I used white card stock for the tag portion. 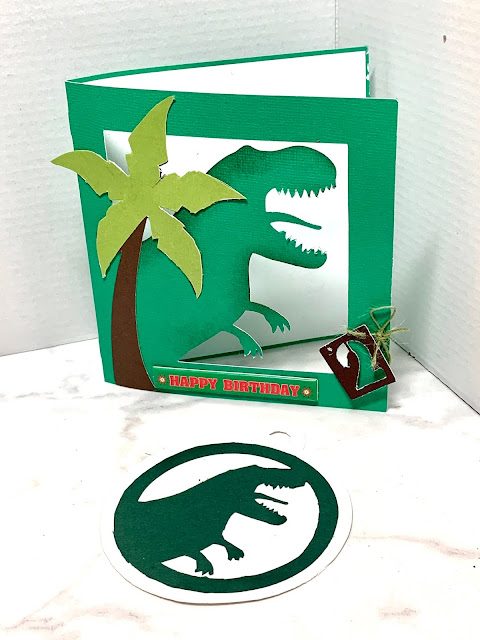 I glued the palm tree to the card and I tied the number "2" with a piece of twine.  The sentiment is a three dimensional sticker from my stash. 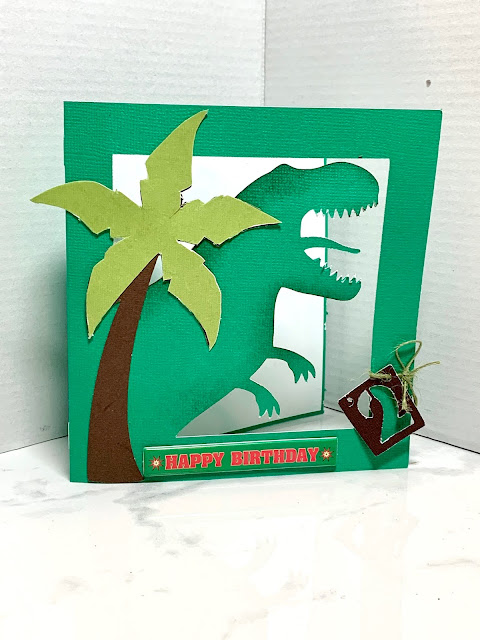 For the tag, all I had to do was glue the two pieces together. 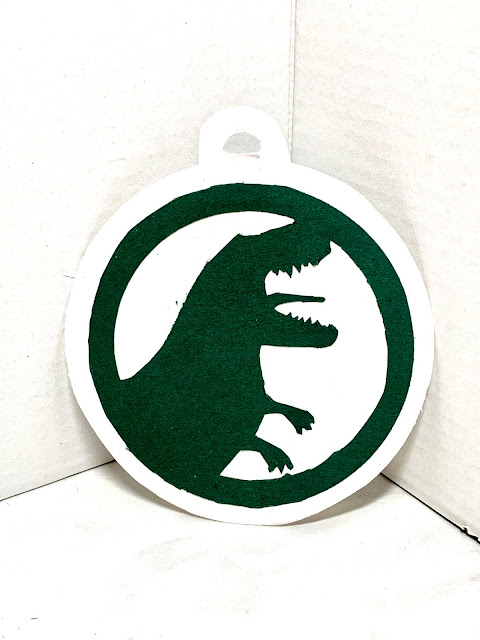 Now onto the party decor.  The party was just our small nuclear family so I didn't want to make too much of a fuss with decor, but I wanted to do something to make it a little extra special for the grandkids.  I also wanted a theme that was good for both genders too.  I ended up finding the cutest "Farmhouse Birthday Decor" at Hobby Lobby.  It ended up being perfect because the room we had the party in is already decorated in the modern farmhouse style. 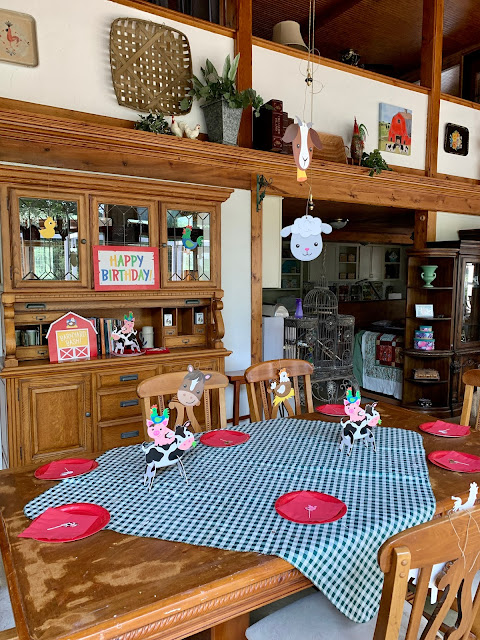 I threw a vinyl green gingham table cloth diagonally across the table as an accent.  Then I used red paper plates and napkins.  We normally always eat with real china, but it didn't match the decor, so I settled on paper plates. 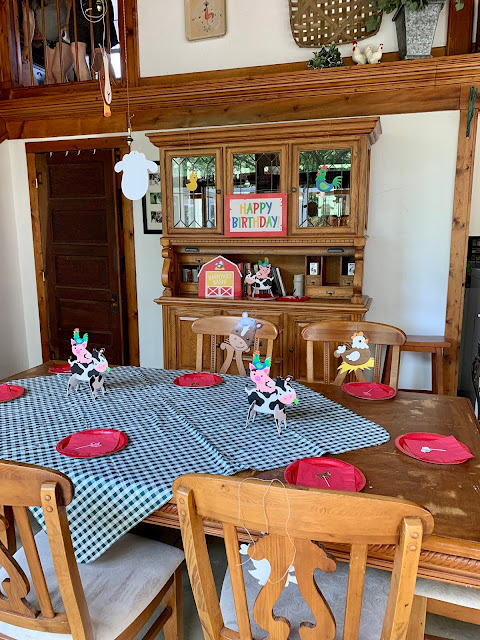 On the table sat the cutest card board cow/pig/rooster figurines and on each chair I tied an animal image.
I also hung animal images from the fan/chandelier. 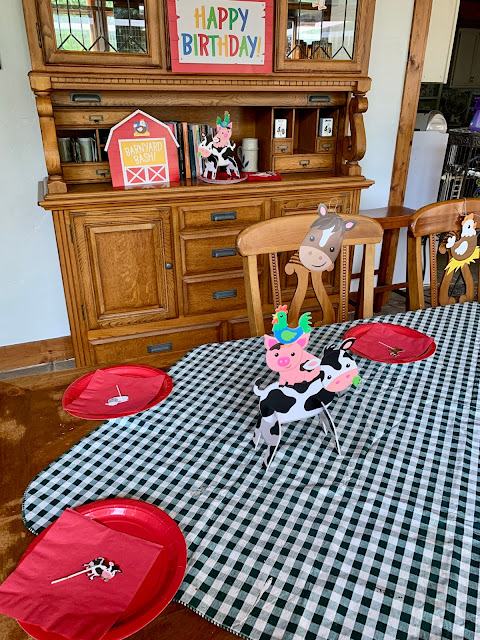 On the dining hutch I hung the "Happy Birthday" sign, and more animal cutouts. 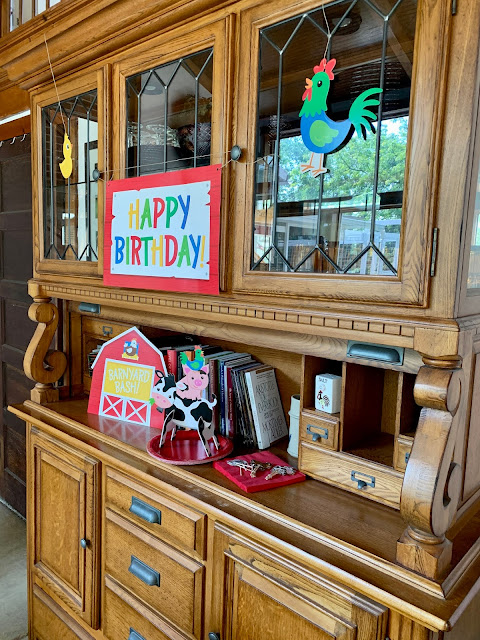 And here are some pictures from the party.  If am in none of them because I was both the photographer and videographer, so if you're looking for me, you won't find me.  😀. But if you watch the videos at the end of the post, you will definitely hear my voice.  I really need to be more diligent about handing the camera over to someone else so I get in the pictures too.  Someday these kids will be looking at these pictures and may think I wasn't even there.
In the picture below the kids are opening up their joint treat box.  I gave them a box of edible goodies, and I swear they were more excited about the yogurt covered pretzels than the actual toys I bought them! 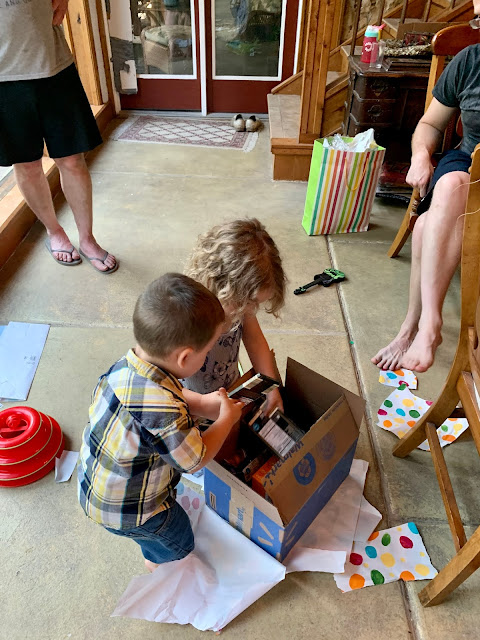 Ashley and Jason bought Atticus a drum set.  He just loved it!  Of course my son Jordan, who is a percussionist, wanted to try it out for himself (see the second picture below), but Atticus got jealous about his uncle playing with his toy and pushed him away. 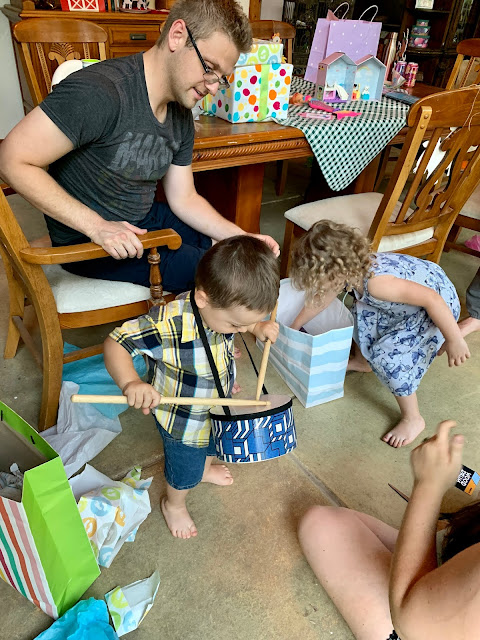 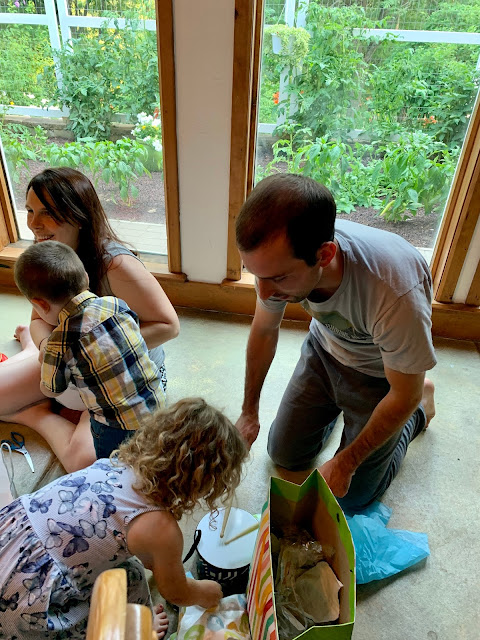 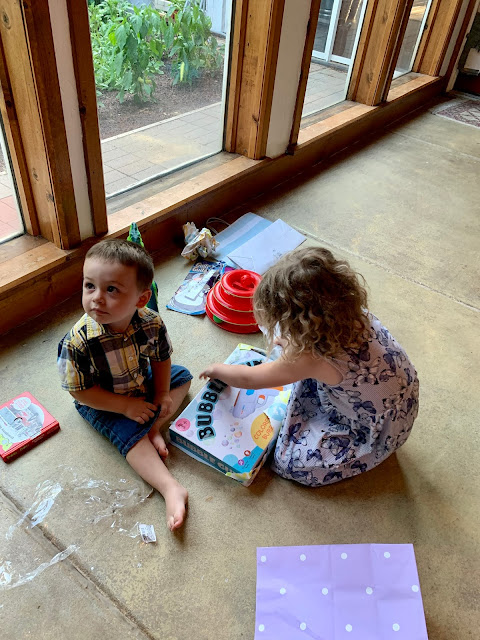 Alethea's mom gave her a case load of gel crayons and it made me jealous!  These crayons are amazing!  I will have to order my own.  She got them from Amazon. 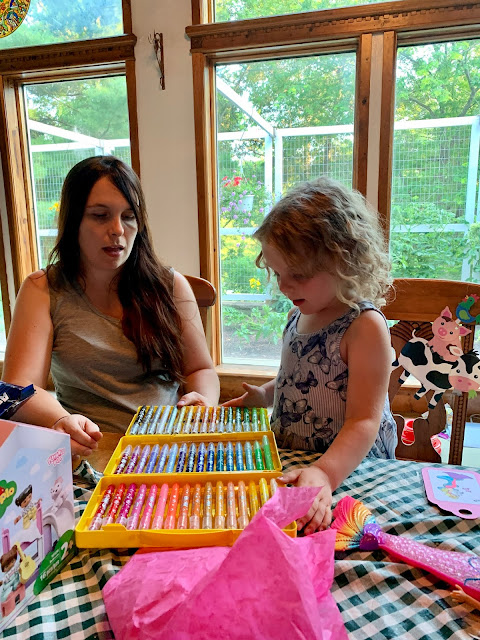 Alethea also received a Lego set from her Uncle Jordan. 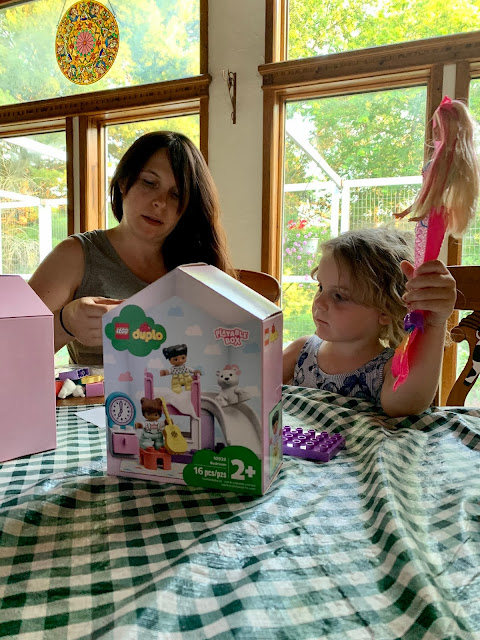 Here Atticus is just about to rip open his dinosaur gift from us.  You must watch the video below if you have time.  His reaction to the animontronic dinsosaur is priceless! 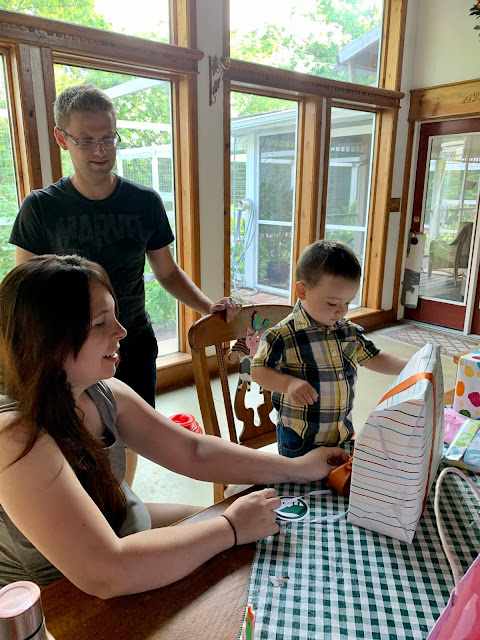 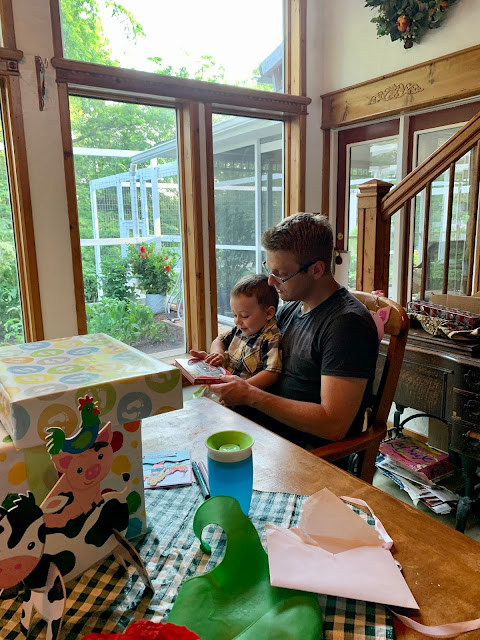 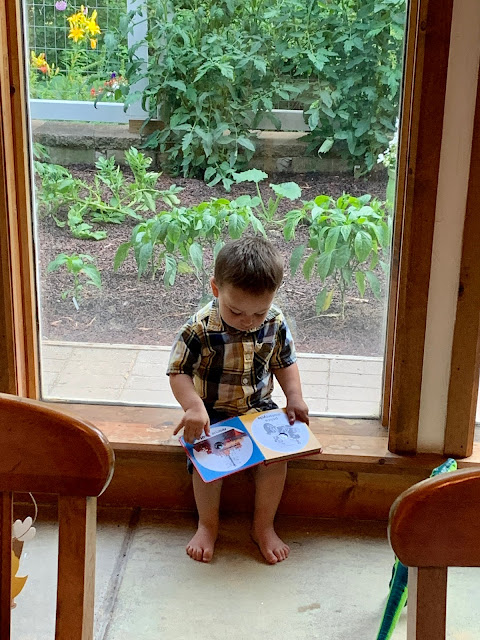 Here is Alethea opening up her gift from me and my husband.  I love how she takes the time to "read" the card.  She knows I make them for her and that they are very special.  Every time I give her a hand made card she displays it on her dresser.  She is so appreciative. 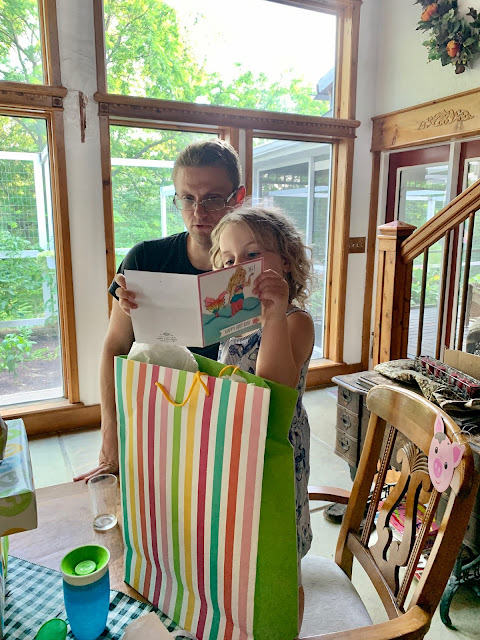 The kids had two birthday parties before they even got to my house, so I thought they were already "caked out" and I decided to have a Banana Cream Pie for dessert instead of a cake. 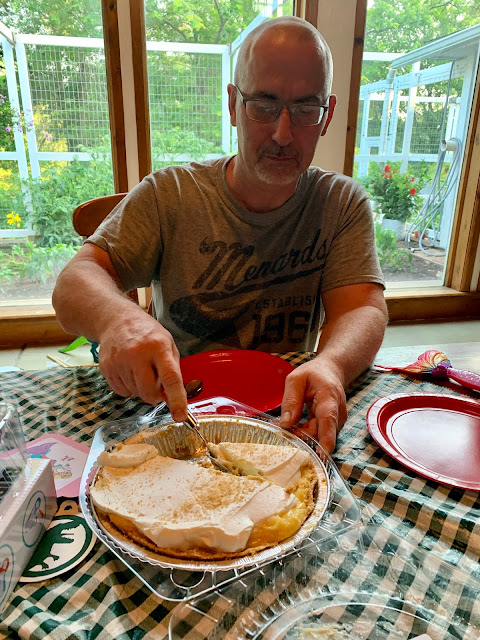 Atticus LOVES bananas so he sure loved Banana Cream Pie! It was such a fun birthday party!  It is such a joy to be able to bless ones grandchildren with gifts that make them happy.
And if you care to see more than just photos, I've included two cute videos of each grandchild opening up their gifts from my husband and I.
Have A Great Day!  Amy
Linking Up with these Fabulous Blogs HERE!
Posted by Amy Johnson at 12:00:00 AM