The Graduation Card That Never Made It

Have you ever sent a gift to someone and had no idea if they ever received it?  It seems to happen to me a lot,  and it's really getting annoying.  One reason is Thank You cards have appeared to go out-of-style.  I RARELY receive a Thank You card for gifts anymore.  In my day, it was quite the faux pas if you did not send Thank You cards.  I guess that shows my age.  Not sending Thank You cards shows a lack of gratitude or appreciation.  But what really bothers me, is I have no idea if the person even received my gift when they don't send a Thank You card other than checking my checkbook balance.  But if I buy them a gift, then I cannot even do that.
And such is the story of this card.  We received a graduation announcement at a very odd time of the year, it was not spring, so we thought either the graduate was behind on sending out their announcements, or he graduated in the winter.  Nevertheless, I made a handmade card and sent a check, and you guessed it, nada.  Now here's the really interesting part of the story, the check was never cashed.  And it's been a long time, almost a year now.  At first we thought, "Well, maybe the boy is away at college and the card was sent to his home and he hasn't received it yet, but when he goes home on break, he will cash it".  Well, months went by and that didn't happen.  So then we thought "Well maybe his mail sat for so long it got buried under all the junk in his room," or "Maybe the card got lost in the mail".  By now, so many months have passed we feel stupid to call and ask "Did you ever get our card?"  But then I also feel bad if the recipient thinks I never sent him anything for his graduation.  And worse, if the card did get lost in the mail, the last thing I want to do right now is make a whole new card and write another check.  Checks are expensive and I do not have the time to make another card.  I know. I'm lazy, and probably wrong.  I feel guilty.  I should probably just contact the mother via FB and ask her if her son ever got the card.  But now I feel so much time went by it would just be awkward.  What would you do?
Anyway, here is the long forgotten, never received, lost card: 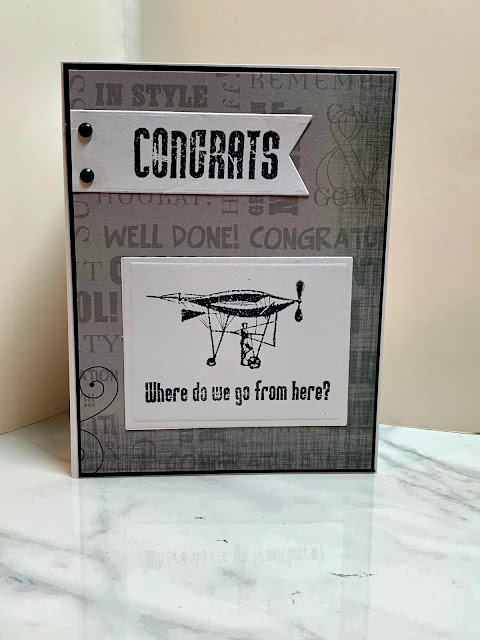 The recipient is a boy, so I created a card using dark colors and masculine images.  I used designer paper for the background, then stamped the sentiment and image onto card stock and cut them out using my Spellbinder's Nestabilities.  Brads were used to hold the sentiment in place. 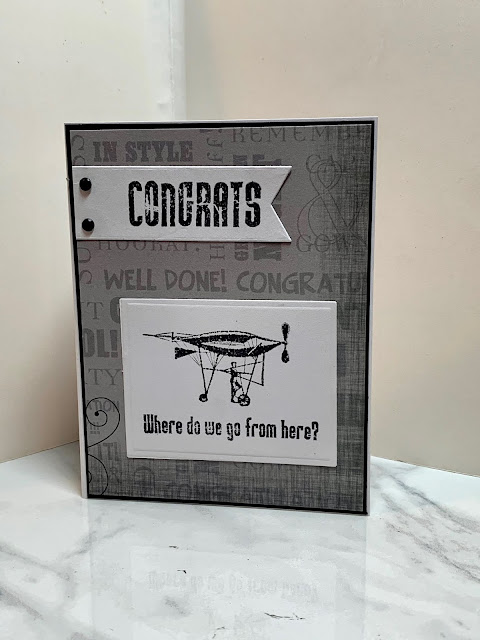 Edited to add an update:  Since everyone advised me to contact the mother even though it's been such a long time, I finally did.  She said "If I never received a Thank You card then her son never got the card, but she will check his room" 😀". This family was always so good about sending Thank You cards in the past, so I'm 100% certain the card got lost in the mail.
Have A Great Day!  Amy
Posted by Amy Johnson at 12:00:00 AM