This post is part of a travel series of our vacation in the Smokey Mountains.  To start at the beginning, go HERE!
On day two of our Smokey Mountain vacation we decided to hike one of the parks most popular trails:  Rainbow Falls.  Rainbow Falls is nearly eighty feet high, making it the highest single drop falls in the Smokies.  It gets its name from the rainbow it produces on sunny afternoons.  We were there in the morning, so we did not see a rainbow. 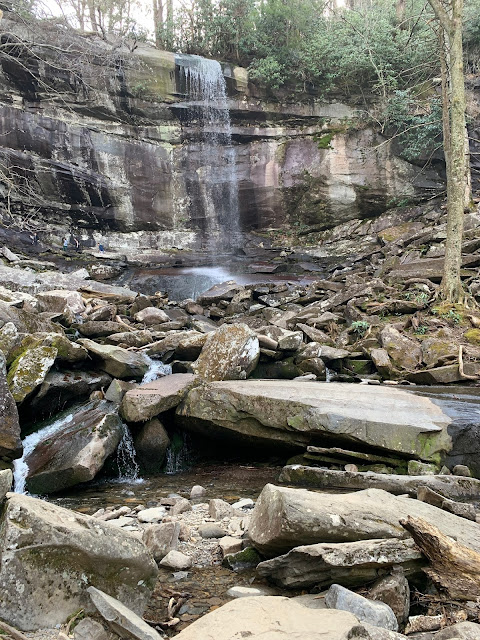 The Rainbow Falls Trail is 2.7 miles ONE WAY.  It is is described as moderately difficult, which I would agree with.  We were really physically hurting after this trail, and unable to do anything for the rest of the day.  We are serious hikers, but we hadn't really been hiking since last fall so that could have been part of the problem.  We saw lots of people turn around on this trail and never make it to the top, however, a lot of hikers in the Smokey Mountains don't seem to be in great shape.  The elevation gain is 684 feet per mile, with a total elevation gain of 1685 feet. 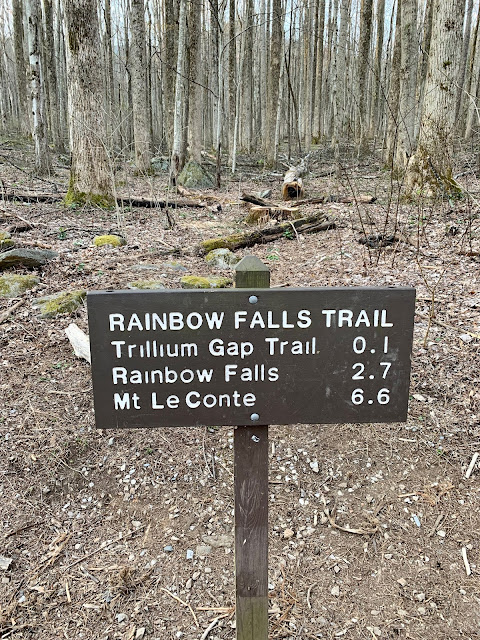 For a large part of the trail, you get to enjoy a beautiful stream running along the right side of the trail.  The sound of water is so soothing and it provides many pretty spots to stop and take a picture. 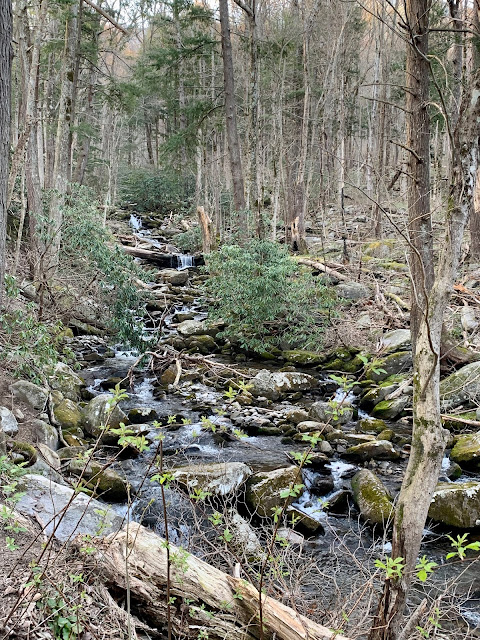 After the fires in 2016 the park addressed many issues of this trail.  They fixed eroded areas and added steps to make the trail easier to follow. 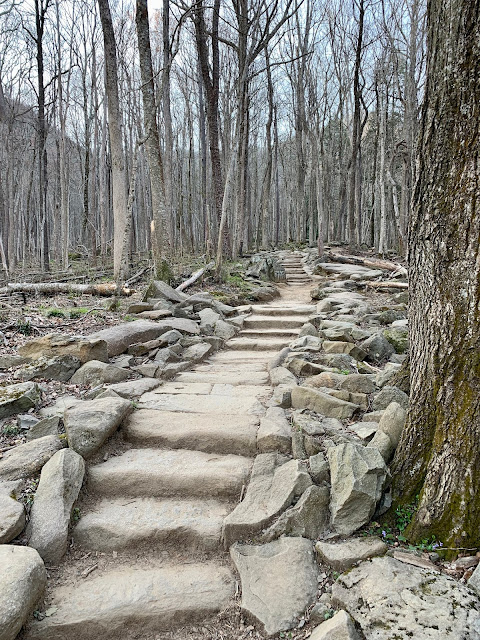 The one thing about the Smokies that amazed me the most was all the water!  There are streams of water everywhere in the Smokies.  I don't think we hiked a single trail that did not include water. 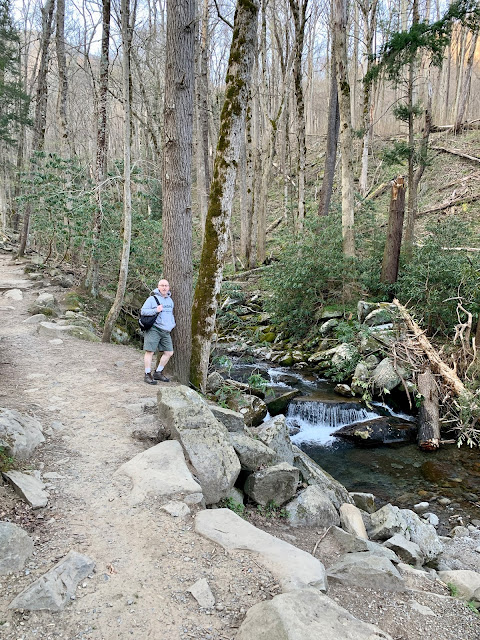 Because we read how crowded these trails get, we got up before dawn and were on the trail as the sun was rising.  It was so beautiful and peaceful.  It is recommended to hike this trail in the very early morning hours or the late afternoon because the sun rises right behind the falls making it difficult to photograph in the late morning/early afternoon. 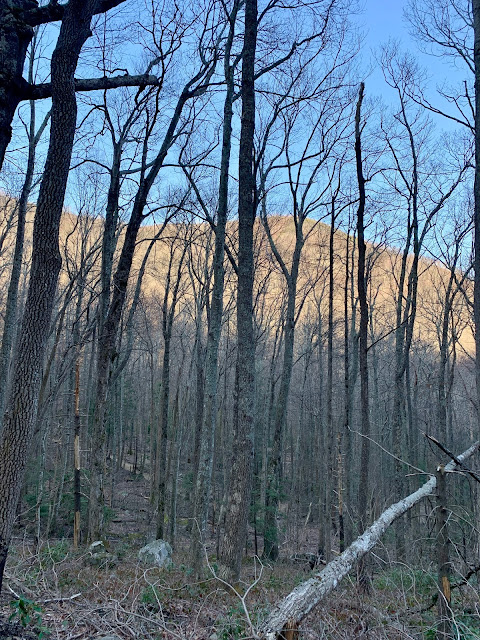 We spotted one very friendly turkey on our hike.  He was not afraid of me one bit.  I've included a short video of him at the bottom of the post. 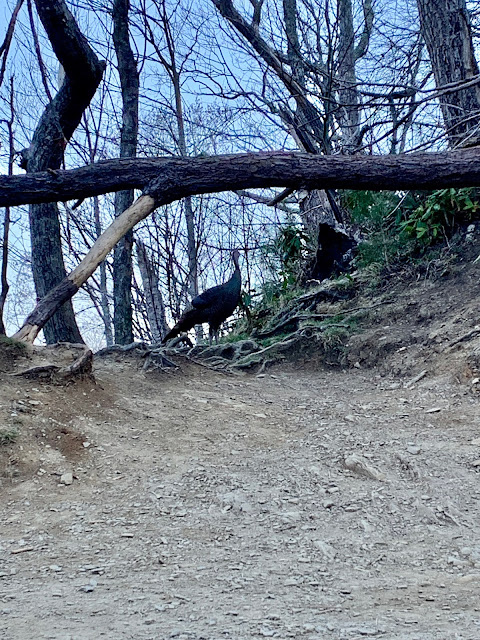 This trail was pretty much a constant incline.  You are climbing uphill for 2.7 miles.  I kept thinking:  "It will be so much easier on the way back down", but it really wasn't because the incline was so steep that my toes kept hitting the top of my shoes causing me a lot of pain.  We soaked in the hotel's hot tub for a LONG TIME after this hike! 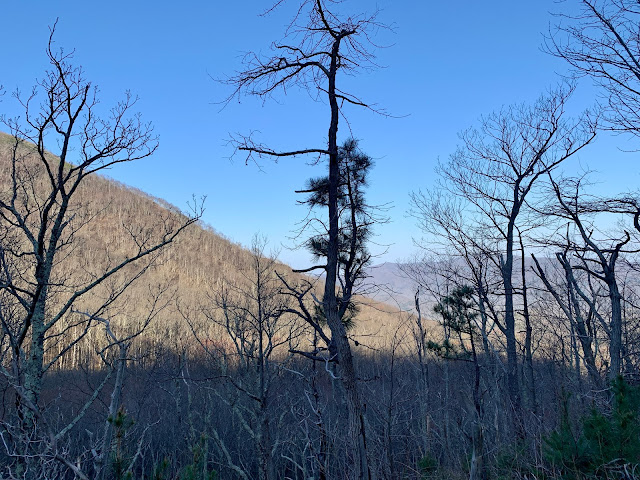 We came across this large fallen tree on our hike and of course hubby had to walk across it. 😀 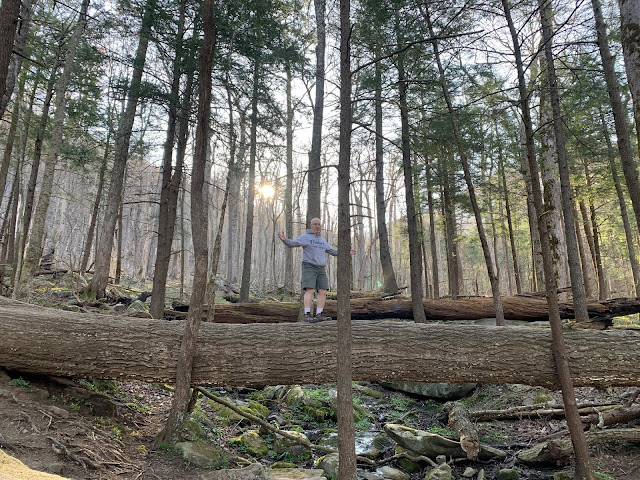 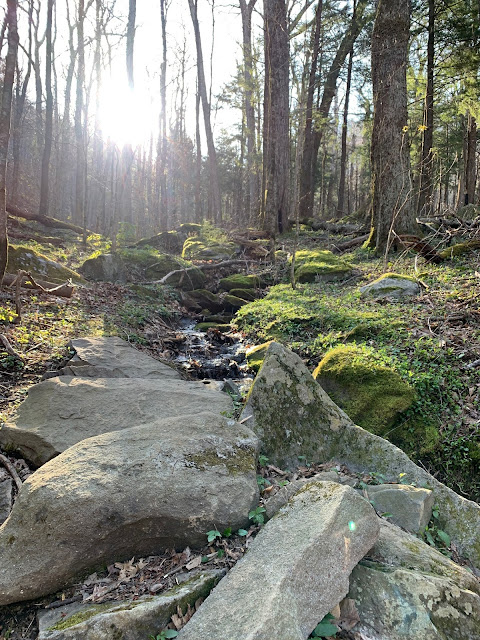 Because there is so much water in the park, Smokey Mountain National Park has many beautiful and rustic bridges crossing the water.  You will see many pictures of me standing on a bridge in many posts to come. 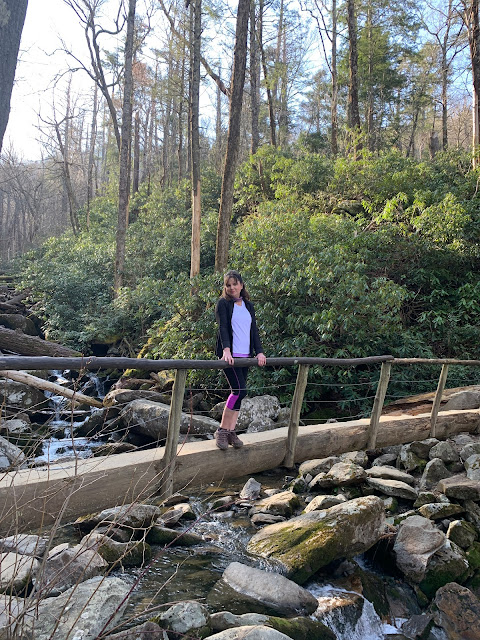 Because I'm afraid of both heights and water, I was always a little nervous crossing them and I couldn't help but wonder why they didn't put a railing on BOTH sides of the narrow bridge.  I was so tentative walking across these bridges on day one, but by day five, I was a pro.  At the end of this post, I included a bridge walk video that my hubby took of me.  He thought I was hysterical. 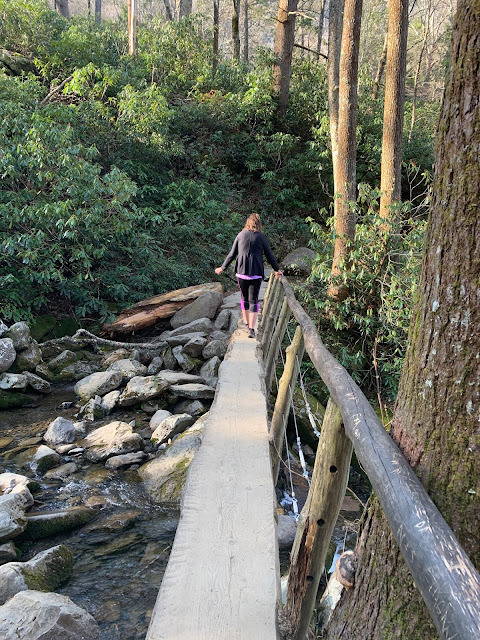 We always stopped and enjoyed the little falls we saw along the way.  It made the difficult hike much easier. 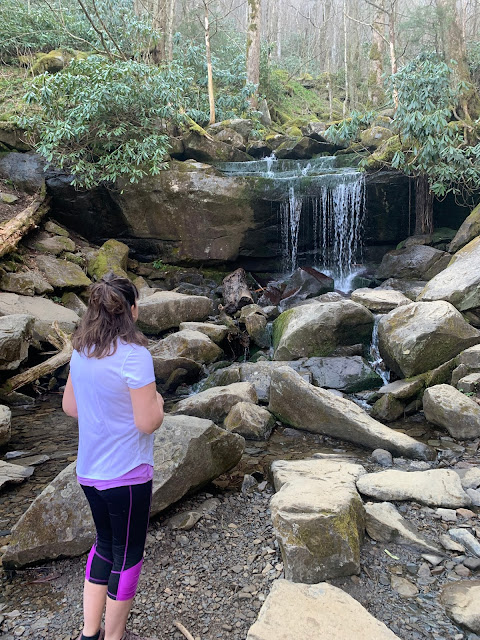 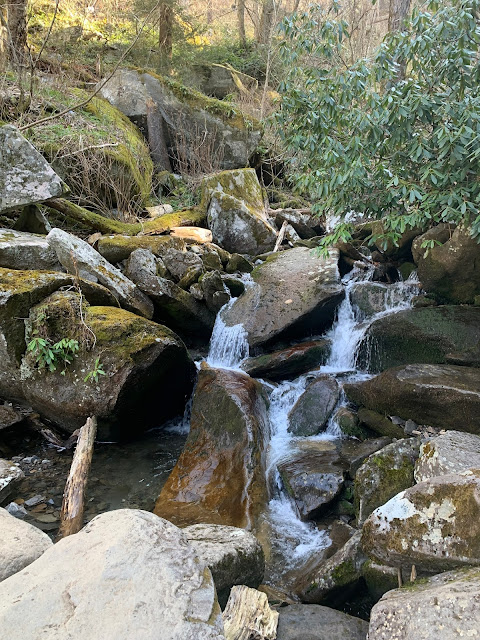 Finally we were rewarded for all our effort and reached Rainbow Falls!.  In this picture, we are standing farther downstream from it, you can barely see it through the trees. 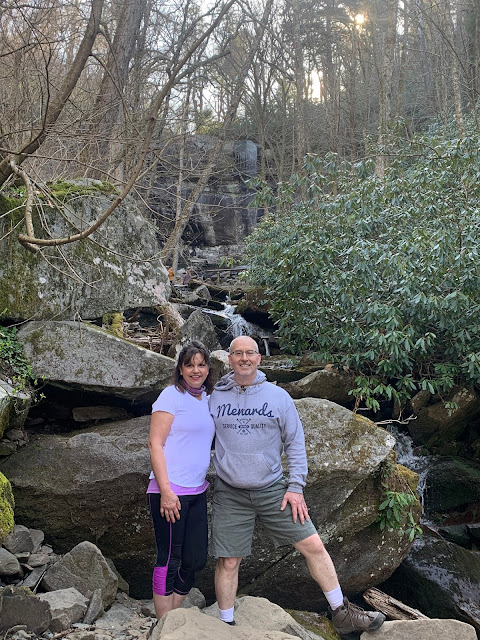 A rugged trail leads you further to the falls. 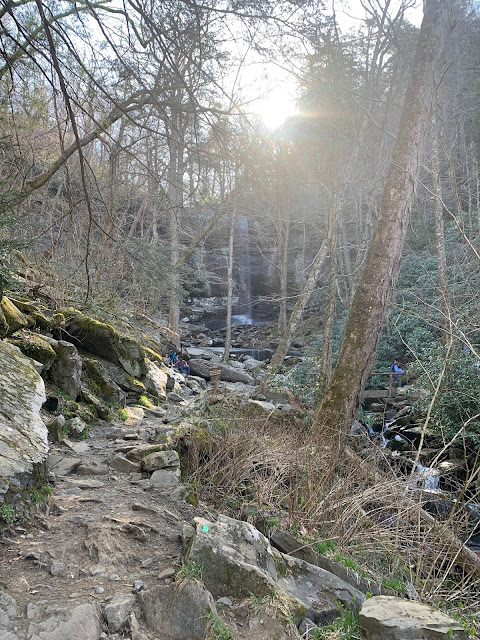 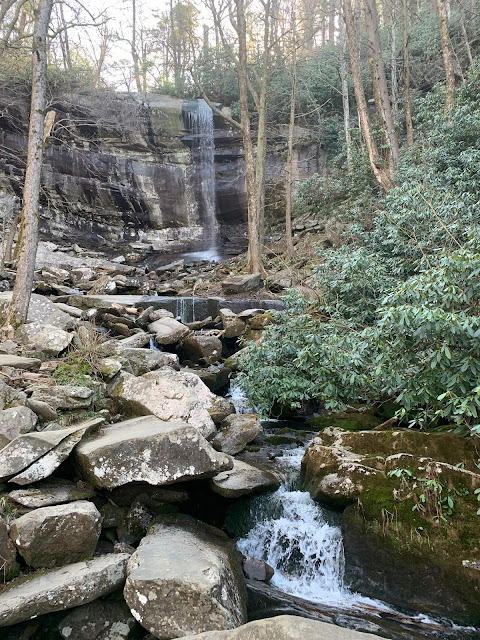 Once again, there is a rugged bridge in front of the falls that provides not only access over the river, but a great photo opportunity! 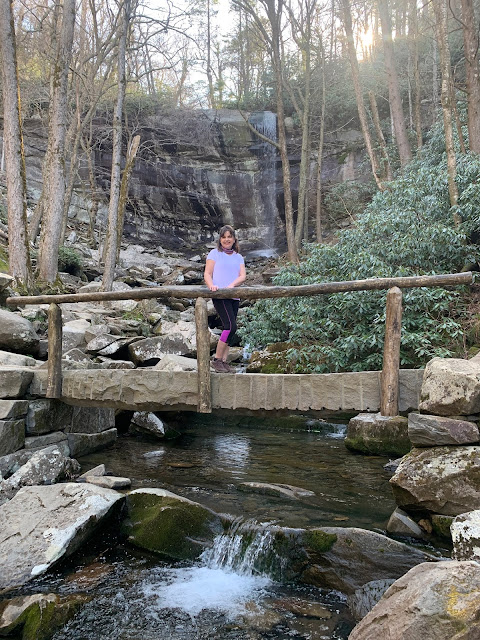 You are not suppose to climb on the rocks on, by, or near the falls, but of course, everyone did anyway.  There have been many injuries and deaths from people falling on the slippery rocks. 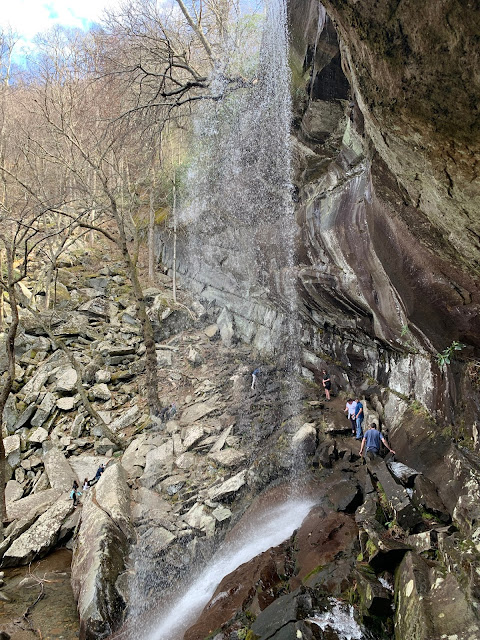 We had read that if you climb the trail a little further past the falls you can get above and behind the falls, so we decided to try it.  We hiked for about another half hour, and the trail seemed to be going farther and farther away from the falls.  After talking to several hikers coming back down the opposite way, we decided to turn around.  They told us the trail the trail lead to the lodge and not to the top of the falls. 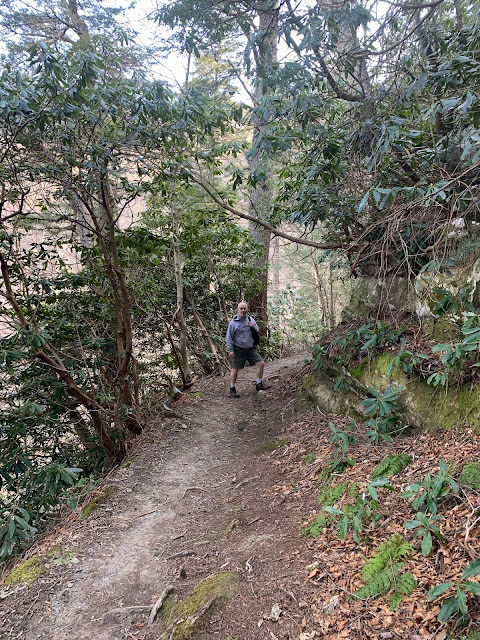 Once we were back down the trail and to the parking lot we were absolutely shocked to see how many people were there.  We were so glad we got up and hit the trail early!  The parking lot was completely full, and cars were lined up on both sides of the road for quite a distance! 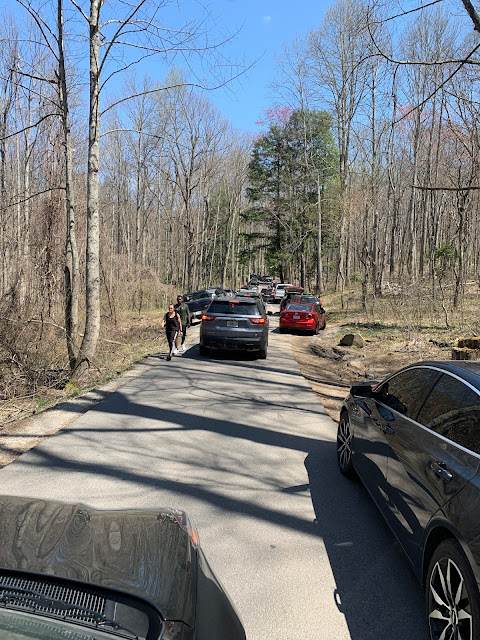 And now, here are some very short videos for you to enjoy!  If you don't have much time to watch them all, at least watch the first two waterfall ones.  I feel you can get a better sense of the falls watching a video of moving water than you can ever get from a photograph.