This is a continuation of a travel series to Utah.  To start at the beginning, go HERE and HERE.

In last week's travel post I shared our hike to the Lower Emerald Pools.  When we completed that hike there was still plenty of daylight so we thought we'd try another hike...the Pa'rus Trail.  I wanted to get back on the shuttle and get off on the Pa' rus Trailhead.  But my hubby, looked at the map and said "Why don't we hike this "Sand Bench Trail" to the Pa'rus Trail instead?"  Now before I continue on with this story, let me just say that my husband is well known for going off the beaten path and getting us lost as least once on every vacation.  I should have known better.  I should have stuck to my guns and said "No."  But as usual, I followed his lead and we began our adventure.  The idea of walking along the beautiful Virgin River sounded appealing to me.  However, we should have realized that although trails can look short on a map, in real life they can be much longer.  We apparently didn't notice the map scale before we began.

We started the Sand Bench Trail and at first all was well.  We saw wild turkeys along the river banks and enjoyed the beautiful river views.  But then we came across a sign that said "Trail closed due to rock fall".  UGH!  I can't even begin to tell you how frustrating that was.  It would have been nice if this sign were at the BEGINNING of the trail head or if this trail closure was mentioned in the trail map.  The most frustrating part of our visit to Zion was how many trails were closed.  At least six trails were closed due to rock fall when we there. It's very upsetting when you plan your trip for over a year and drive across the country, and then half the trails you want to go on are closed.  In the end, it didn't matter much anyway because we only had two days in Zion and we saw as much as we could in those two days.  Now we have something to look forward to when we go back!

Anyhow,  I digress, back to my story.  So after we saw the trail closure sign I again, wanted to double back and catch the shuttle to the Pa'rus Trail head.  Hubby however saw a "Horse Trail" sign and said "No, let's just take this horse trail!"  "I don't want to hike on a horse trail!  We don't even know where it goes.  It's not on the map!"  I said.  Hubby responds  "Oh, it's going north, it's going to take us right to the Pa'rus Trail.  It'll be fine."  As usual, I relented and it was a disaster.  The entire trail was deep sand and covered in horse manure. It was so difficult to walk in the sand.   We walked what seemed like hours, never seeing another human being.  I was pissed.  "Why did listen to him?" I wondered.  "Why do I always listen to him ?"  I was so upset because I had dreamt of seeing Zion for so many years, and we here such a short time,  I didn't want to waste any time on a trail buried up to my ankles in horse manure.  I couldn't even begin to tell you how many times I said "We should turn around and go back" only to have him respond "No, it can't be that much further".  It ended up being around 3.5 miles, most of it through forest.  But, when we neared the end, the views did get pretty nice.  And I don't think we would have saw these views had we not gotten on this detour. 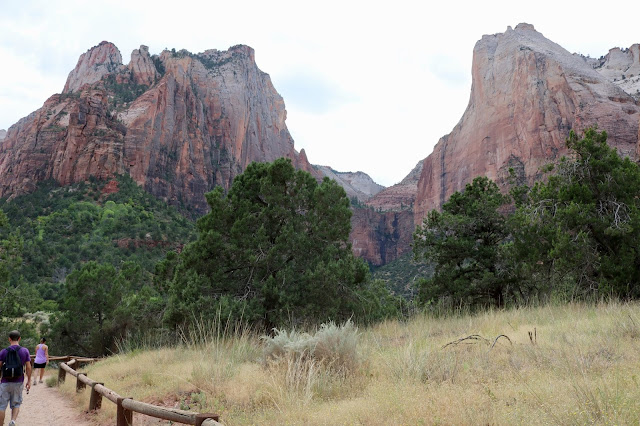 In the picture above, we are nearing the end of the trail.  The posts are where they tie the horses up for a break. 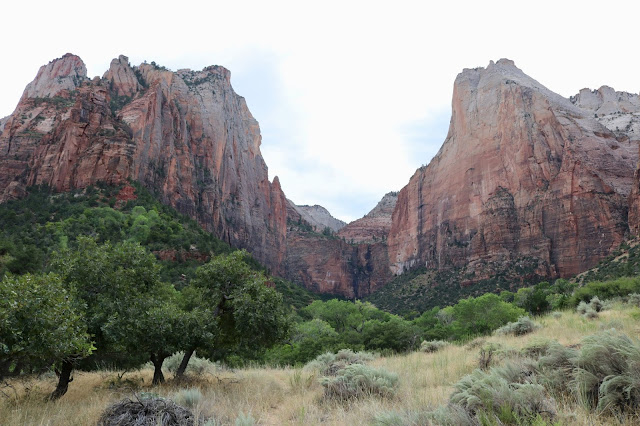 The nicest part of the hike was meeting a small herd of mule deer.  I could not believe how tame they were.  You can get so close to them before they wander off.  They are not afraid of humans at all. 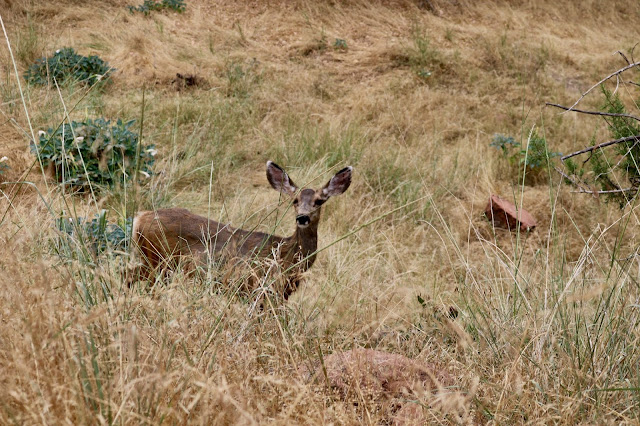 At the end of the trail you reach what is called "The Court of Patriarchs".  These rock formations are named after Abraham, Isaac, and Jacob.  You can also see views of Mount Moroni and The Sentinel.  Now, here's my tip.  You can get here without hiking 3.5 miles in sand and horse manure.  Just take the shuttle to Stop #4 and hike maybe a 1/4 mile past the stables, and you will come to this gorgeous bridge and incredible views. 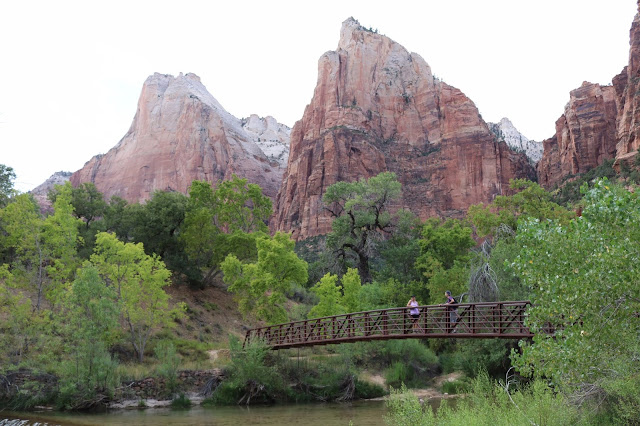 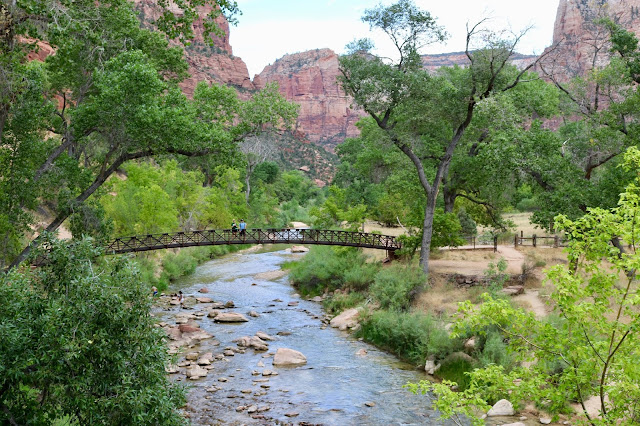 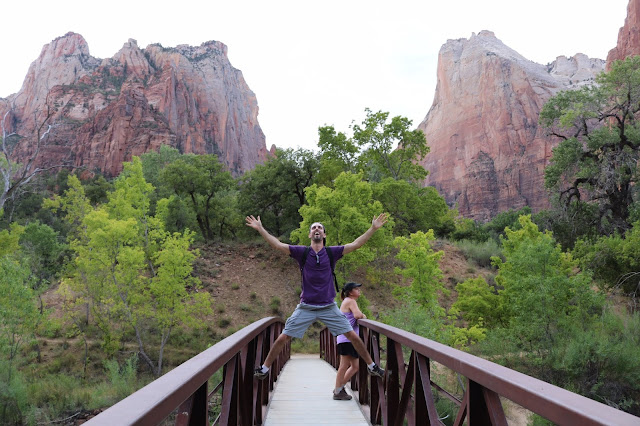 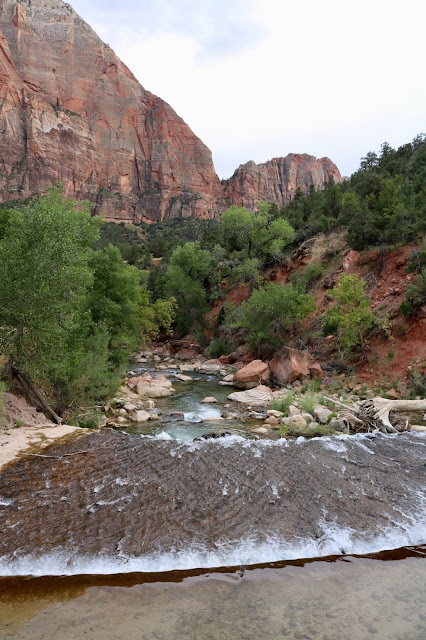 I have no idea what this powdery blue plant is, but it was growing everywhere in Zion.  I thought it was so beautiful,  especially when contrasted with red rock formations in the background. 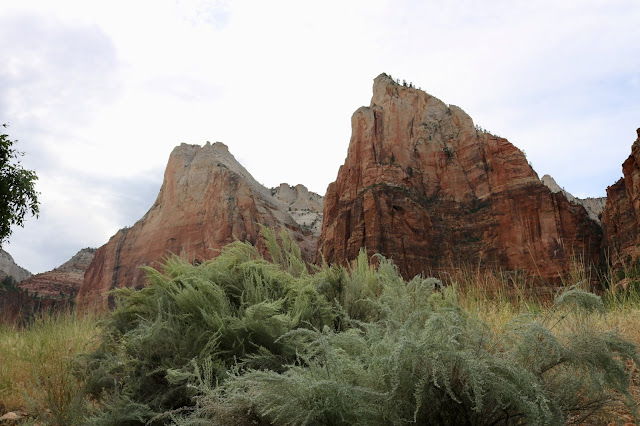 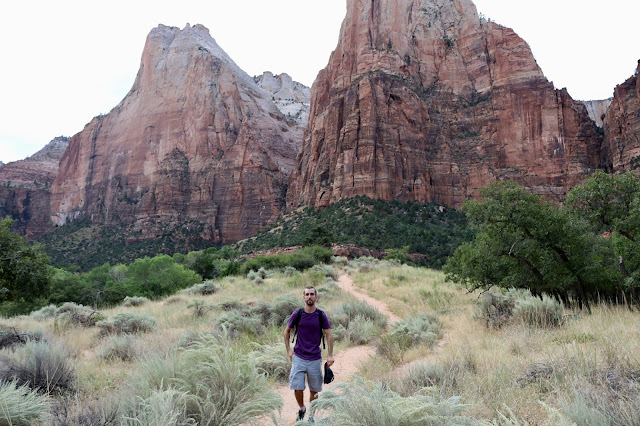 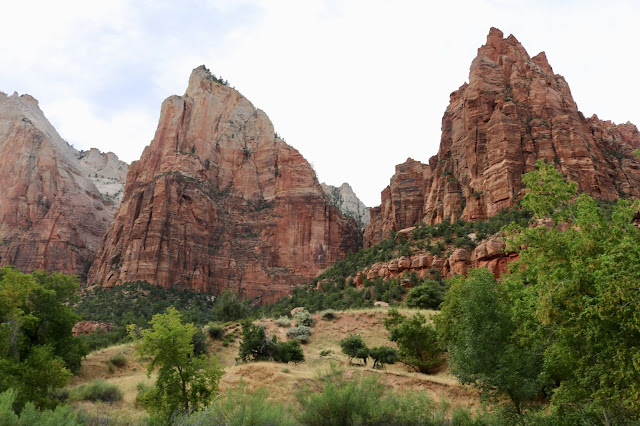 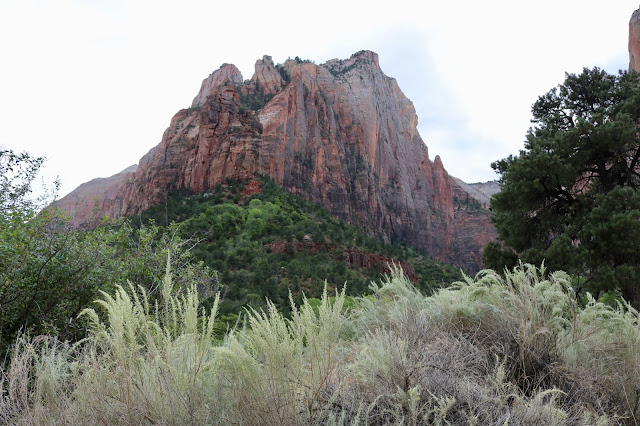 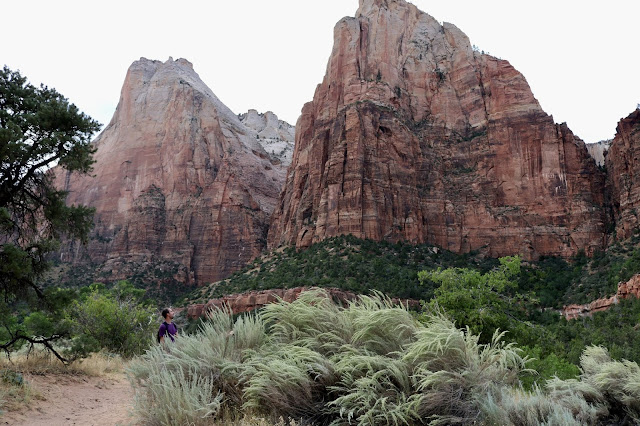 The Court of the Patriarchs tower almost 2000 feet above Birch Creek Canyon. 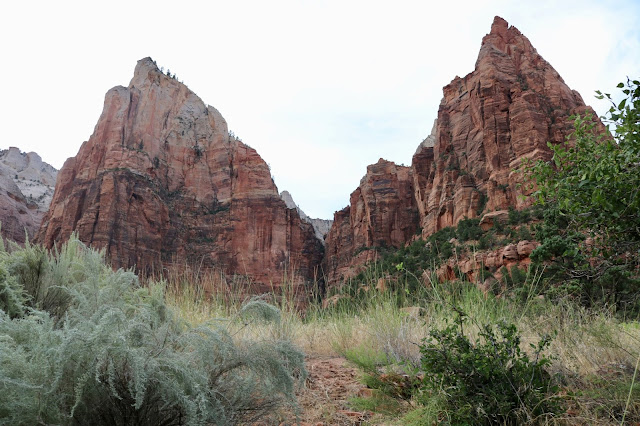 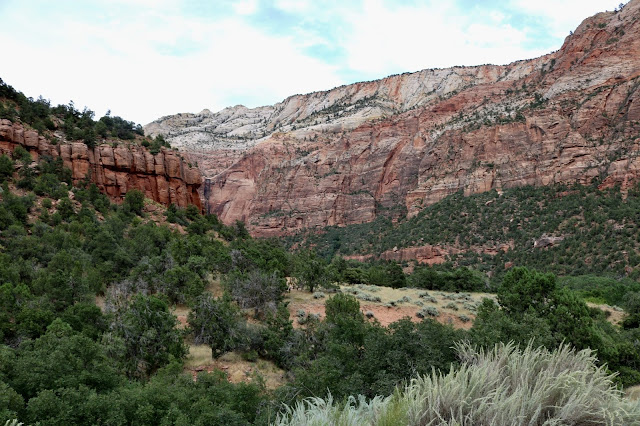 While hiking the end of this trail, I often felt I was in a movie scene from "Jurassic Park".  Then when I reading to prepare to write this post,  I came across that sentiment from others a lot.  There's something about the mix of forest, combined with the strange plants and the surrounding rock formations that makes everyone get that "Jurassic Park" feeling. 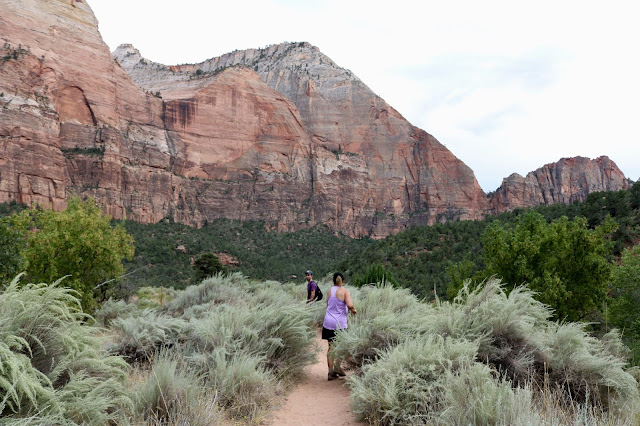 At the very end of the trail, we found the horses!  I don't know what it costs,  I wasn't even aware horse rides were available in Zion National Park, but I would have enjoyed the trail much more on the top of the horse!  If you start this hiking trail at bus stop #4, you will see these horses right away!  To actually take a horse trail ride though, you want to get off on bus stop #5.  That is where they start the trail ride.  The picture below is where they board the horses. 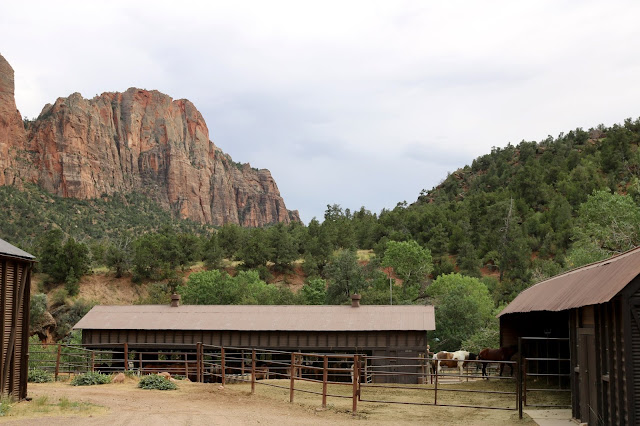 I would love to say that I'm happy I followed my husband on this off-the-beaten path trail, but I'm not.  If I could do it all over again I'd still take the shuttle. HOWEVER, had I not followed my hubby, we never would have not gotten these beautiful views of The Court of the Patriarchs because we would not have gotten off on Stop #4, we would have taken the shuttle straight to the Pa'rus Trail head.  So in the end, I guess it really was o.k. 😊

I've read several reviews of the Sand Bench Trail in writing this post, and everyone complains of the difficulty of walking in the deep sand and how hard it is on the legs...and also the horse manure.  But, if you want a quiet hike away from the crowds, this is the one!  The views at the beginning and end are the best.  The majority of the hike was more of a forestry area, but it's a great area for spotting mule deer!

Next week I will share our last hike of the evening (yes, we went on one more!) and that was one of my favorites...Pa'rus Trail!