What I've Been Cooking Lately: Salads and Desserts!

It's been a long time since I've done a recipe post.  I'll be honest, I don't cook much between May and October because I'm outside working hard in the garden!  The last thing I want to do after coming in from the garden all hot, sweaty, and covered in dirt is stand in front of a hot stove for hours!  haha!  And because of that, my diet consists mostly of what I can grab quick out of the fridge instead of planning a hot meal.

I absolutely love cold salads in the summer just for that reason.  I can mix them up ahead of time, and when I'm in a hurry I just pull the bowl out of the fridge and eat!  The problem is finding healthy ones that aren't soaked in mayonnaise!  I was thrilled to find the two salads I'm sharing with you today.  Both are very healthy and loaded with protein. 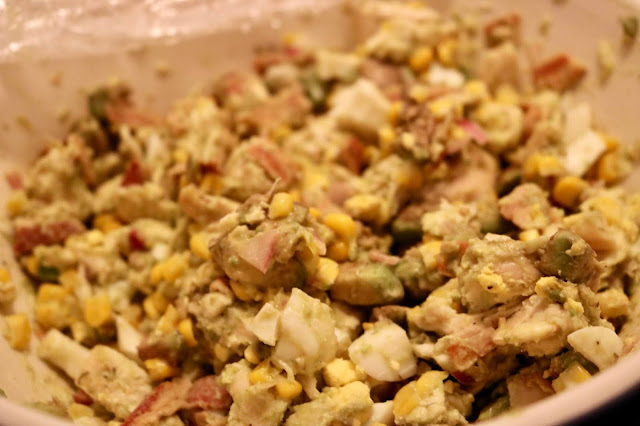 This salad is absolutely delicious!  It has avocado, chicken, bacon, and boiled eggs...so it's loaded with protein.  You can substitute the regular bacon for turkey bacon if your looking for less fat and calories.  You can actually substitute or add other items in this recipe too.  When reading the comments, some people didn't like the corn so they substituted cherry tomatoes or celery instead.  I didn't really care for the corn in the recipe either so I might try that...or peas!

One suggestion:  don't mix well like it says in the instructions.  It turns the salad brown and visually unappealing.  When you look on the website, the pictures are so pretty and bright, and it's because the ingredients are not "mixed well" but separated or slightly folded in.  If I were to make this recipe again, I'd just mix the dressing with the chicken, veggies, and bacon and then layer the avocado and egg to the side as pictured on the website.

Because of the avocado, the dish doesn't keep long in the fridge.  It needs to be eaten within a day or two, or it gets even browner.  So it's probably best to make this dish when you have a crowd of people over to help you eat it. 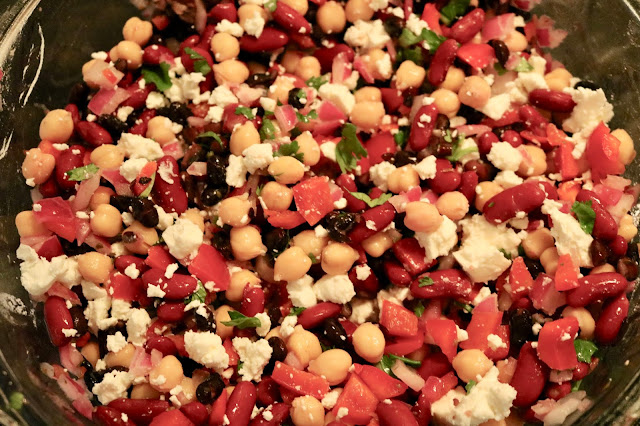 This bean salad was a hit with my granddaughter.  She saw me eating this and begged to try some.  I think she was attracted to the bright, pretty colors.  It was great finger food for her.  I could put some beans on her plate and she picked them up herself and put them in her mouth saying "Yum!"  every time!  Great nutritious finger food for toddlers!

It has three kinds of beans, red pepper, and feta cheese bathed in a red wine vinegar sauce...what's not to love?  Another high protein salad with no mayo:  win, win!  And, unlike the chicken salad above, it  looked pretty and kept for a long time! 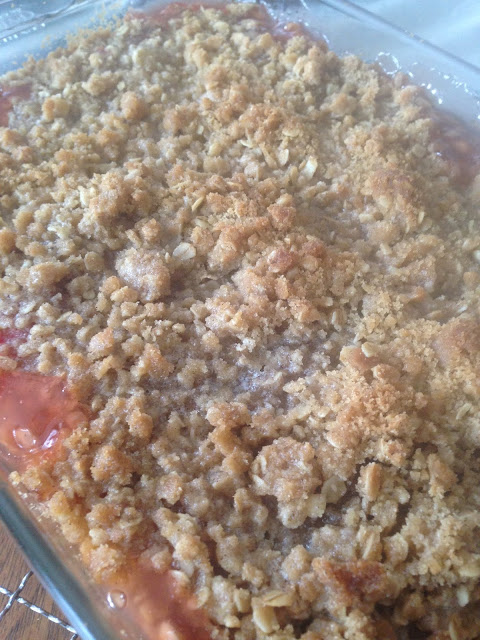 I know there is nothing original or creative about this recipe, but I'm sharing it with you because it is the first time in my life I've made Rhubarb Crisp.  I have memories of my husband's grandmother cutting the large, strange, weedy plant from her garden and creating a delicious dessert with it.  It always amazed me that something so odd looking could taste so good.  Fast forward thirty years and I was in my friend's garden when she asked me if I wanted some rhubarb.  I said "Sure!  I'd love to try making some Rhubarb Crisp!"  So I looked up some recipes and gave it a try!

It tasted just like "Grandma use to make" and my hubby was thrilled when he came home from work and saw his grandma's Rhubarb Crisp waiting for him! 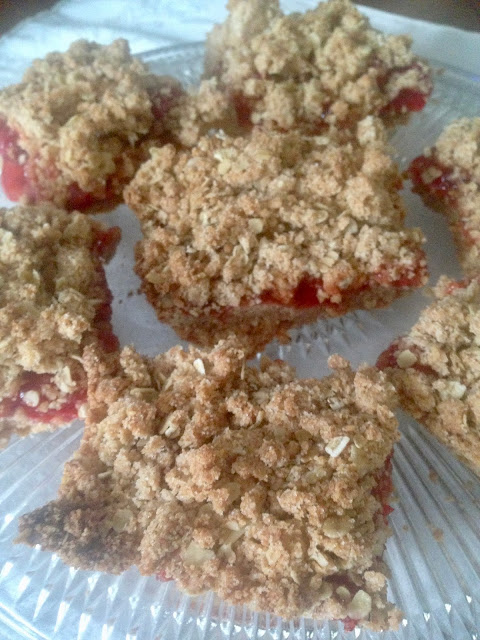 Wednesday was my husband's and my 31st wedding anniversary.  We already celebrated two weekends ago when we went to The Paine Art Center and Gardens in Oshkosh, Wisconsin, but I wanted to do something to mark the actual day, so I made him a card and this dessert.

The dessert taste delicious and was easy to make, my only issue was that it called for a lot of flour and sugar, and I ended up not even using it all.  When I was assembling it, it seemed the ratio of flour mix to cherry filling was way off.  So I followed my better judgment and didn't use all of it and put the excess in the refrigerator to make an apple crisp another day.  If you make this recipe, I would suggest only three cups of flour and then omit the appropriate amount of sugar as well.  Or, just save the excess for another dessert like I did.