A few weekends ago my husband and I went to the Ellsworth Cheese Festival.  We had never been there before and we didn't know quite what to expect, but eh, we love cheese curds so let's give it a try!

The Festival is a two day event held every the last full weekend  in June to celebrate the town's destination as the Cheese Curd Capitol of Wisconsin. 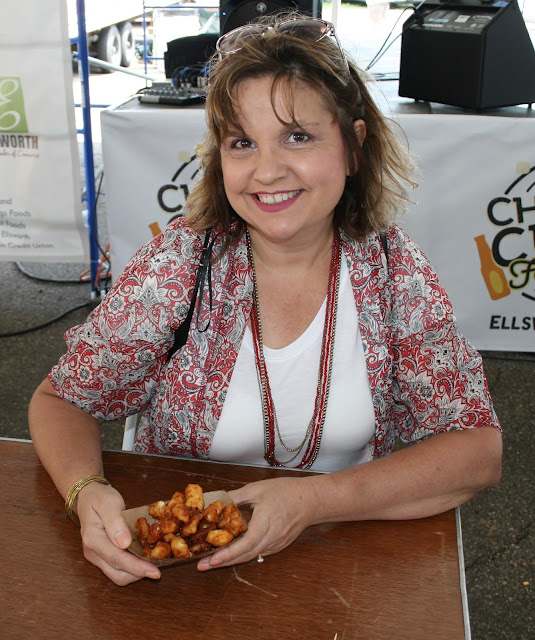 Ellsworth is about an hours drive from our home in Northwestern Wisconsin.  The Festival was held at East End Park, but the Ellsworth Creamery was also open so we stopped there first. 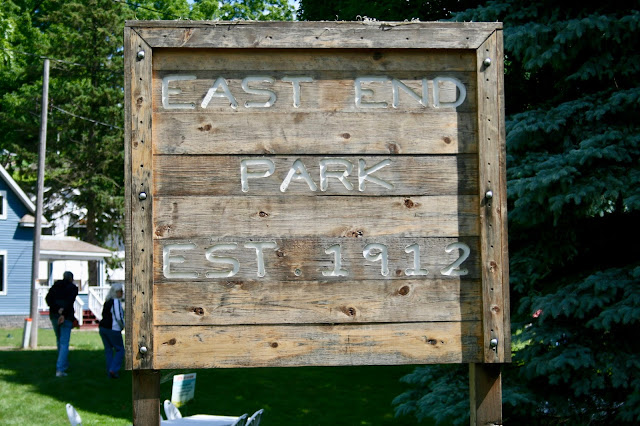 It was quite an impressive creamery.  There is a retail store inside where we purchased a delicious smoked cheddar spread and some ice cream...but more on that later! 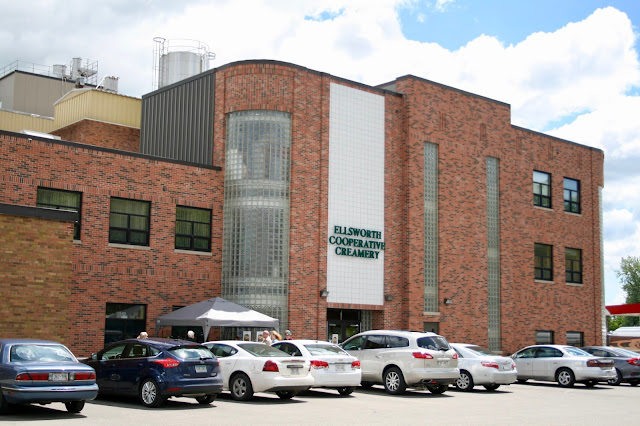 After checking out the Creamery Store, we left our car in the parking lot there and walked over to the festival.  It was a short walk, but they also had wagons come and pick visitors up for free too. 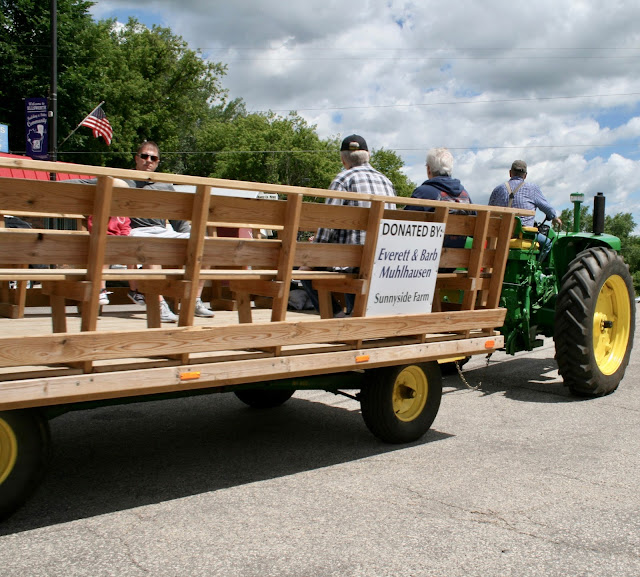 Although it was a chilly day (I can't believe I'm saying that in summer) we enjoyed the walk to the festival because we got to see a little bit of the historic town.  We thought this little bar painted in Green Bay Packer colors was just the cutest! 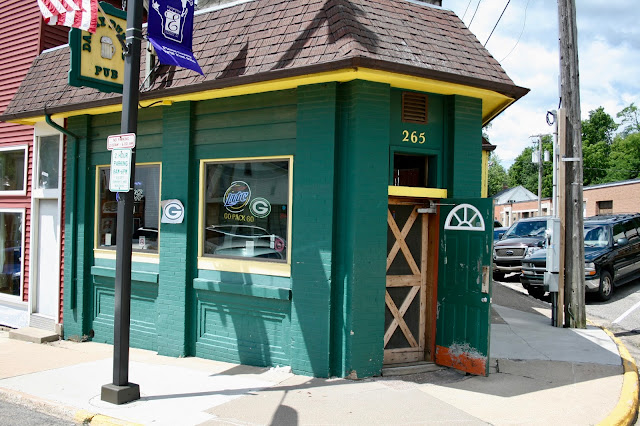 Because it is a two day event, there are different activities scheduled throughout the weekend.  We were there on a Saturday morning and just missed the pancake breakfast, darn!  But we did get to see the Antique Tractor Show. 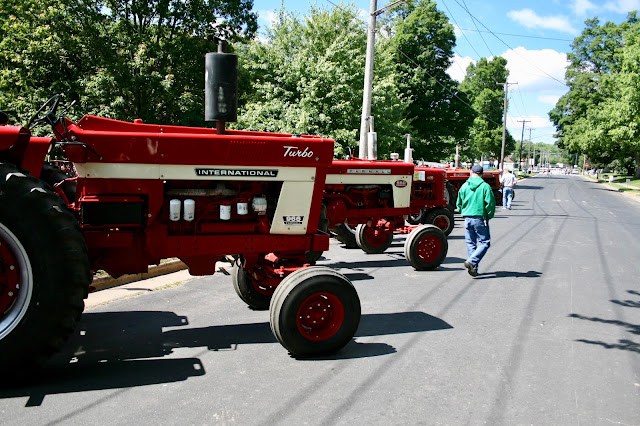 Here's a couple of my personal favorites: 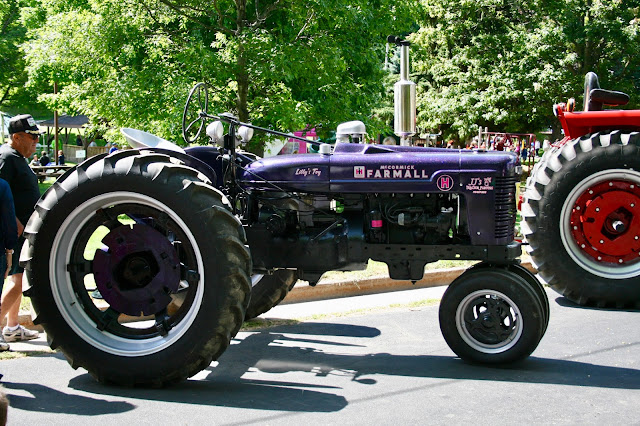 There were lots of activities for the children like face or body painting. 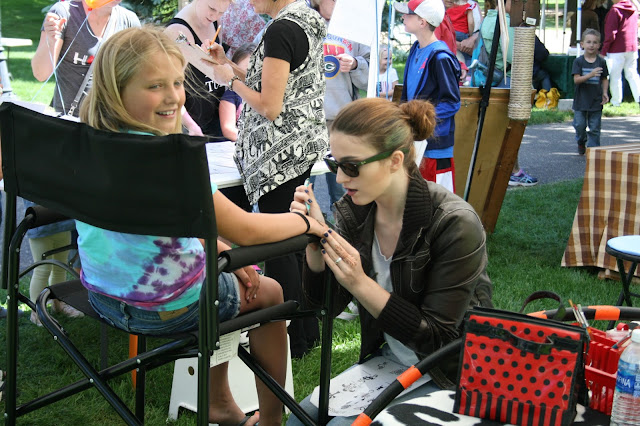 A maze of hay bales...although I think the kids practically destroyed all the bales by the time we saw it.  They were still having fun though! 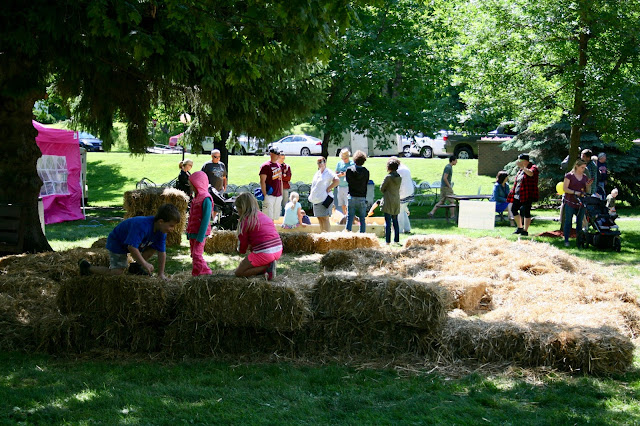 A corn sandbox.  My husband thought this was a great idea.  Me, not so much.  All the critters in our yard would want to eat the corn! 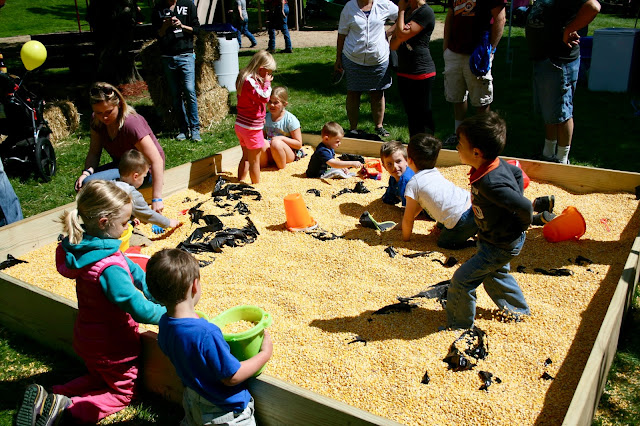 And our favorite children's activity of all...the train!  We thought this was the cutest thing.  The engine portion of the train is a tractor that's made up to look like a train engine and all the train cars are barrels.  How fun eh? 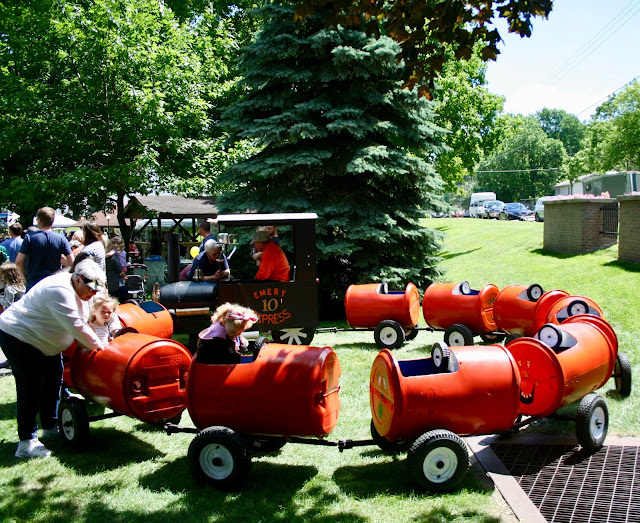 The "Engineer" just drove around the kids all around the park.  They had so much fun! 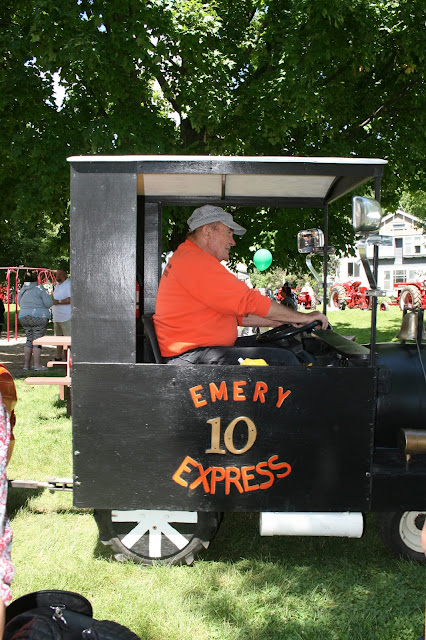 Seriously, whoever though of this idea and created it is a genius! 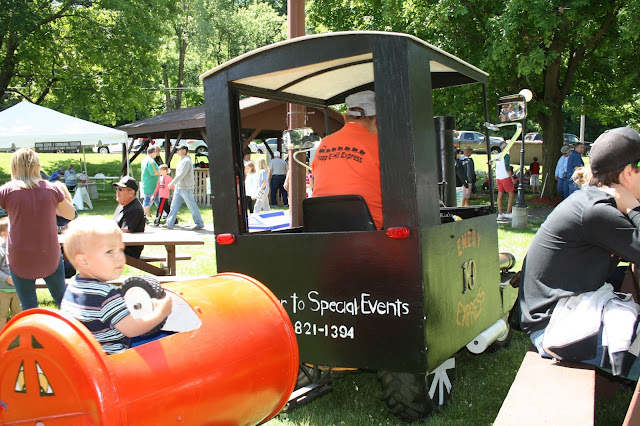 Besides children's activities, they also had arts and crafts vendors.  This little log cabin held festival items for sale inside. 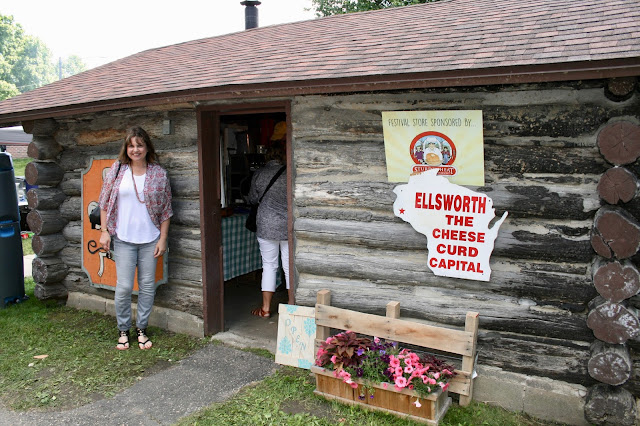 In addition to all the regular children's activities and arts and crafts vendors, they also had plenty of food vendors.  We thought this pizza vendor with his portable wood stove was quite interesting. 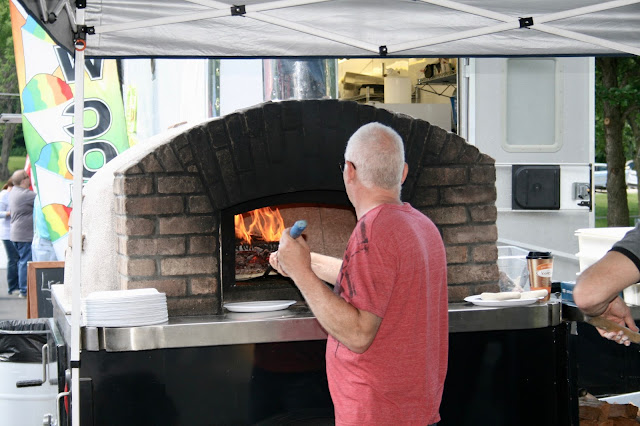 But we were there to try the Fried Cheese Curds, so off we went to the food tent.  Here they are breading, frying, and placing the finished curds in little baskets. 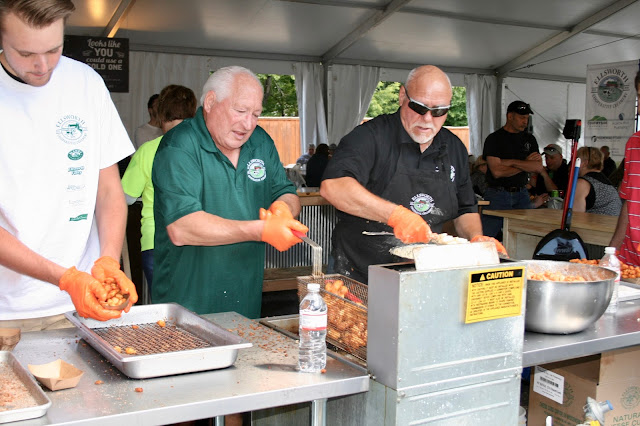 They had three different kinds of fried cheese curds available along with multiple dipping sauces. 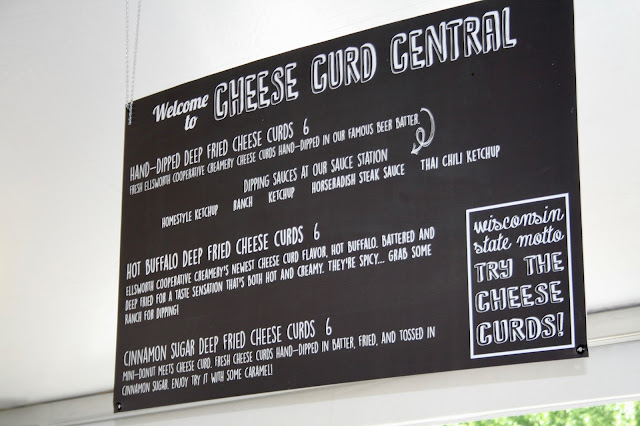 We chose the plain hand dipped deep friend cheese curds, and oh my,  they were delicious!  In fact, they were the best cheese curds I ever had in my life.  We loved them so much we wanted to buy more, but the line was so ridiculously long we didn't want to stand in it again. 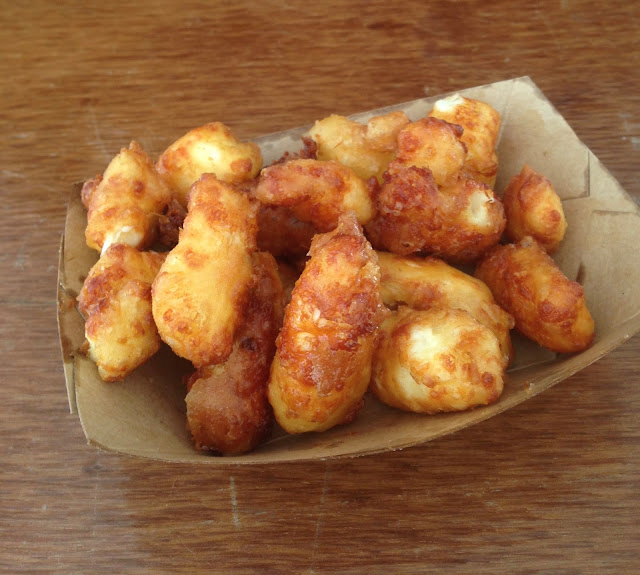 After sampling the fried cheese curds we headed out to find more food.  I must say, we were disappointed that there were no more cheese curd dishes/options when we were there.  It says on their website  that there is a "wide variety of cheese curd dishes" but we didn't see anything other than the fried cheese curds.  So we chose food from one of the vendors but we were not happy with that meal. It was advertised as "Traditional Greek Food" but it was probably the worst gyro I had in my life.  Oh, well, onto dessert!

At the time of day we were at the festival, The "Meet a Farmer Milk and Cookie Pairing" was going on.  Later in the afternoon was an "Ice Cream Tasting" (darn, missed it!).  But the milk and cookie pairing was fun.  For $1.00 you received the tiniest little portion of whole milk plus a cookie.  The farmer pointed out that most chocolate milk is made with low-fat milk and you rarely find it made with whole milk.  He said it makes a huge difference in taste, and he was right! 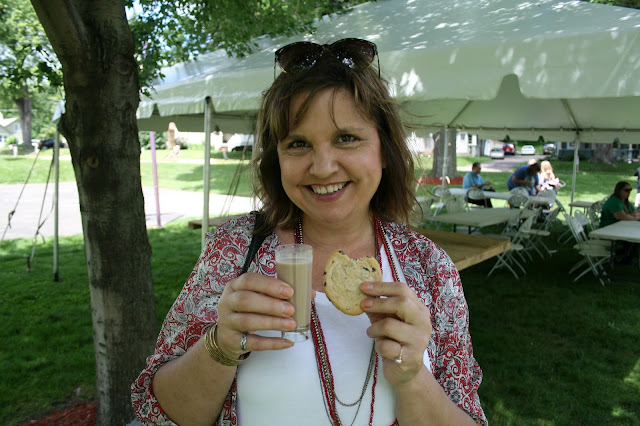 The festival also had musical guests, and cooking demos, but again, since we were there in the morning, we missed all of those.  I think if we go back next year, we will have to pay closer attention to the schedule and arrive at the festival when they are doing activities we are interested in.

I should also mention that in addition to the Milk and Cookie Tasting and the Ice Cream Tasting the festival also has a Corks & Kegs Tasting.  For $25.00 you can taste over 40 craft beers, wines, and hard ciders from the Midwest plus sample unlimited appetizers.  My husband and I do not drink alcohol, so we didn't participate in this activity.

After we had seen everything there was to see at the time of day we were there, we decided to head back to the Creamery to buy some cheese to take home and get some ice cream.  They served ice cream inside the Creamery store.  My husband got a sundae and I got a vanilla malt, and it was delicious!  And, I have to take a minute to promote the Ellsworth Creamery Cheese Spread.  If you're ever in Ellsworth you have to stop and buy this spread!  IT IS SO GOOD!  I purchased the smoked cheddar and I ate it up in a few days all by myself.  The flavor is so good, but what I enjoyed the most was the texture.  It spread on a cracker like butter! 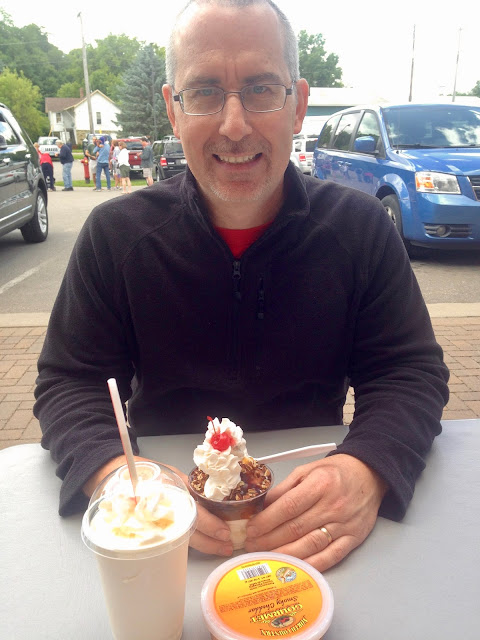 The Creamery had picnic tables set outside the store.  Our table was right next to this gorgeous mural.  Isn't it wonderful?  I love how it has the Creamery in the far left, the date the Creamery was established, and all the things Wisconsin is known for:  rolling hills, blue skies, cows, and dairy farms! 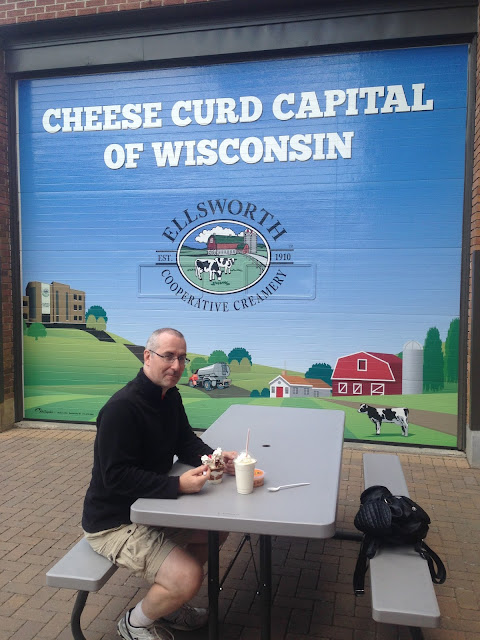 We had such a fun time at the Ellsworth Cheese Curd Festival despite a few disappointments.  The fried cheese curd line was unbearably long.  They only had one fryer going and a handful of volunteers working.  It was a long wait when we were there in the morning, but when we were leaving the festival the line was four times longer!  It was a shame, because we would have loved to had bought more, but we didn't want to stand in that long line.

Another disappointment was that I was expecting a lot of cheese curds options for sale or to taste at the festival, and there wasn't anything.  There were a handful of samples at the Creamery, but I didn't see anything at the Festival.  Now, maybe I was there at the wrong time...I don't know.  But I think if you are going to call yourself a "Cheese Curd Festival" there should be lots of cheese curd food dishes, and tons of variety of cheese curds to purchase.  Maybe even a demo or film or educational booth detailing how cheese curds are made?  Or how about a factory tour at the Creamery?  And what about cows?  Wouldn't it be fun to have a pen of some live cows, calves, or goats for the children to pet?

So would I go back...yes, just for those fried cheese curds...they were delicious.  Except next time I will order more than one basket!  And I would also check the calendar of events ahead of time to make sure I'm there when the activities I want to see are going on.