This is a continuation of a Travel Series of my vacation to Myrtle Beach.  To start at the beginning go HERE.  The rest of the post, in chronological order are  HERE and  HERE.

The park is only three miles from downtown Myrtle Beach.  The drive into the park is quite lovely with large shade trees on either side of the road. 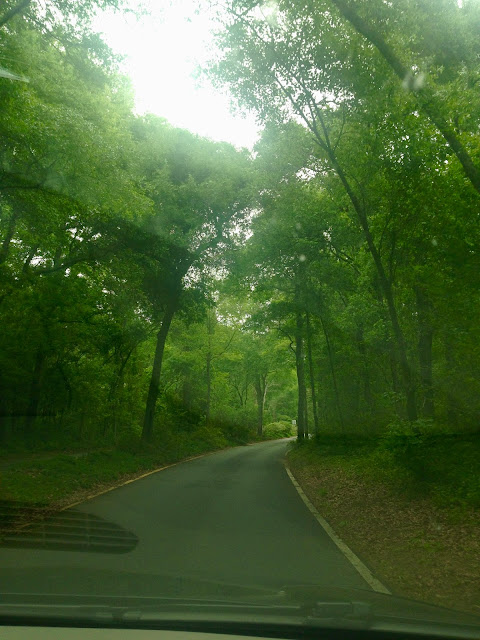 Myrtle Beach State Park doesn't have quite as much to offer as Huntington Beach State Park.  It's basically a small park along the ocean with camping, picnic tables, two short nature trails, a "free" pier, and a gift shop.

If you noticed I high-lighted "free" pier, because most ocean piers require a fee to walk on.  This one does not, so if fishing is your thing, you can fish from the pier without paying a fee. 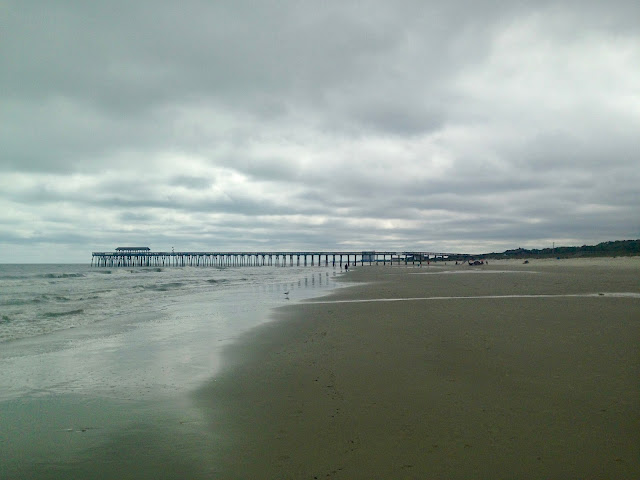 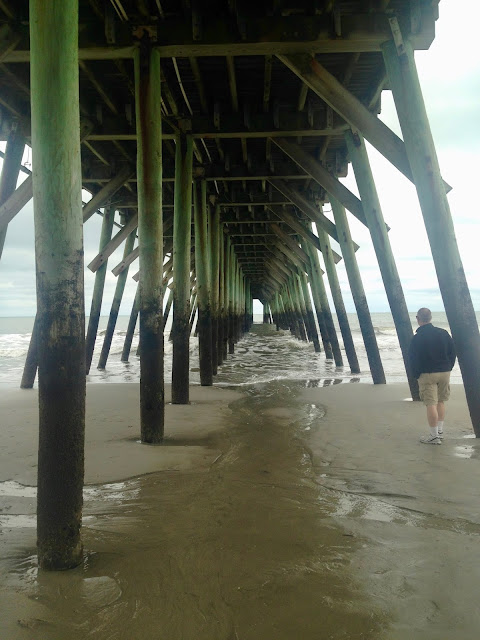 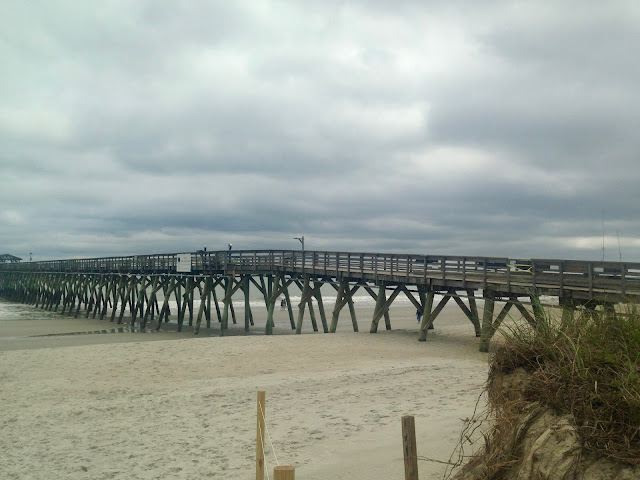 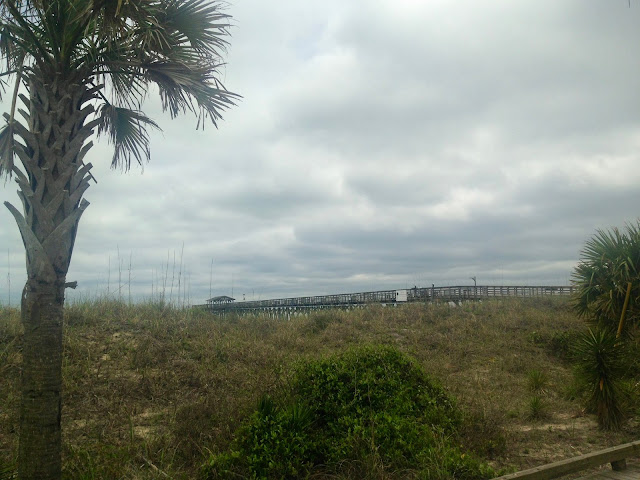 My favorite part of Myrtle Beach State Park was the boardwalk.  It's a nice, well-maintained scenic walk along the ocean. 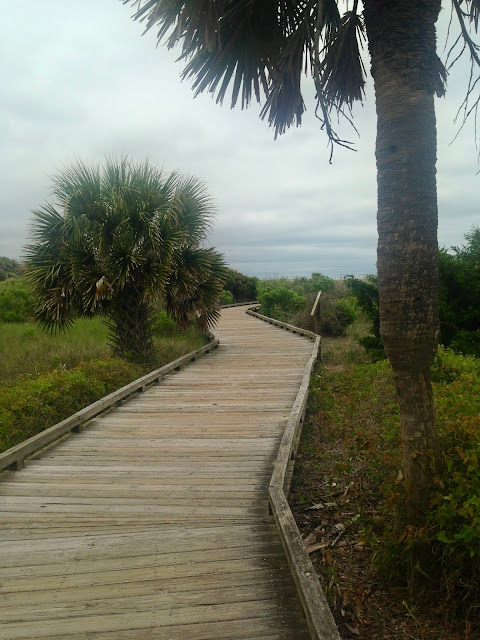 In this photo you can see Myrtle Beach in the distance. 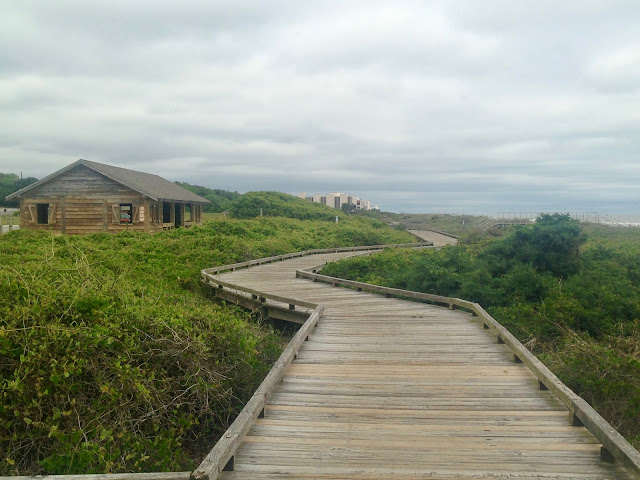 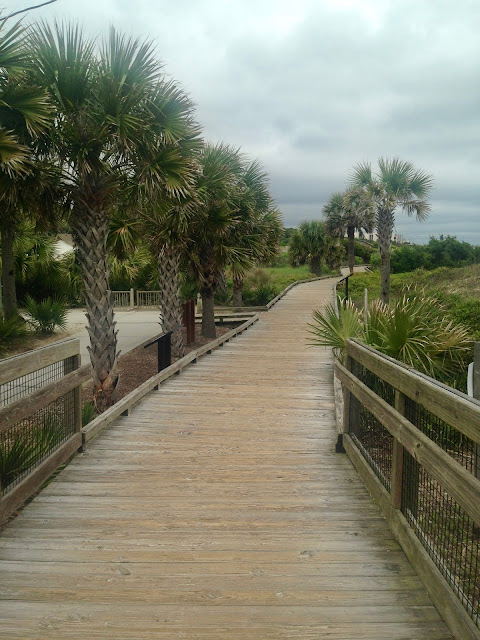 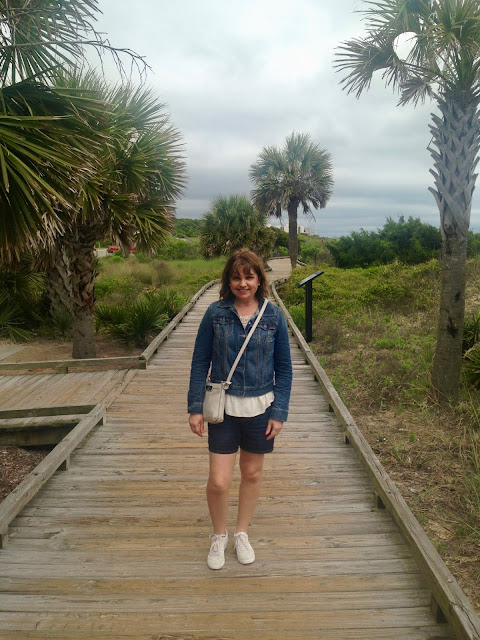 After years of vacations in Colorado, New Hampshire, and Utah, we got a kick out of seeing this elevation sign. 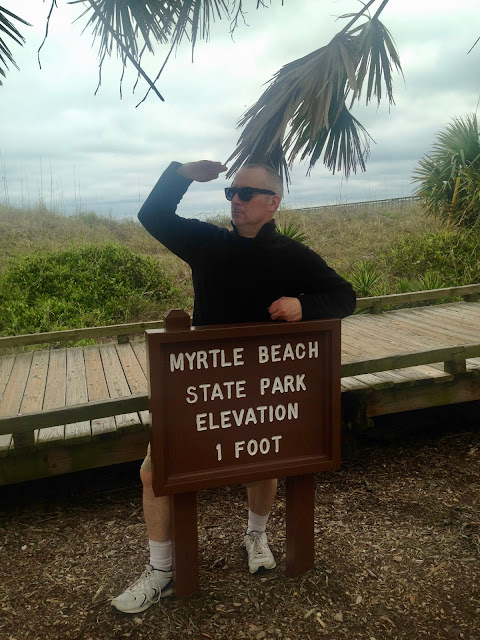 We didn't walk any of the nature trails because we were already hiked-out from visiting Huntington State Park.  We only popped in to see this park because it didn't cost anything and it was on the way back to our hotel.

The park does have two trails:  The Sculptured Oak Trail and The Yaupon Trail.    They are both short and easy and focus on these unique oak trees that are shaped by the strong ocean winds. 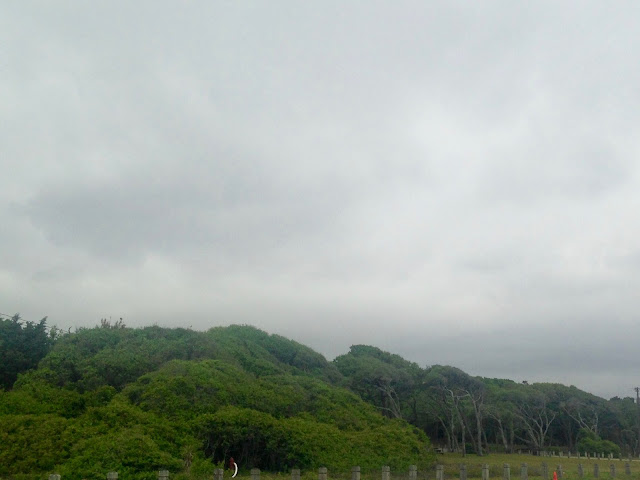 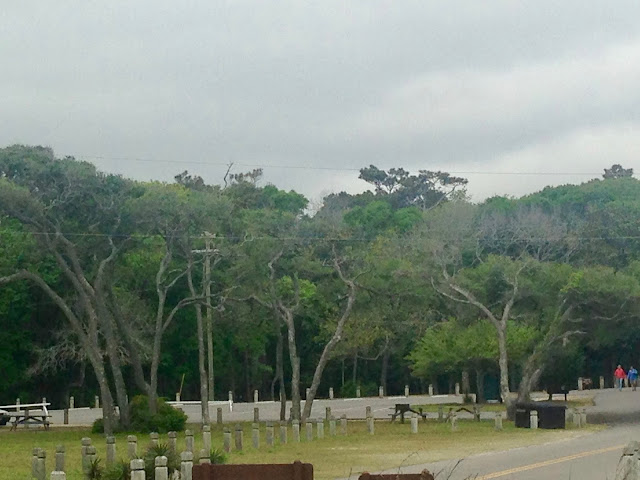 There were many nice picnic areas and playgrounds in this park. 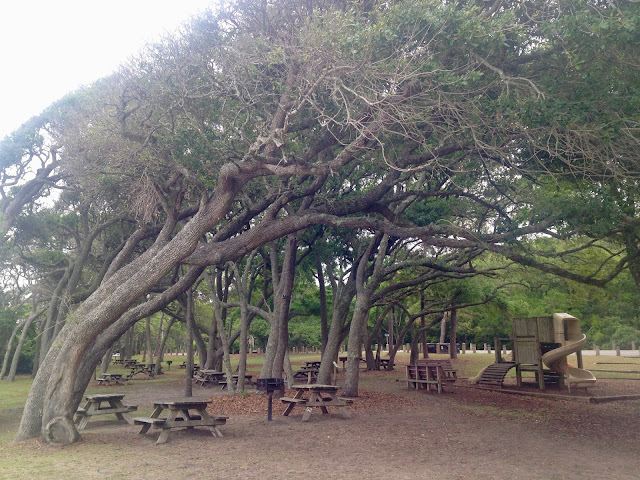 After we drove around the park for awhile, and walked along the boardwalk and beach, we then headed to Murrell's Inlet.

Murrells Inlet is a historic fishing village in South Carolina.  We went to the Murrell's Inlet Marshwalk area where all the dining is.  This place got a lot of great reviews for great food and most reviewers advised going at night when it was all lit up.  We unfortunately were there in the afternoon and most of the restaurants did not open until 4:00 p.m.

We did find one restaurant that was open so we went there.   The name was Marshview Seafood Kitchen and Bar.   I was a bit chilled as it was a cloudy, drizzly day so I asked for a cup of coffee (it was on the menu).  The man said there wasn't any coffee available because he forgot to make coffee today.  My husband and I were so amused by this that we couldn't even be angry.  We just laughed.  That was the most ridiculous thing we were ever told in a restaurant before.  Seriously?  You can't be bothered to put a pot of coffee on for a paying customer?  If someone unexpectedly knocked on my door at home, the first thing I would do was start a pot of coffee.  Oh, we laughed and laughed at that one, and we're still laughing at it a month later!


After we put our food order in, I walked around a bit outside and took pictures. It was a very casual restaurant located right on the water.  They had huge garage doors that opened up onto a deck. 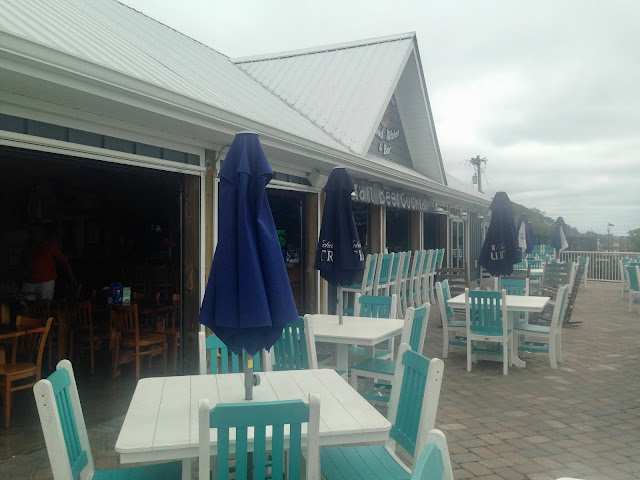 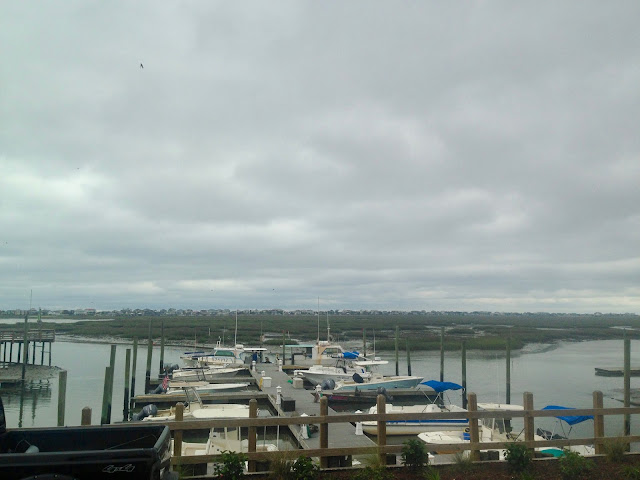 Because it was cold and drizzly, we did eat inside, even though it was still open to the outside.  But darn, I wish I could have had that cup of coffee to warm me up. 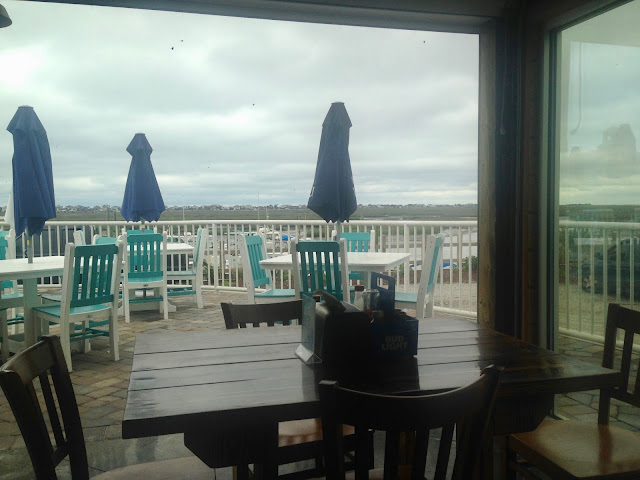 The restaurant had a very casual atmosphere.  You place an order at a window, find yourself a seat, and they bring your order to you.  We ordered a bowl of soup and fish and chips to share.  When my husband placed his order the cook said "If you like your food, come back and tip the cook.".  We were very perplexed by that comment and didn't know what to do.  "Tip the cook?" we asked.  Isn't that what the cost of the food is for and you tip for good service.  However, there wasn't any service.  We placed the order at a window.   My husband just decided to be a nice guy and went back to the window to tip the cook.  However, the cook was no where to be found and there was no tip jar.  So he asked another employee where he was to leave the tip and told her what the cook said and she said "He said that?  No, we don't expect you to tip the cook!"  So then my husband was worried he got the cook in trouble.  Here he tried to do what he thought was the right thing, and ended up doing the wrong thing.  Another thing to laugh about.

So by now you're probably wondering how was the food.  The clam chowder soup was absolutely delicious.  The best I've ever had.  However, it was pricey.  A cup was $4.50 and a bowl was $7.50.  We ordered the bowl, but was surprised at how small it was for the price.  It was more what I would think a cup size serving would be.  The bowl was very shallow. 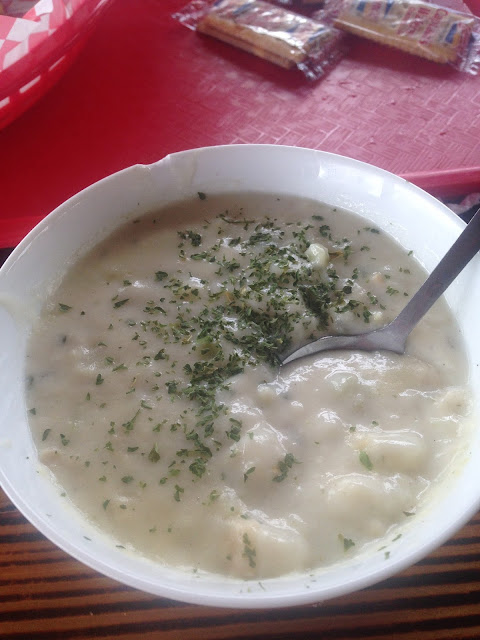 The flounder basket was $12.49 and came with two fish and a side of fries.  The fish was very, very good.  But we thought the french fries were over cooked. 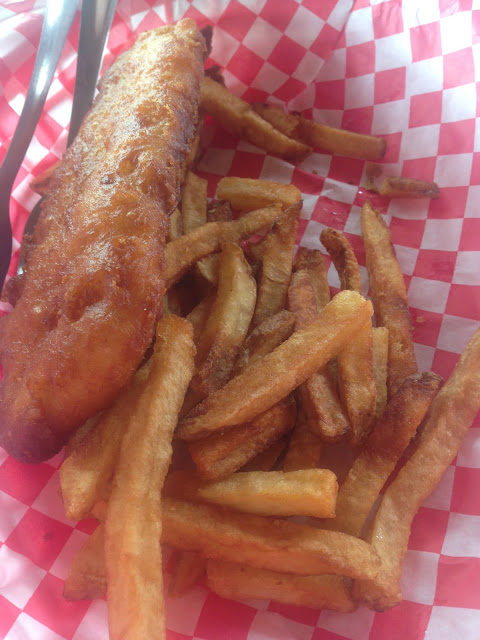 So after all that, would I recommend this restaurant?  Probably not.  It could have just been a bad day, who knows.  At least, our experience there gave us some good laughs and we "made a memory".  I know I've mentioned in previous posts that I like to try local restaurants when traveling and my husband prefers chains.  I want to experiment and try something new, but he like to stick with something safe.  On this day, we chose to go to a local establishment and had one disaster after another.  So the next day we went to Texas Roadhouse for dinner, and guess what?  It was delicious and we had perfect service!  Too funny.  I'm starting to think hubby might be right on this one.

So what about you?  Do you like to try local establishments when traveling or do you prefer to stick with what you know and go to a chain restaurant?  I'd love to hear from you!