Day Four of Our Vacation in Missouri - A Visit to Branson

Hello!  I hope everyone had a wonderful 4th of July weekend.  I had to work, but I didn't mind.  I like getting time and half for working the holidays!

Today's post is all about our day trip to Branson, Missouri.  I must admit, I've never heard of Branson, Missouri till I met my husband.  Everyone that ever visited it described to me as a 'Christian Entertainment Town' or a 'Little Vegas'.  I'm not one for touristy things, I prefer to see what God created when I'm on a vacation, not man-made things.  Unless it's something very old with a lot of historical significance.  So, I never had any desire to go to Branson, but, since we were visiting my husband's family, we decided to see the town of Branson too.

My daughter, read about a Christian Theatre Group that does Christian Musicals in Branson, and Lancaster, Pennsylvania.  Their name is Sight and Sound and they do several different musical productions a year. We were here to see their production 'Joseph'.  Here is the outside of their building.  I've been inside a lot of famous theaters and fine arts center in my life, and this was one of the best.  What a facility! 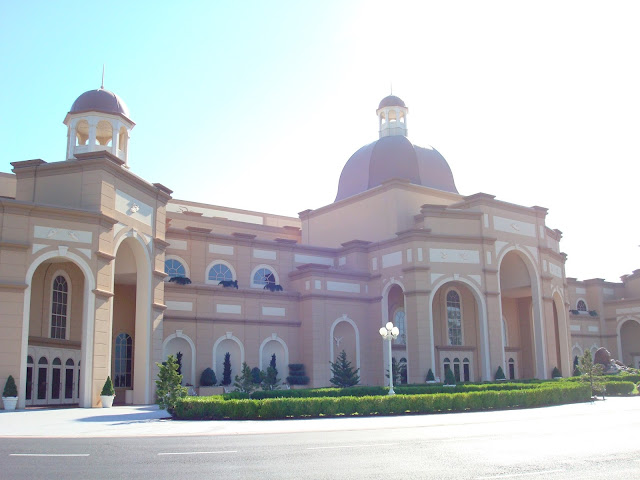 This is my daughter, son-in-law, me, and my son in front of a beautiful lion and lamb sculpture in front of the theater. 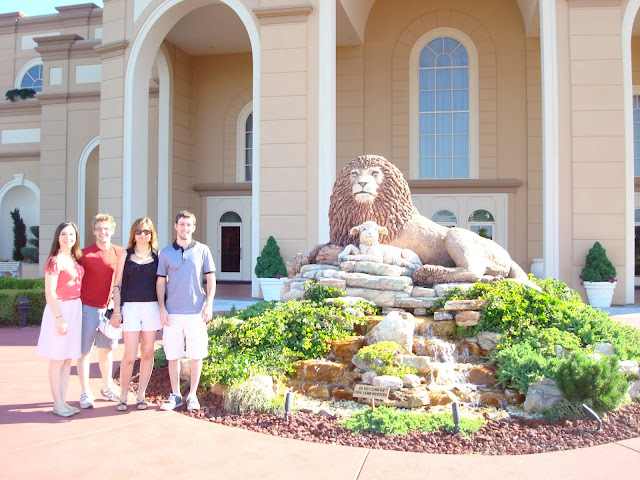 Now, for my opinions of the show.  Technically, it was the BEST live theatre show I've ever seen....and I'm a big theatre fan, I minored in Theatre Arts in college, I've seen Broadway Shows in New York, I see all the big traveling shows in all the major cities in America.  BUT, ( yes here's the BUT), I thought the musical score, vocals, and dance was very weak.  However, I don't think the average person would notice what my family and I noticed.  My daughter has her Master's Degree in Vocal Performance and is currently performing in New Hampshire for the summer.  I've been exposed to so much incredible singing through her life voyage of singing, that I have a very keen ear for what a well trained singer should sound like, and I easily recognize issues.  Then, my son-in-law has a lot of dance training,  so he helps me recognize what a good dancer and choreography should be, and my own son is a senior studying percussion, and is a real 'musician' who saw a lot of flaws in the musical score.  One thing he said to me was that there was no 'rememberable song'.  You don't leave the show humming a tune, or feeling so moved by a piece of music.  Yet, despite all this, the show was great Christian entertainment.  It was family friendly, biblically sound, and, as I already stated, technically superior to anything I've ever seen before.  The set, animals, special effects, lighting, etc., was just jaw dropping and worth every penny of the $50.00 per person admission ticket.

After the show, we visited downtown Branson.  I wish I took pictures of their main drag, but we drove so quickly through it, and there really was no way to stop the car and walk, that I didn't get any pics.  The best way to describe it,  is that it's very kitshy, humorous, somewhat tacky, and a little bit vintage.  You'll be driving down the street and the first thing you notice is a giant Titanic vessel, and then a few blocks down is a old, theater building that looks like it was built in the 50's and falling apart , then a silly sign advertising some goofy hillbilly show.  It's really quite odd, yet, slightly appealing and interesting.  Because we had already spent $245.00 to see Joseph, we didn't attend any other shows, so I can't tell you what other entertainment options Branson had to offer.  I know they had a train that drove through the Ozarks for about $28.00 per person.  They also had a boat that you could ride and/or see a show on board.  Below is a picture of the train. 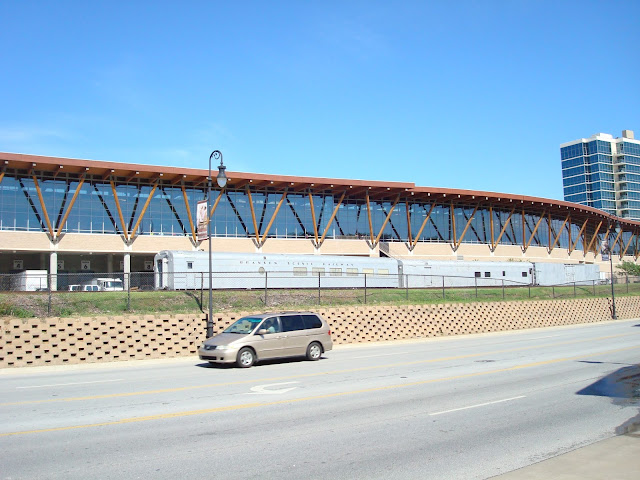 Downtown Branson was actually quite nice after our bad experience in Downtown Springfield.  They actually had real, operating stores.  One of our favorite stores was Dick's 5 and 10.  That's a picture of my son standing in front of it below.  They had everything in the store you could imagine, and a lot of vintage toys and candies.  It really brought back a lot of memories....but it was way too crowded for my comfort, so we didn't stay long. 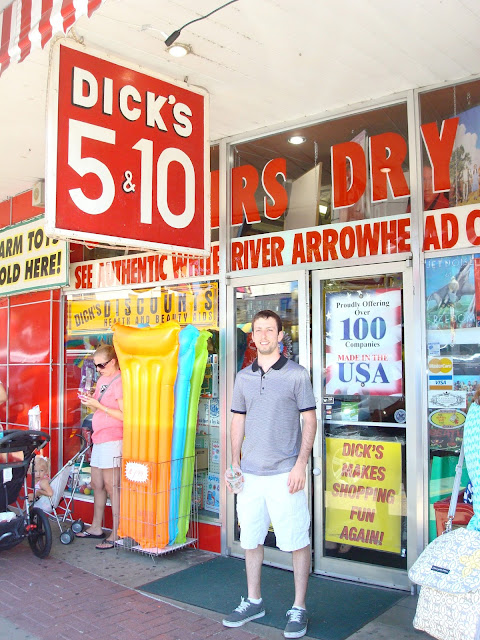 This was a shop that sold beads.  I didn't go inside.  I just like the way the building looked.  The second picture shows an ice cream shop. 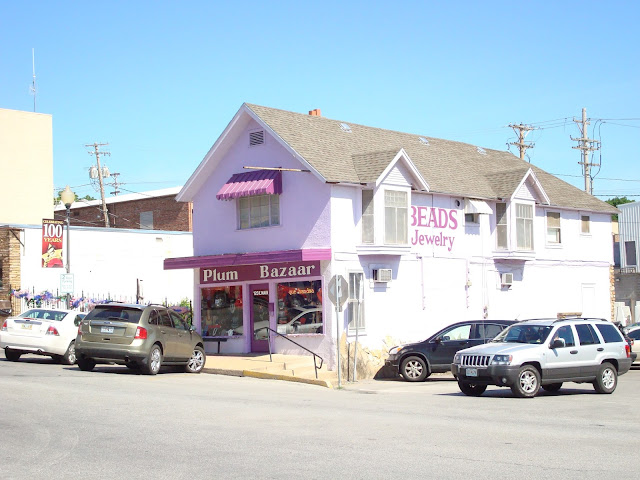 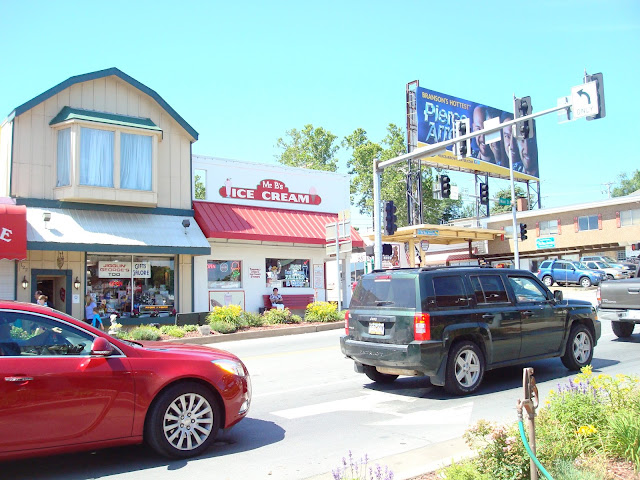 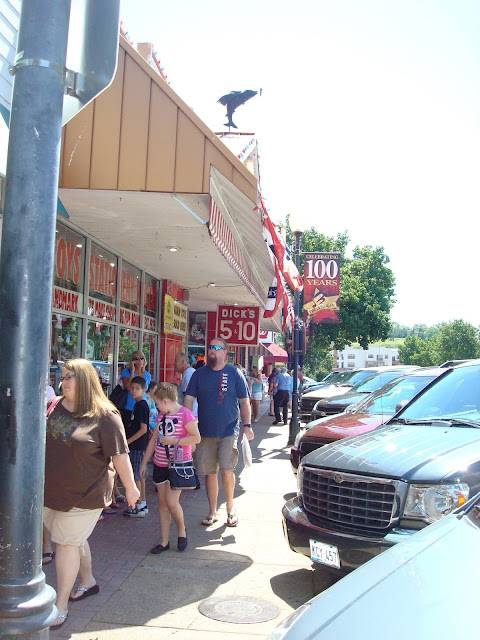 This was a WONDERFUL Chocolate Shop.  We love to visit Chocolate Shops whenever we travel, and we really enjoyed this one.  The owner was so nice, and we found out that he is originally from California, just like our son in law.  And the chocolate was delicious!  It's  made right on site, so it was very fresh and had that homemade taste. 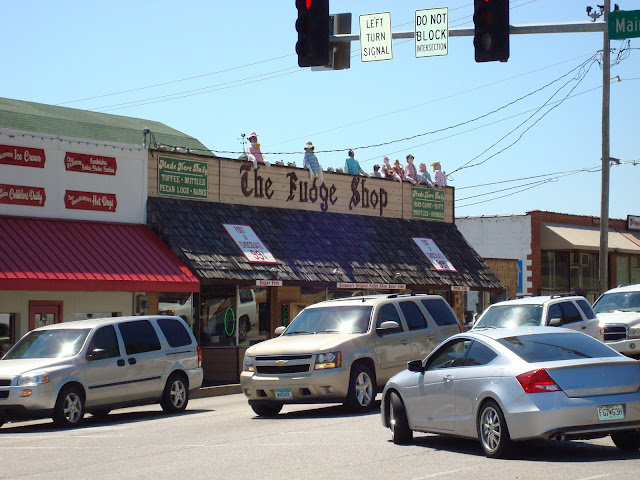 This is the inside of a vintage Ice Cream Shop.  That's my son in the foreground, with my husband in the background.  My son had headphones on the entire trip, but then, he has had headphones on his entire life.  He lives and breathes music.  He actually suffered a little bit of depression on the trip because he had to go a whole week without being able to play music...until we got to Eureka Springs....but that story is for another post. 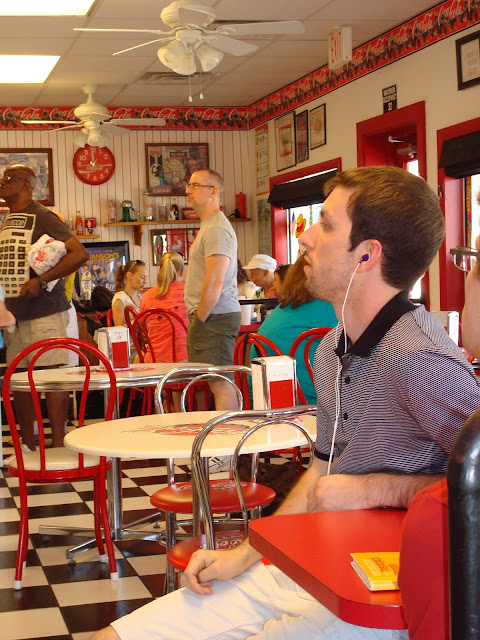 Here's another picture of Dick's 5 and 10.  Can you tell I liked the place? 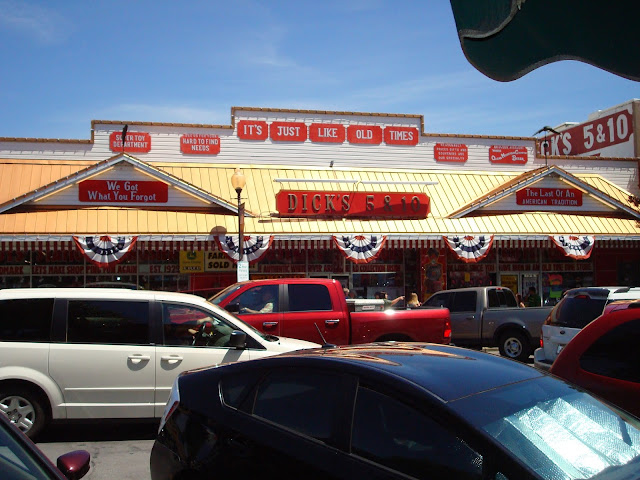 One thing we really liked about Branson that no other city in the area had to offer was their FREE trolley rides.  It was so nice to jump on the trolley and sit for a spell instead of having to walk everywhere.  I think I might have annoyed the people in front of me though, because my husband who was sitting in the row in front of me to the right in the picture, had all the chocolate and wouldn't stop eating it.  I kept screaming 'Don't eat the Dark Chocolate, Don't eat the Dark Chocolate'.  Finally one of the ladies in front of me turned around and asked 'And where did you get this delicious chocolate from?'.  My daughter was so embarrassed. 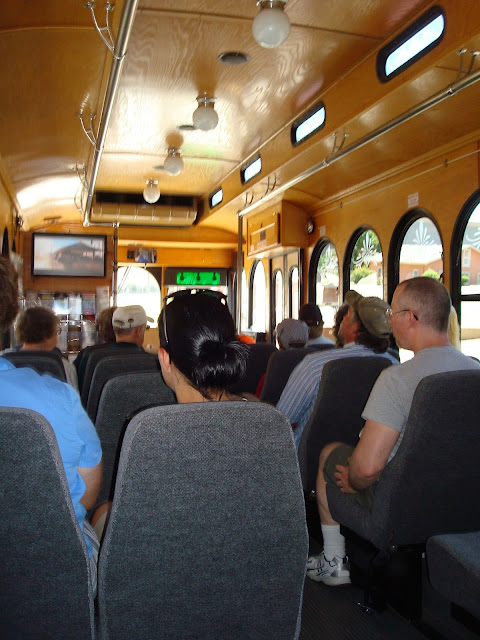 After walking around downtown, or taking the trolley, we found this shopping area.  It had all modern stores that you'd see in any mall, but it was an outdoor mall with a beautiful water/fire show.  Here is a picture of the show. 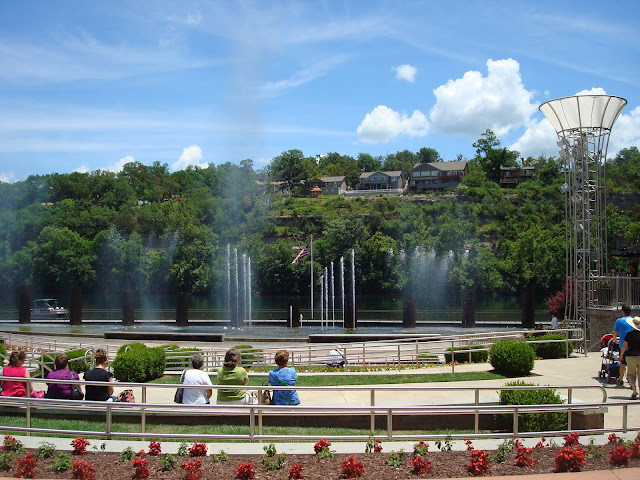 Before heading back to the hotel for the day, we stopped and had a picnic lunch near this beautiful lake.  It was so serene, and one of the best picnic spots I've ever had.  Can you see the boat in the distance?  That's the showboat that I told you about earlier. 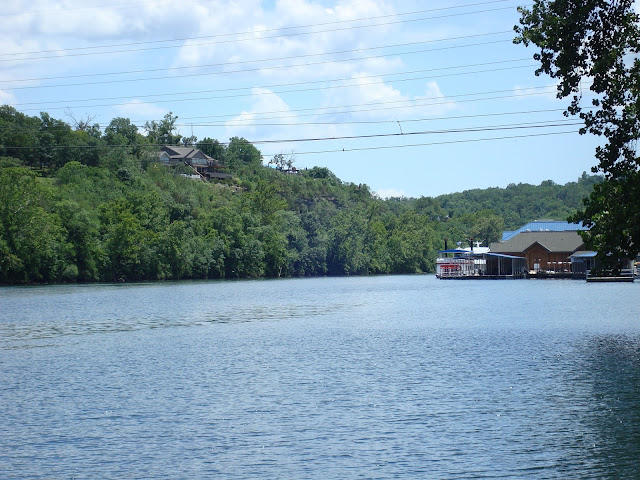 And finally, my family and I had a good chuckle at this business's sign.  we don't see this too often in our Democratic State.  I admired that the owner felt free to speak his mind about politics without worry about retaliation. 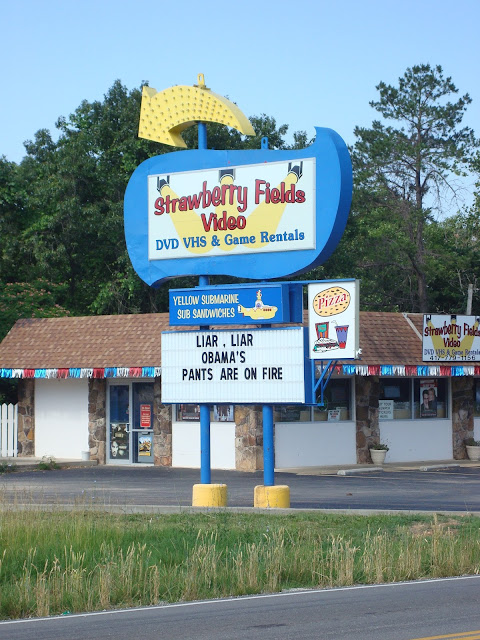