Hello!  I needed an Anniversary Card this week, and I wanted it to be really quick and simple because I didn't want to spend much time in my craft room.  This card originally was just going to have designer paper and the key and locket, but as I was assembling it, it grew into this: 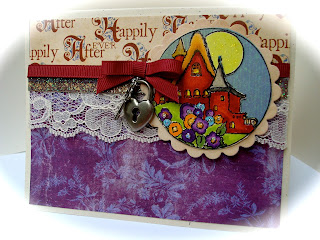 As I was putting the card together, I started thinking 'It needs a big heart, or something on the right, not just designer paper.'  Then I saw this new Crafty Secret's Stamp sitting on my desk that I hadn't used yet, and I thought 'the house fits the 'Happily Ever After' theme of the designer paper!'  So then I  stamped and colored, but I felt that the image should be a little more romantic.  That resulted in me stamping the image for the second time onto blue designer paper to create a night-time sky.  I then cut the colored image out, and glued it to the blue sky circle.  But now, I wanted a full moon.  Out comes the stamp again, to stamp the image for the third and final time, color the moon a mellow yellow, then cut it out and glue it to the circular panel.  Whew!  What started out as CAS is now vintage and romantic!  Funny, how you can start with one idea for a card/project and completely drift in an entirely new direction.

Ribbon and Stickles were added on the flowers and moon for further embellishment.  The stamp is called 'Home Sweet Home' and the paper is DCWV 'Once Upon a Time'