Hello!  As most of you already know, I play the Christmas Card Challenge on Splitcoaststampers where we make Christmas Cards all year long so that were not stressed out at Christmas trying to get our cards done on time.  I make about four cards a month so that I'll have about 50 cards at the end of the year.  I already made one card which I posted HERE,  and these are the final three for the month of April.

For my second card, I used the MFT image 'Thanks Snow Much'.  I put glitter and Flower Soft on the Snowman.  I used both pre-purchased felt snowflakes and acrylic snowflakes for embellishment.  The paper is DCWV 'The Winter Matstack'. 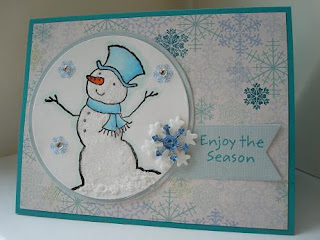 For my third and final card, I used Crafty Secrets 'Snow Globes' stamp set which is the same set I used last month which you can see HERE.  This set comes with so many images, that I was able to use four of the main images last month and I still had two main images left to use this month.  Plus there's lots of 'little images' I haven't even used yet.  And, these image can be used either as Snow Globes (which is how I used them last month) or as Ornaments.  The set comes with two separate bases to use if you want to make globes, or an ornament top if you want use them as ornaments.  Since I made Snow Globes last month, I decided to make ornaments this month.

This card used the Splitcoaststampers Sketch 426.  The image is stamped twice and embossed with black embossing powder and popped up on dimensionals. 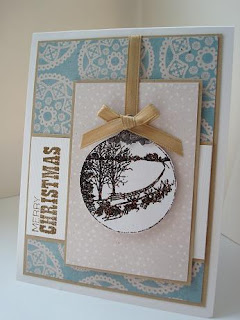 This final card also uses a Splitcoaststampers Sketch (SC394), is stamped twice, and popped up on dimensionals.  I also embossed the sentiment with Black Embossing Powder and used a gold glitter pen  to color the ornament holder.  The tree is brad, and the paper is from an old DCWV Christmas Stack. 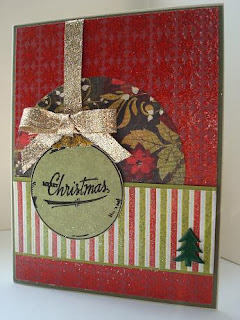