Day One in Italy!

Our first day in Italy was already half over by the time we arrived in Florence, so we didn't do much. We just went to our friends Anny's apartment to freshen up and get a bite to eat and talk a bit. Anny's apartment is lovely, but very small. I was already aware of the tight quarters Europeans live in compared to Americans, but it took some time getting use to when I live in a 3000 square foot home with plenty of bathrooms. The outside of Anny's apartment building is ancient, like all the buildings in Florence, but inside it was quite modernized. I will not be posting pictures of her apartment because I didn't get her permission to do so. The apartment had two bedrooms (none of which had closets so they had open storage shelves everywhere), a small kitchen, a tiny bathroom, and a living area. There was a boudai in the bathroom (I know I'm not spelling it right, but I've done spell check, and checked the dictionary, and can't find the correct spelling anywhere. Does anyone know the correct spelling?) I never used it, but my friend Pam tried it and said it was quite the experience! Except one time, she let the water get a little too hot. It was quite funny. The bathroom shower was so small I could not even lift my arms to wash my hair. My arms are very long, and my elbows kept hitting the shower walls. Shaving, was next to impossible. I decided to go hairy for a week. It was a good thing I didn't bring any skirts or tank tops with me. LOL! The kitchen only had room for a dorm size refrigerator, which I was told is actually the norm in Italy for even the largest families. The floors were all covered in tile, and the walls were some type of stone or plaster that was very cold to the touch. All the windows were extremely tall and narrow, and had shutters that closed from the outside. Anny's apartment also had a small balcony where she would hang her clothes to dry (no one has dryers in Italy, and you wouldn't believe how small her washing machine was! I swear all you could fit in it was a pair of jeans and a sweater!) and grow herbs to cook with.

Anny made us our first Italian meal for lunch: A delicious pasta dish with broccoli, pine nuts, and herbs. It was wonderful! After we ate, we decided to take a walk around Anny's neighborhood. I was anxious to get some exercise after sitting in a plane for 24 hours! Below is a picture of a bridge we crossed. Below the bridge is a small stream of water where Pam and I saw our first, and hopefully our last, large sewer rats. Pam didn't even know what it was. It was so funny. She asked Francesco, Anny's boyfriend, "What type of animal that was down there. It is so big, and has such a strange long skinny tail". When Francesco replied with some degree of embarrassment "That's a sewer rat" I just about burst out laughing. 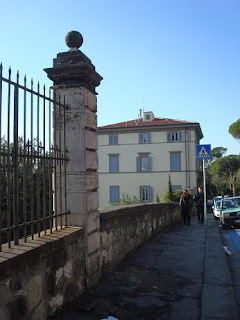 I was completely amazed at how every single building looked like a picture out of a magazine. Everything was so old, and so beautiful. And I loved the colors of all the buildings....they all blended together so harmoniously. 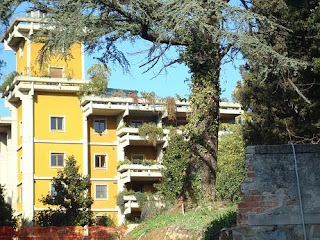 Here is a picture of the outside of a business. Every single house or apartment building in Italy has shutters. No one has shades like we do in America to block out the light. 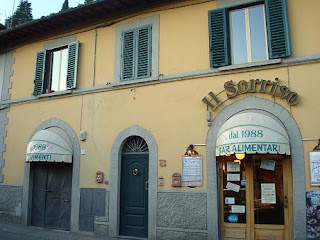 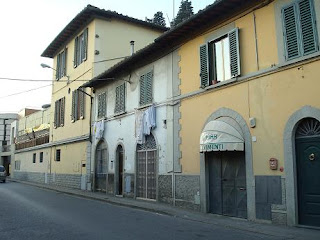 Hanging laundry is one thing you constantly see in Italy since no one owns a dryer. I just love the way it looks! So old-fashioned. 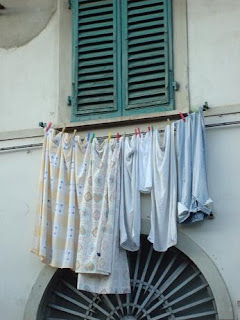 Here is another view of a narrow street. Can you believe two cars fit on this narrow road? Plus, pedestrians and motor scooters! Of course, all their cars have dents and scratches on them from trying to squeeze in tight spaces all the time. Anny says no one cares about the way their car looks in Italy like we do in America. Its just a mode of transportation, not an item to take pride in. In fact, when an Italian does get a new car, they often give it a good kick themselves first, so they are the ones to put a new dent in, and not a stranger. Then they don't get so upset when it does actually happen. LOL! 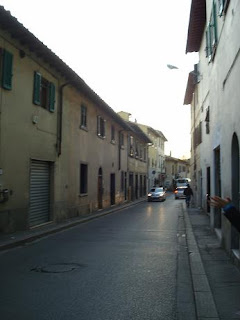 Motorcycles and scooters are a popular way for Italians to get around in Italy. Except they don't follow the same motorcycle rules we do in America. They never stay in a lane, rather they weave in and out of the cars, often squeezing in between two cars to pass. Anny said there are many traffic deaths in Italy because of it. 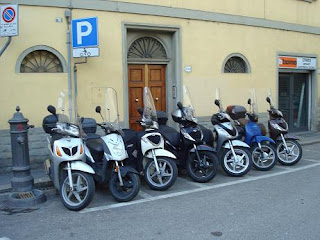 Here is a large balcony that someone is using for some extra storage space too. Bicycles are also very popular in Italy as a mode of transportation, except their bikes aren't very nice looking. They are often rusted, dented and very old. People don't buy brand new bikes because they just get stolen anyway. Anny said she had two bikes stolen from her since living in Florence. 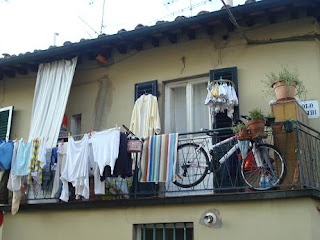 After our little walk we went home and had a delicious dinner of some type of orange lentil soup and a very hard, thick bread. Then Pam and I went to bed to get some much needed rest, while Anny and Francesco went off to Yoga class.
And that my friends, was our first day in Italy....uneventful, but fascinating at the same time.
Have a great day! Amy