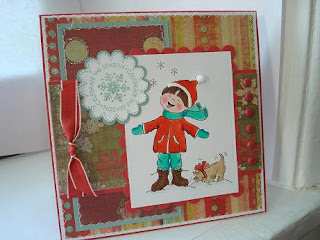 Happy Memorial Day everyone! Its a beautiful spring day here in Wisconsin. I hope to make a quick post, hopefully get to make one card and spend a little time in my garden, and then I'm off to a Barbecue!

For today's post, I'm featuring two cards I made for two separate Featured Stamper Challenges on Splitcoaststampers (SCS). I chose to case Christmas Cards, because as most of you already know, I am in the Christmas Card Challenge Group on SCS. In this group we make several cards a month all year long so we don't have to make 100 Christmas Cards in December!

My first card is for FS119 Joan Ervin. Her original card can be seen here: http://www.splitcoaststampers.com/gallery/photo/1168200. I changed everything but the layout/concept. The designer paper is very glittery and is from 'My Minds Eye'. Card stock colors are white, Sage Shadow, and Ruby Red. The sentiment is retired Stampin Up! 'So Many Scallops'. The main image is a digital image from 'Fred, she said' and is colored with Copic Markers. I put stickles on the snowflakes, liquid applique on the rim of the hat, and I added a 'puff' to the tip of his hat. 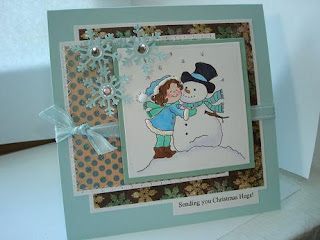 My second card is for this week's Featured Stamper mkstampin74. Her original card can be seen here: http://www.splitcoaststampers.com/gallery/photo/1167186 Again, I changed everything but the layout/concept. My designer paper is from My Mind's Eye. The card stock colors are White, Soft Sky, and Sage Shadow. The main image is also a digital image from 'Fred, She Said' and is colored with Copic Markers and mounted up on dimensionals. The snowflakes are a Martha Stewart Punch with a crystal brad adhesive attached to the center. They are also mounted up on dimensionals. I used liquid applique on the girls coat and hat, and added a 'puff' to the end of the hat. Stickles were added to the snowflakes in the image, and the designer paper is also very glittery. I used my sewing machine on both cards too!