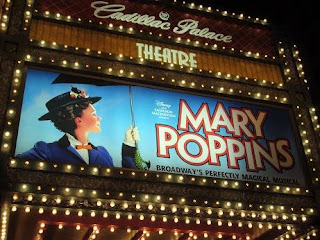 Good Morning to you all! I know we were all warned to stay off our computers today, but since I've been AWAY from my computer for several days already, I couldn't resist. Plus I thought, 'Really, if they couldn't have fixed the problem today, will it really be fixed by tomorrow? AND are all the businesses and banks not going to use their computers today either? I think not. So here I am. If you don't hear from me for weeks or months, you'll know my computer crashed because I didn't heed the warnings. LOL!

Well today's post will have nothing to do with paper crafting, but because my blog is dedicated to many other artistic pursuits, I am posting pictures of my trip to Chicago. My trip was certainly the adventure, to say the least. Saturday my son was performing in our local District Solo and Ensemble Competition, so I couldn't leave for my trip till 4:00 p.m. (He did great by the way. He is going on to State in every single category he competed in). I knew there was snow predicted in the Milwaukee/Chicago area, but I'm pretty good at driving in bad weather, so I thought I'd be o.k. I was headed to Milwaukee to spend the night with friends (about 4 hours from where I live), the sun was shining and it was a gorgeous day where I live. Then about two hours into my drive I noticed the sky was getting darker and darker ahead and a 'mist' was in the air reducing visibility. I kept driving, hoping to 'beat the storm', but eventually I had to pee, so I thought, I'll stop and get some gas. By then the 'mist' was turning into real snow, and visibility was almost non-existent. As I pulled into the gas station, my car slid. Then, as I tried to put gas in the car, I felt I was in a major blizzard! The wind was ferocious and the snow was blinding. I could barely even put my credit card in the slot because it was so jammed pack with snow. I ran into the local restaurant next door and asked the teen behind the counter if she heard a weather report. Of course she didn't. Teens never pay attention to the weather. LOL! I then ordered my dinner to go and headed back to my car. I saw a couple of nice hotels and debated whether to stop here rather than going any further, and thought, 'No. I think I can make it. Its not too bad yet'. So I pulled back onto the road and just started to get back onto the highway when my car spun completely around and in the opposite direction. Then I thought. 'You know, that hotel doesn't look too bad after all.'. So I went UP the on ramp (I was pointed in that direction anyway, so why not? LOL! And thankfully the other cars let me through.) and turned left heading to the hotel. About half way down the road, I realized I was driving on the wrong side of the street. I couldn't see anything because of the 'blizzard'. So I did a U-turn and went around the median and this time I was on the RIGHT side of the street. As I pulled into the hotel parking lot my car again slid all over the place. By now, I was so frustrated and shaken that when the clerk behind the counter charged me $100 for a single room, I didn't even care. Anything to get out that weather! I then proceeded to call my friends in Milwaukee to tell them I wasn't coming, then I called my husband and daughter to tell them of my change in plans. Because the storm was predicted to go through the morning, I left a little later in the morning hoping to bypass it. It was still a slushy, grey mess as I drove to Chicago, but it was nothing like the night before. Welcome to Spring in the Midwest! And guess what? It snowing again today! My friend Darlene asked me when I was going to change the header on my blog since its Spring. Well Sorry Darlene, but that header will still have to stay awhile longer. I still don't have any spring flowers to show you. 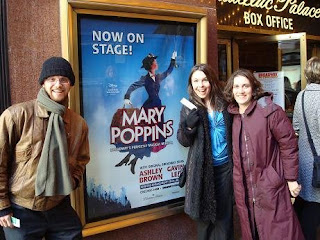 Enough about bad weather, onto news about my trip. I went to Chicago to see the Original Broadway Cast of "Mary Poppins' with my daughter and her friends. It was fabulous. The first picture shows the Marquee lit up at night. The second picture is of my daughter Ashley (holding the ticket), her roommate Susan, and her fiance Jason in front of the theatre. The picture below is of the theatre. The musical was wonderful. There were so many wonderful, surprising special effects. And if you love interesting set designs, this musical is fascinating to watch how they change scenes. They basically created this gigantic doll house that rotates and opens up to every room and level of the house. It was amazing! The best scene in the musical was the Chimney Sweep Scene where they tap dance on the roof tops! The audience went wild for that scene! They did a lot of great things with ropes and pulleys...flying Mary Poppins on and off the stage and using them on the chimney sweeps to portray 'climbing'. The little child actors were fantastic, and of course, so were all the leads and the entire cast. It was a wonderful feast for the eyes, ears, and soul. 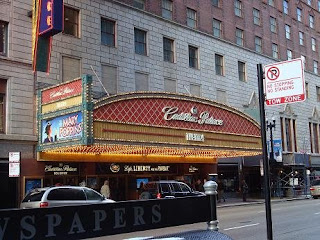 Besides seeing the musical, we walked around Chicago for several hours taking pictures of all the sights. Below is a great shot I got of some of the beautiful buildings in Chicago. 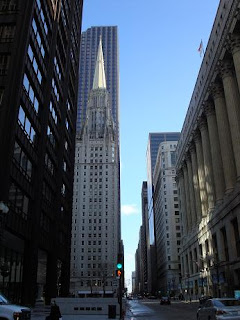 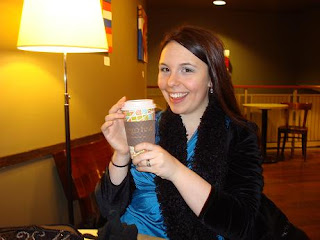 Because it was so cold and windy, we needed to warm up a bit, so we stopped for some delicious Chai Tea at a local shop. It felt so good to get out of the cold and sit and rest awhile. Our pants, feet, and socks were soaking wet from all the melting snow and 'slush puddles'. Here is my daughter posing with her tea. 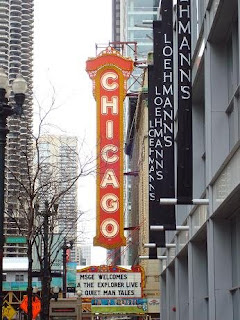 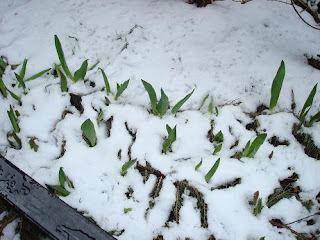 All the poor daffodils were blanketed in snow. I hope they survive! 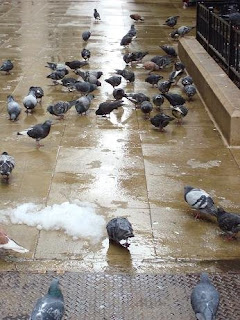 I didn't miss my own feathered pets at home, because I had plenty of company with all the pigeons in Chicago. It seemed everywhere I went I saw pigeons. One flock of these birds even flew so low they hit me in the head. It reminded me of Emery, my pet cockatiel, he does that to me all the time! LOL! 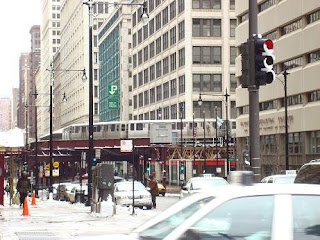 This is a picture of one of the above ground trains in Chicago. Chicago is one of the few cities to have them and are thus famous for them. 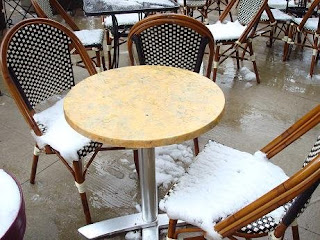 Anyone care to dine outside on the patio today? I think not! LOL! 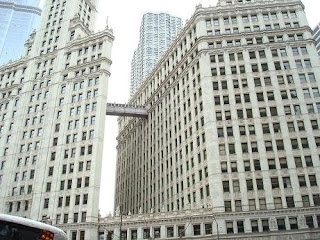 I would just love to walk inside that sky walk! Isn't that amazing! Can you imagine the view! And what a gorgeous piece of architecture too! 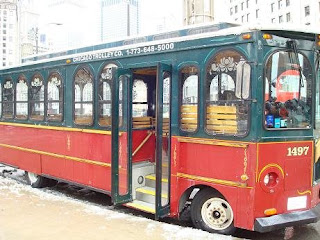 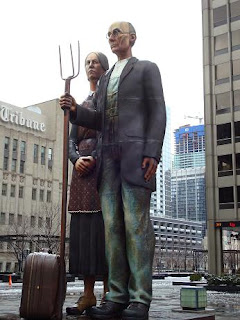 This huge and interesting statue is outside the Chicago Tribune Building. 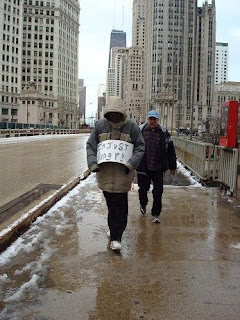 Here is a picture of one of the many, many, people 'begging' in Chicago. If I would have given money to every beggar I saw, I would have none left to come with! Every single block there were beggars. It was so sad. Ashley's friend Susan had fresh fruit in her purse, and every time she a beggar, she handed them a piece of fruit. But eventually, she ran out. 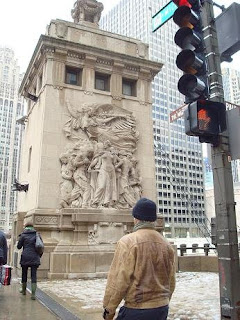 This relief is on the Michigan Avenue Bridge. 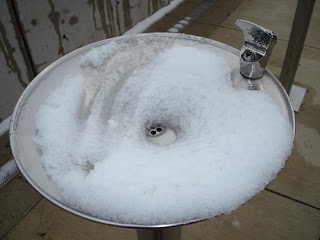 Any one need an icy cold drink? 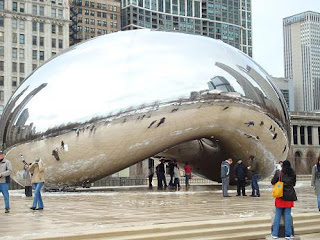 This is a sculpture of a bean. I have no idea why its there. They call it art. LOL! 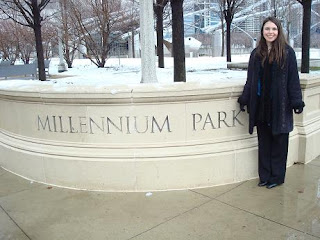 We went to Millennium Park to see the great lawn where President Obama gave his speech the night he was elected. The lawn seemed so small to me, it was hard for me to imagine that many people were there that night. 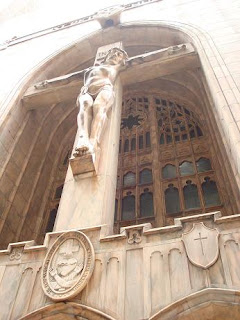 This beautiful crucifix is outside a Catholic Church. 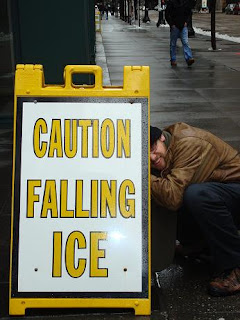 These signs were everywhere, warning people to be careful of all the ice falling off the skyscrapers. And they were quite true! We literally had to watch for our lives! That's Jason, Ashley's Fiance, being silly for the camera.
Well thank you for coming along with me on my little adventure. Thankfully the drive home was much less adventurous than the drive there. I will have something more paper-craft related to post tomorrow. Have a good day and pray that Spring will come soon to Wisconsin! Amy