Summer Highlights - Celebrating the 4th, Going to the Beach, and Playing on the Porch

For the next three weeks, I am going to just share a few summer highlights of some fun things we did this summer.  We took a travel vacation in the spring to the Smokey Mountains, and we plan on taking another vacation this fall, but for the summer we just enjoyed our own backyard.
Ashley, her husband Jason, and the grandkids came up to visit us for a week.  They arrived on the 4th of July, so after grilling out, we all headed out for the local parks to see the fireworks.  It was Atticus' first time at the fireworks and we were all a little nervous about his reaction, but he LOVED it!  He thought they were the greatest and he was not afraid of them at all. 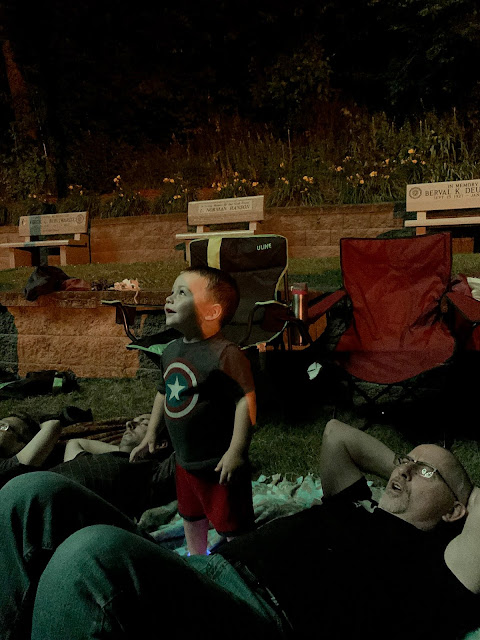 Ashley and I both purchased these glow sticks for the kids to play with while we were waiting for the fireworks to start.  What a godsend these are!  I wish they had them when my kids were little.  They are so much safer than sparklers (I burned my fingers badly as a child with sparklers) and they really help occupy time.  The kids were not bored at all playing with these glow sticks. 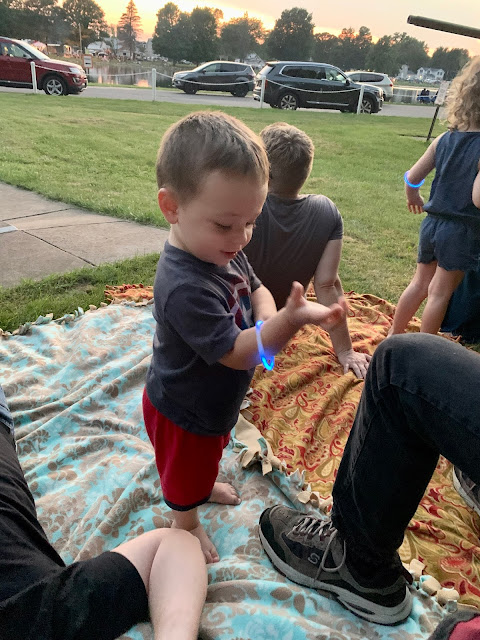 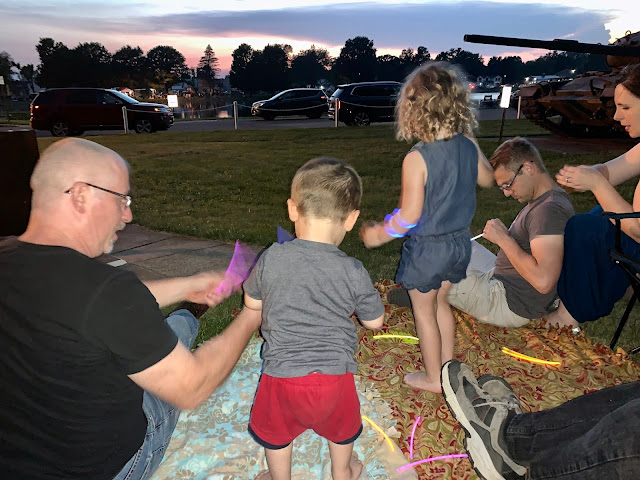 Ashley made a fun ball with some of the glow sticks.  It did not stay this way long. 😁 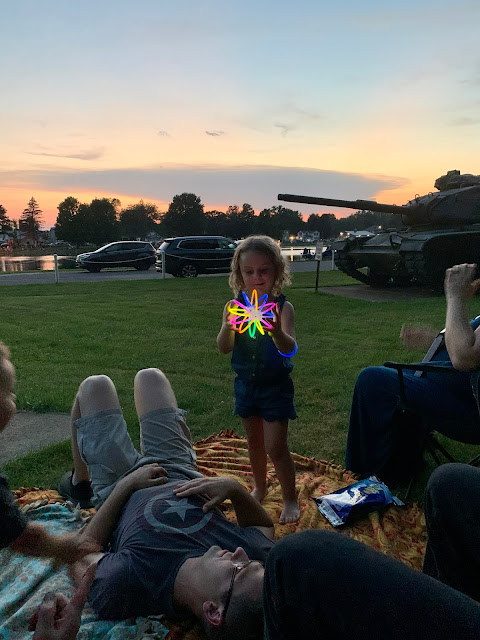 I know this picture is blurry, but it is so precious anyway.  Ah, that expression says it all! He loved the fireworks so much1 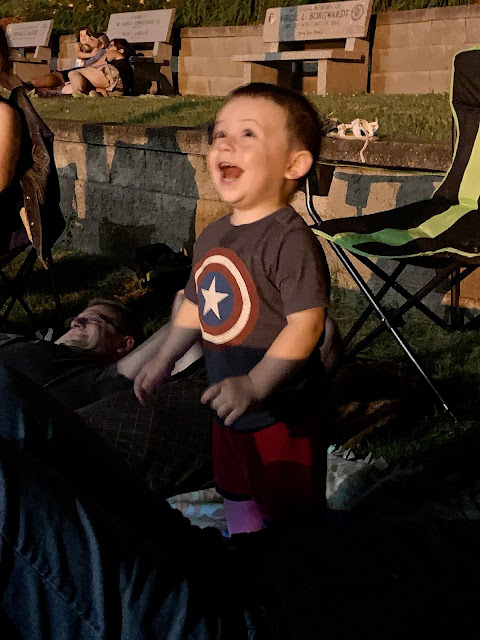 This was Alethea's third time to the fireworks, so she was a pro! 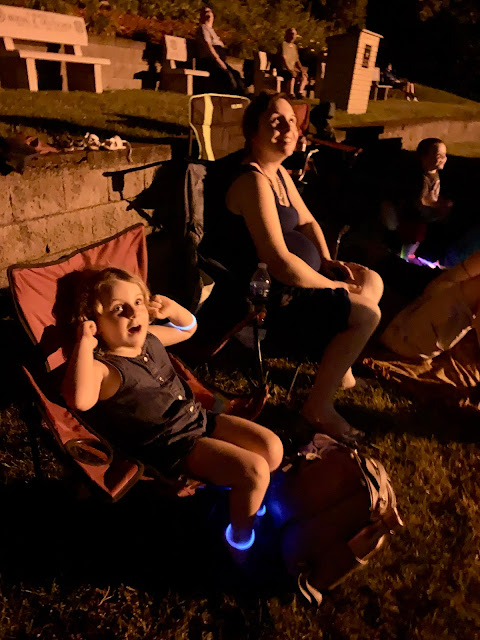 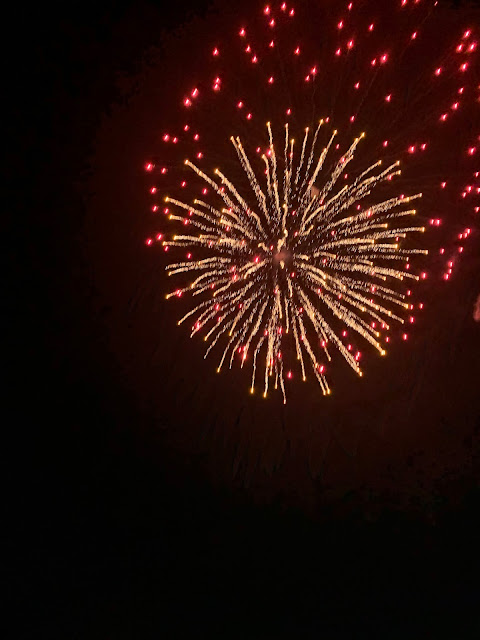 Another activity we did while the grandkids were here was go to the beach.  Alethea and Atticus have a lot of splash pads where they live, and they've also gone to public pools, but they don't get to beaches too often.  This is a very unique beach, because it is actually located on the Mississippi River. 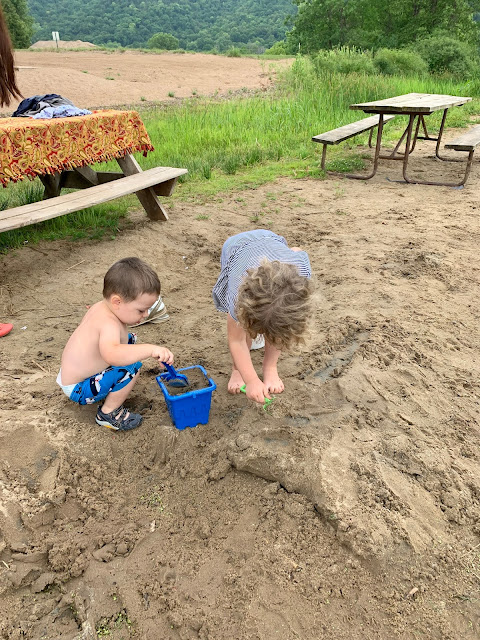 It isn't often one can go swimming and see a huge barge behind them. 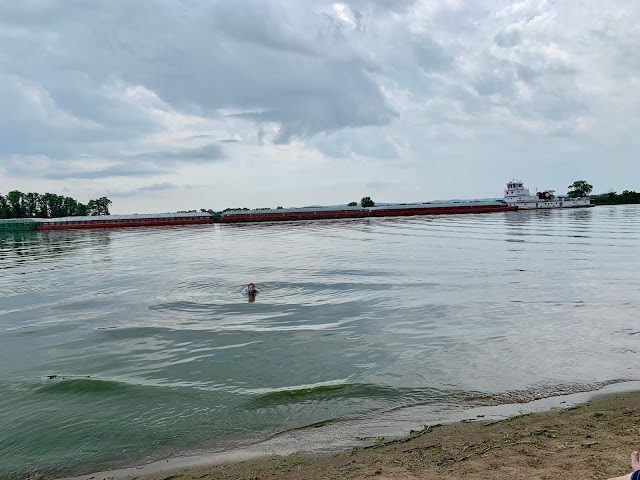 The kids were a little leery of getting in the water because I'm sure it looked pretty big and scary to them, but after a half hour of playing in the sand, they were ready!  And once they got their feet wet, it was hard to get them out of the water. 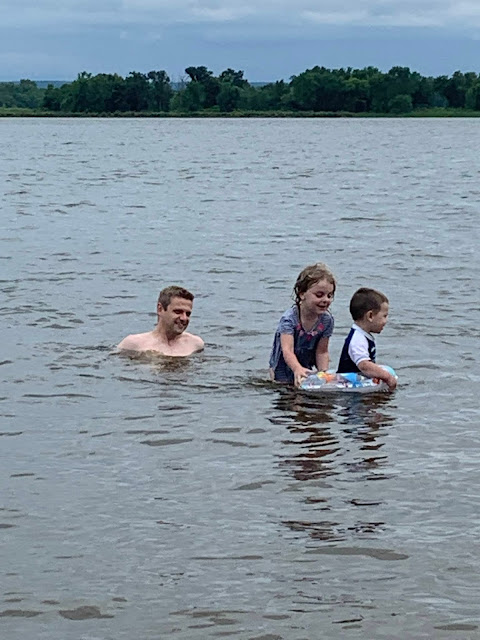 I have no idea why, but the water is super warm, like bath water!  I'm sure that's one reason the kids liked it so much.  It's also very shallow and sandy on the bottom for quite a ways out.  Once they got in the water, and felt the warmth and saw that it wasn't deep, they felt very safe. 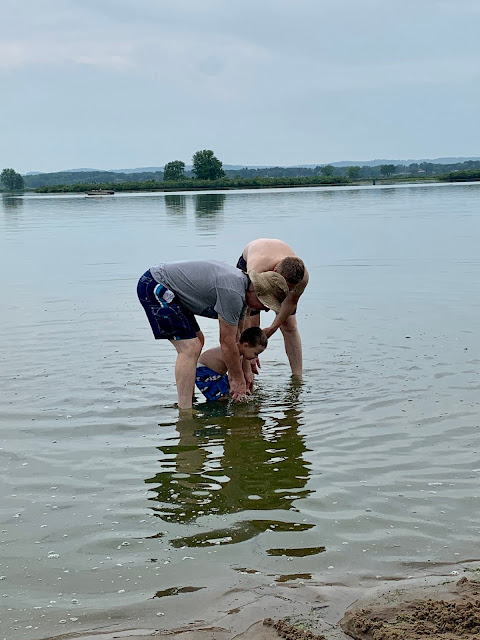 Grandpa Todd made sandcastles, but Ashley warned us that if Atticus saw them, he would knock them over. 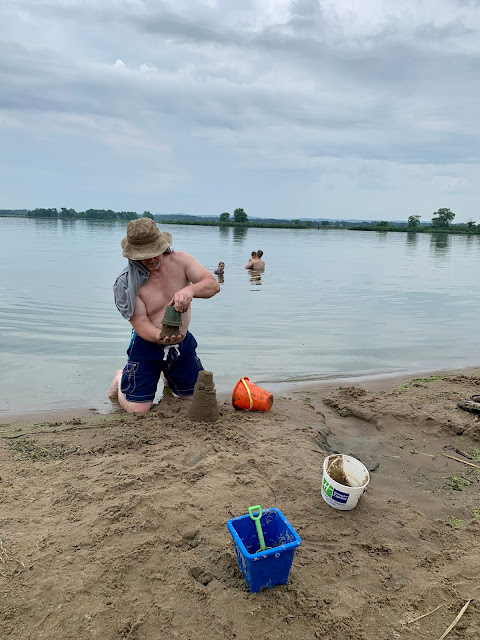 Yep, sure enough.  The little guy saw the sand castles, and came right over.  Just look at the mischievous little grin. 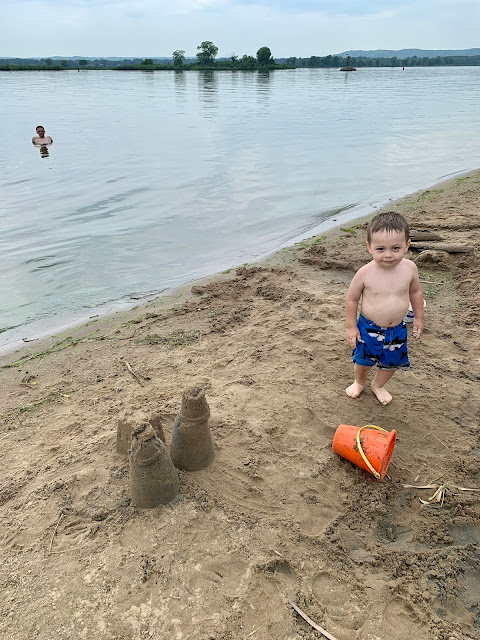 The kids enjoyed the beach so much we took them twice.  It's only about a 15 minute drive from our house, so it was very convenient.  The second time we went, it was cooler, so when Atticus came out of the water, he snuggled with mom to get warm. 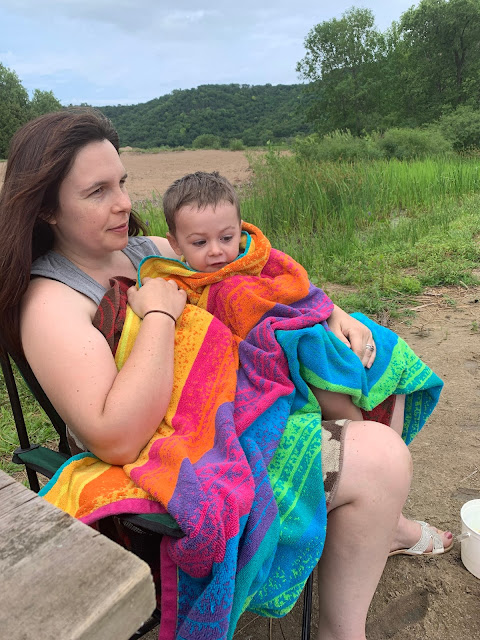 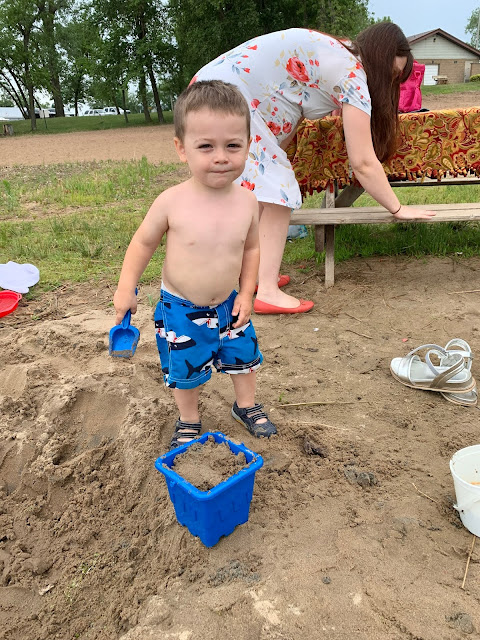 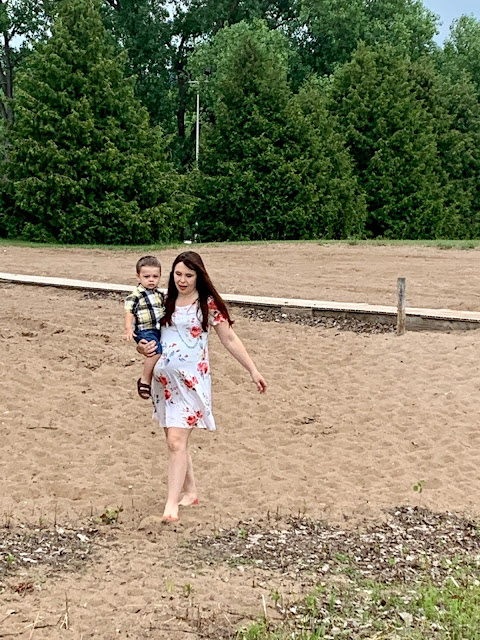 The grandkids also had fun making rivers and puddles in the sand. 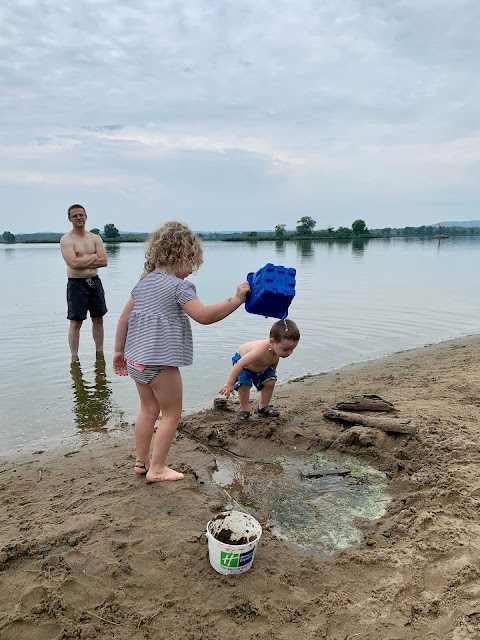 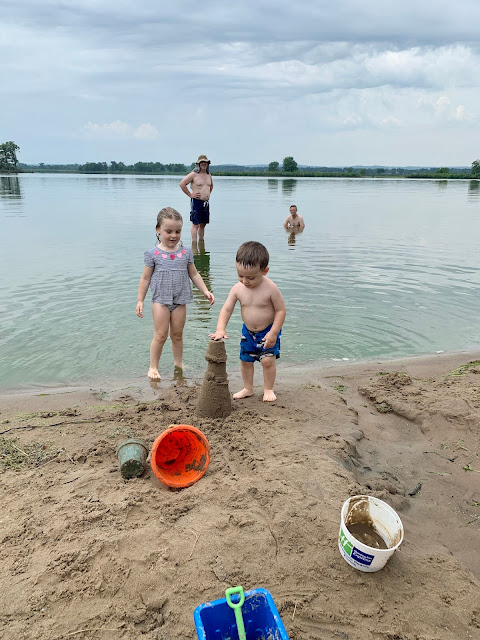 When the grandkids first arrived in town, we were having a heat wave.  Then after a couple of days of horribly hot weather, a cold wave moved in.  We literally went from one extreme to another!
During the heat wave, no one wanted to go anywhere as it was much more enjoyable staying home in the air conditioning.  But we did get out on the screened porch and enjoyed that!  I filled two galvanized tubs with water for the grand babies to play in. 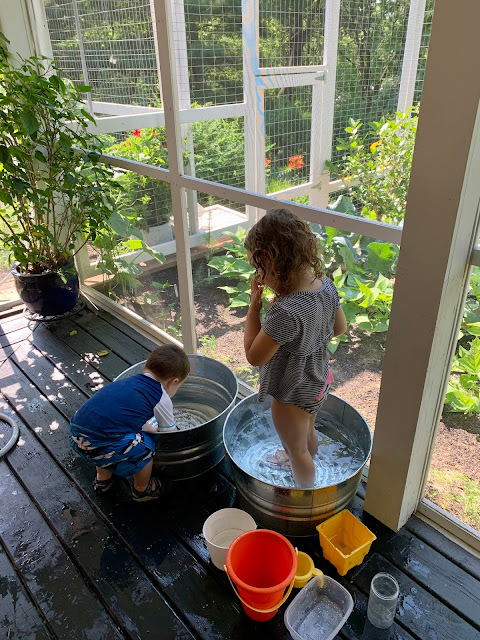 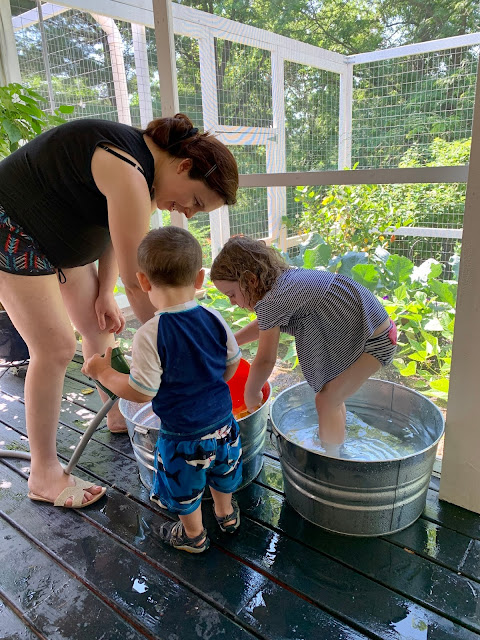 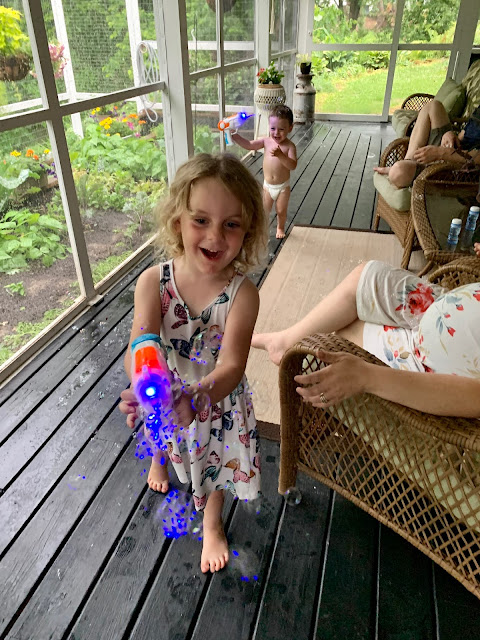 We used our screened porch so much the week the grandkids were here.  It was like a giant playpen...ha ha!  Our yard isn't the safest for toddlers, so this is a nice place to be outdoors with them safely. 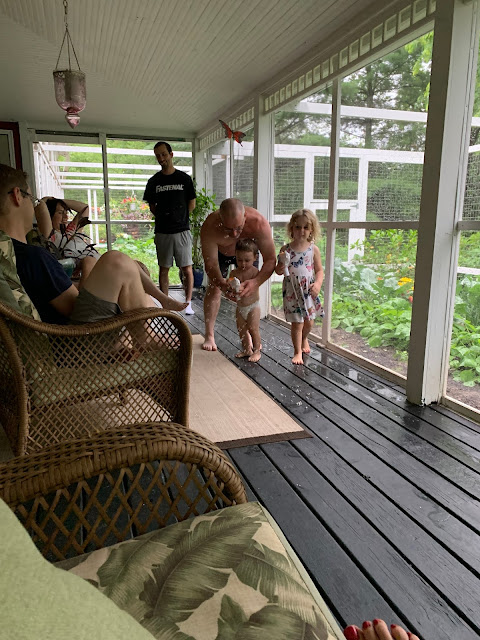 The grandkids got so much bubble soap on the deck it was getting very slippery. 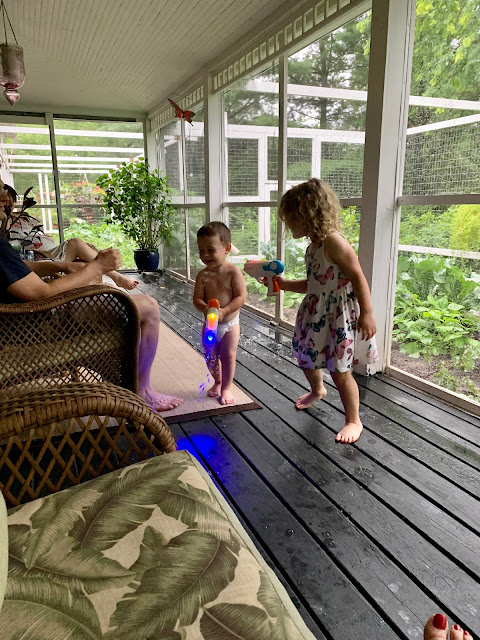 All they wanted to do was shoot bubbles at us adults!  I think I was soaked in Bubble Juice by the time the evening was over.  Oh well, if I had to choose between being shot at with a squirt gun or being shot at with bubbles,  I'll take bubbles anytime! 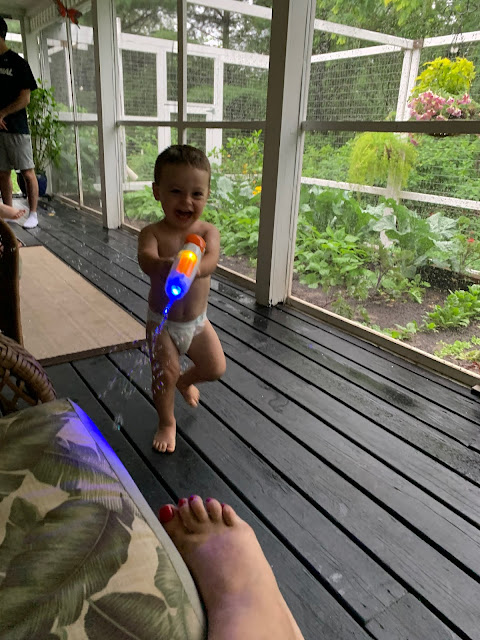 I hope you enjoyed this little snapshot of my family.  Next week I'll be back with a visit to Pepin, Wisconsin to see the birthplace of Laura Ingalls Wilder.
Have a Great Day!  Amy
Linking Up with these Fabulous Blogs HERE!
Posted by Amy Johnson at 12:00:00 AM