Day Three Of Our Wisconsin Staycation: Kayaking On The Kickapoo River!

Like everyone else in the world, Covid has affected our lives in many ways, one of them not being able to travel.  We normally take at least two major road trips across the country in a year and multiple smaller trips.  This year, we cancelled our major road trips and decided to stay closer to home.  We went on several day trips to go hiking, but we also did an overnight trip to Ontario Wisconsin so we could kayak on the Kickapoo River. 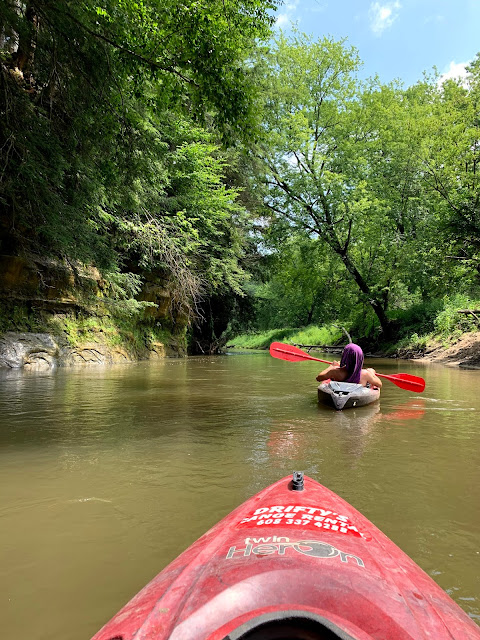 Ontario, Wisconsin is known as the "Canoe Capitol of the Kickapoo".  People come from all over to canoe, tube, or kayak this shallow, gentle river with gorgeous scenic views. 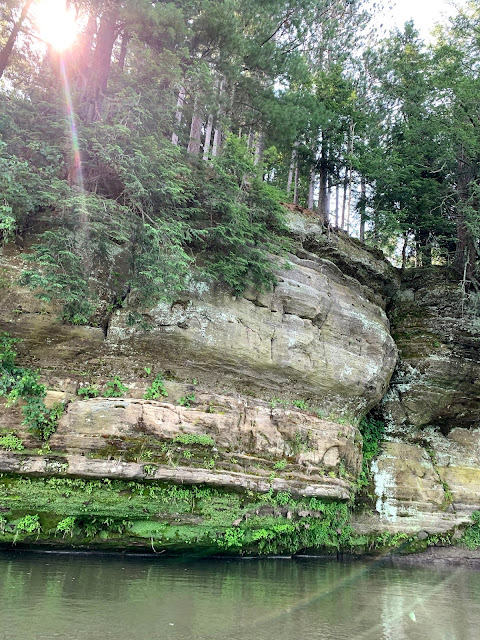 Now I can not swim, and I am terrified of water, so I was pretty nervous about getting in a kayak.  I've only been in a canoe once in my life, and never in a kayak.  So my husband rented us a tandem kayak and he did all the paddling and steering.  I just sat in front and enjoyed the ride. 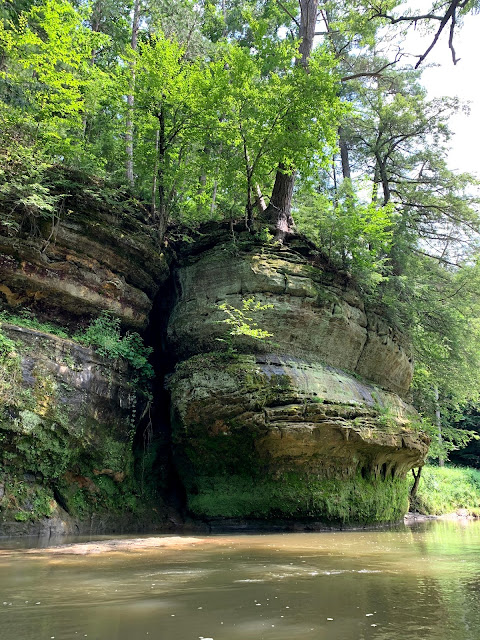 And quite a view it was!  The scenery is very diverse so you are never bored.  Sometimes you are in an open, sunny area surrounded by prairie land, then you paddle a little ways and you're seeing forests and amazing rock formations. 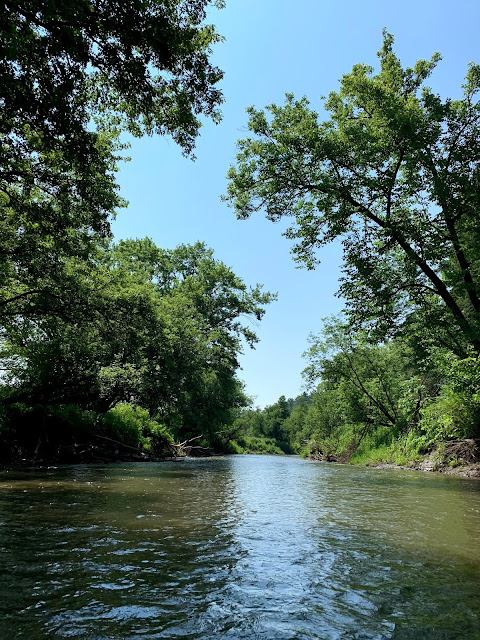 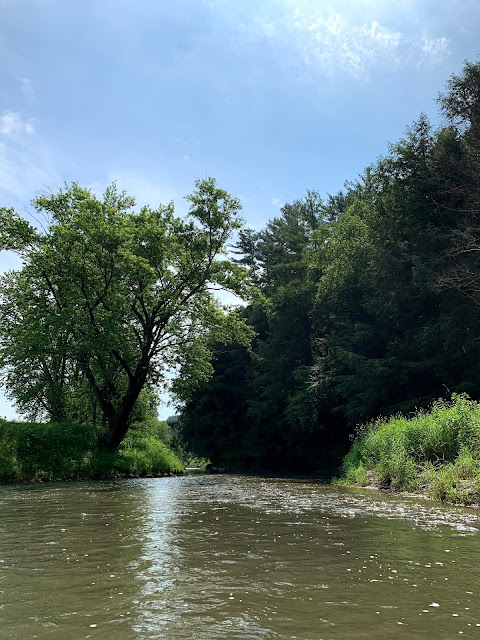 We rented our kayaks from Drifty's Canoe Rental, but there are multiple rental agencies available in the area.  You can choose how long you want to kayak ranging from  two and half hours to two days.  We chose the four hour trip, which was just the perfect amount of time for us beginners.  If you have your own canoes/kayaks, you can just pay to be picked up.
There are multiple bridges on the Kickapoo River and they are all labeled.  When you rent your kayak, they tell you what bridge to get off and then a bus or van picks you up and takes you back to your car. 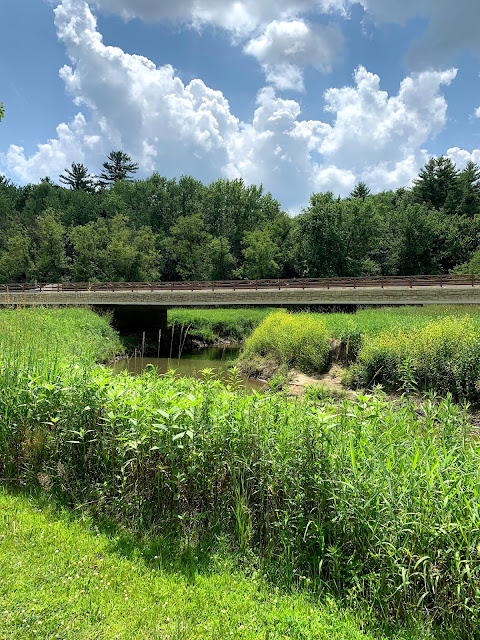 We first heard of kayaking on the Kickapoo River when we went on a fall hike to Wildcat Mountain four years ago.   It was on that hike that we saw all the kayakers in the river and thought how fun that would be.  My husband has wanted to go ever since, but it took Covid to make it all possible because we were always headed out of state for vacations before that. 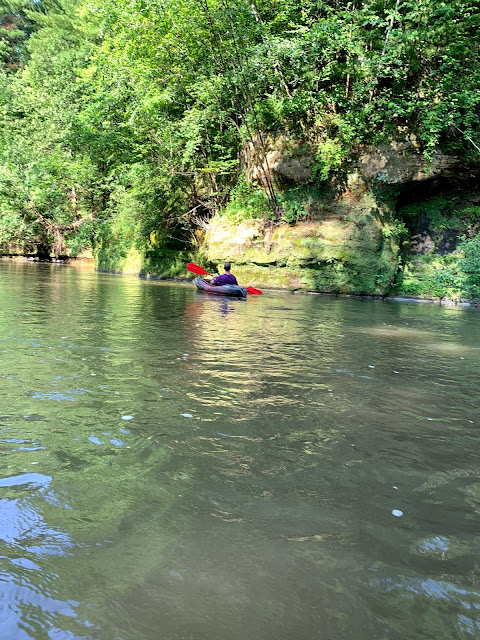 I just loved all the gorgeous, moss covered rock formations. 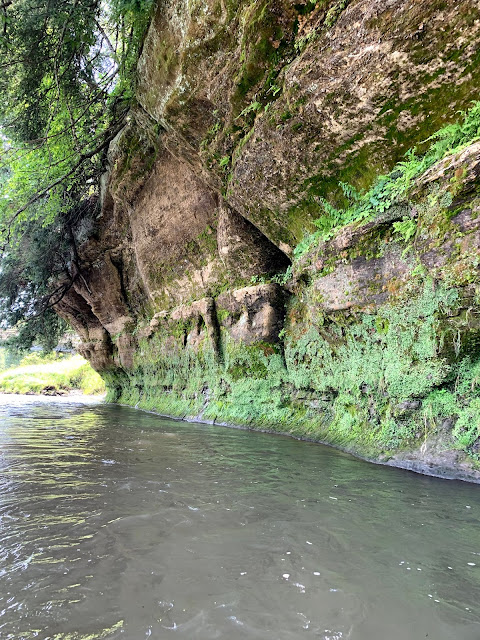 My son vacationed with us all week.  He really enjoyed this experience too.  He had his own kayak and like us, he never did it before either.  He managed pretty well and said "Either this is really easy, or I'm just naturally good at this!". 😂 Of course we were in the most shallow, gentle river possible.  There was only one small rapid part...that was my son's favorite.  He wished there were more of those.  I said "Well, we've never been kayaking before,  and I can't swim, so we wanted a safe river."  We did make a lot of mistakes.  If I ever go kayaking again, I'm gonna study up on it.  We almost tipped over once, but re-steadied ourselves.  And it was super hard to stop and land our canoe.  We almost missed our bridge stop! 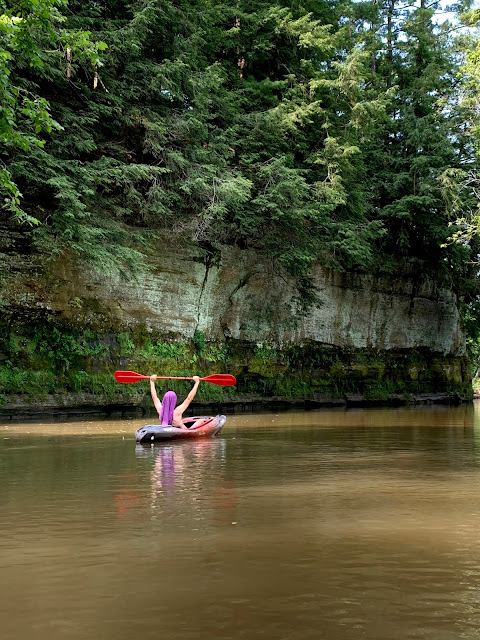 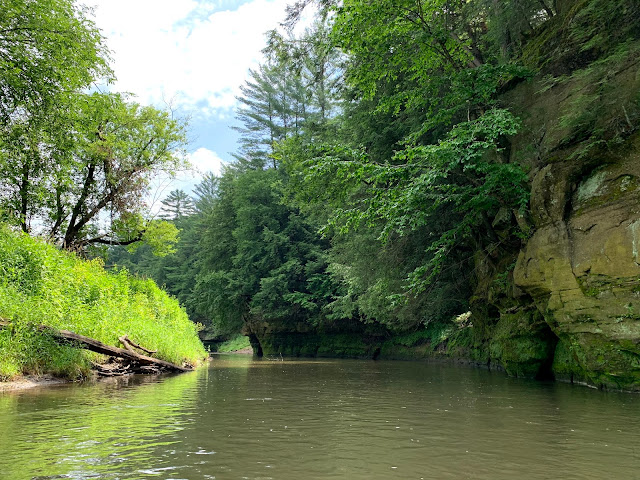 We had so much fun!  The only bad part of the day was that my son left his sun hat in the car.  He just shaved his head and was worried about burning it so he took his shirt off and put it on his head.  He ended up getting the worst sunburn of his life on his chest.  He put sunscreen on his back, and he thought he put enough on his chest/stomach, but apparently he did not.  I was really worried about him for days and didn't know if we should take him to the ER.  We just read on the Internet what caution signs to look out for (blisters, fever, etc.) and he never had any of those so we just self treated at home. 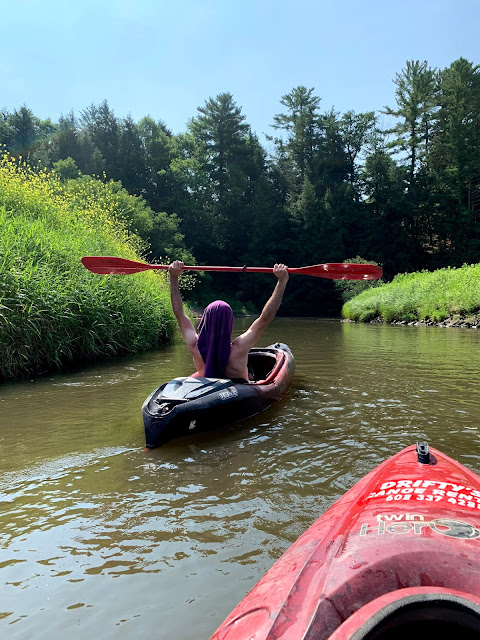 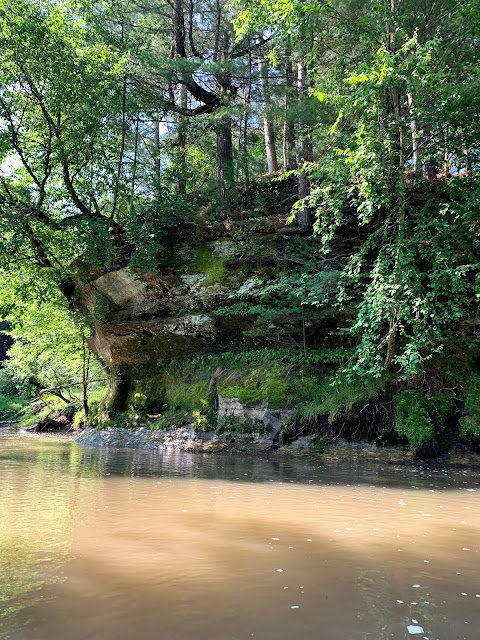 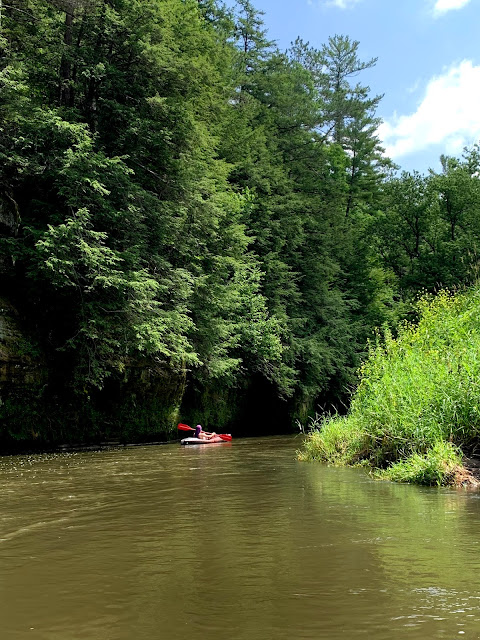 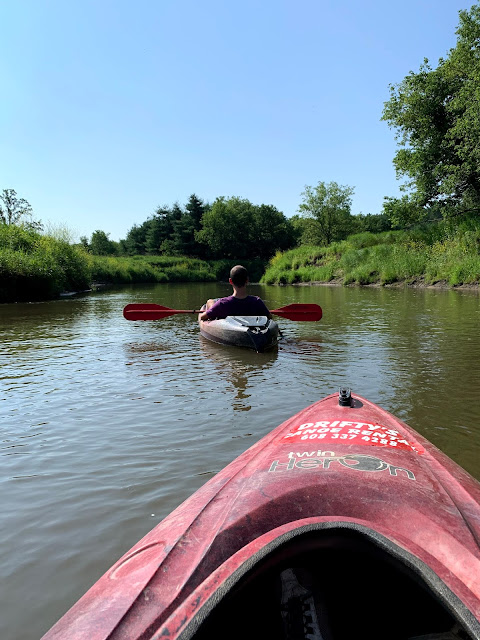 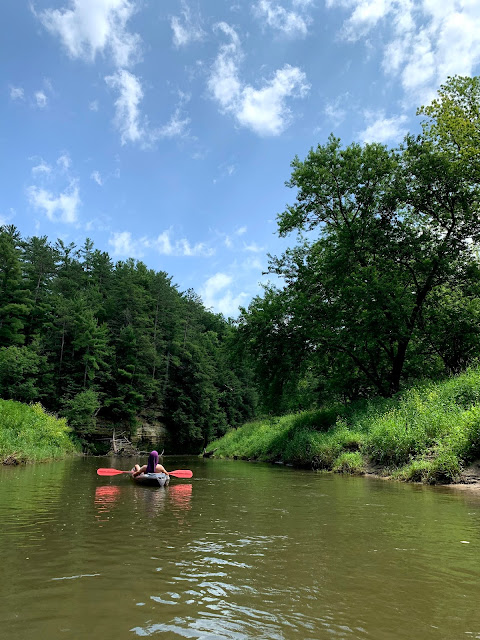 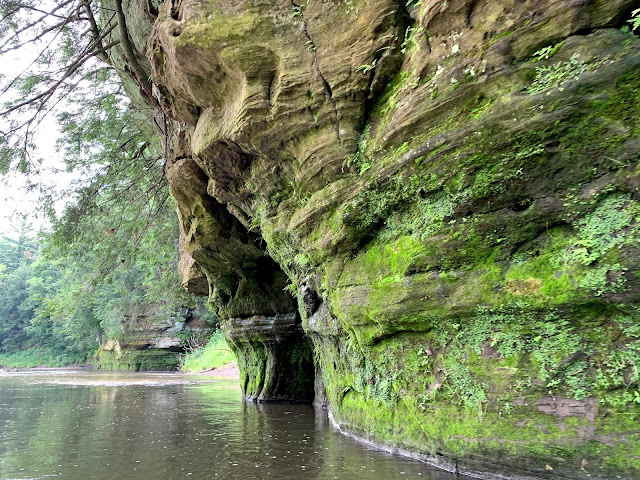 I just bought a new Phone and I was really worried about dropping it in the water.  I had a waterproof case that I purchased when we hiked The Narrows at Zion last year, so I kept my phone in that around my neck.  It worked out really well! 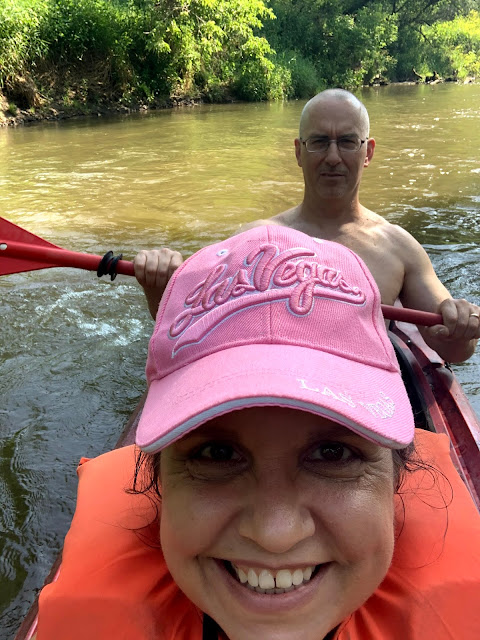 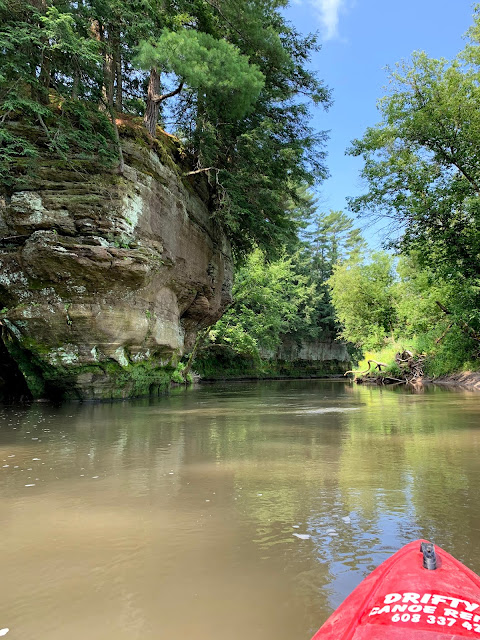 I thought it was so cool to be kayaking and end up in the back of someone's farm land.  So picturesque! 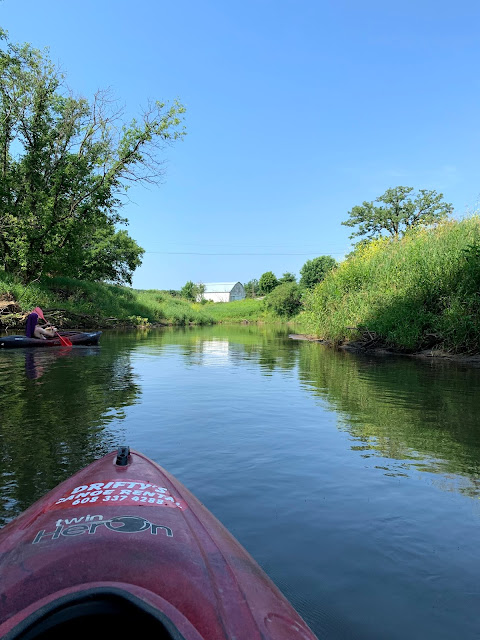 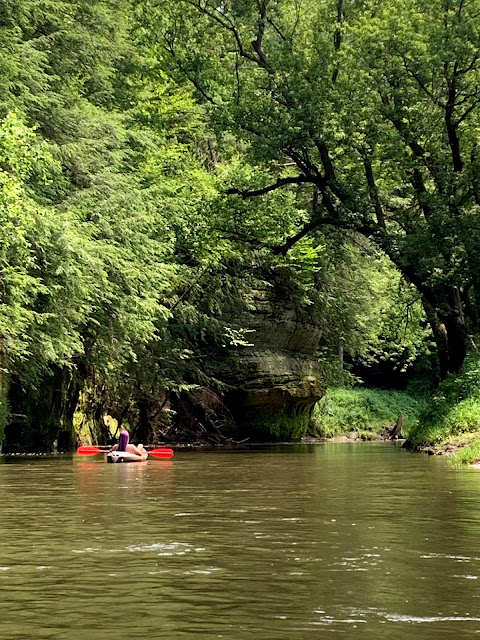 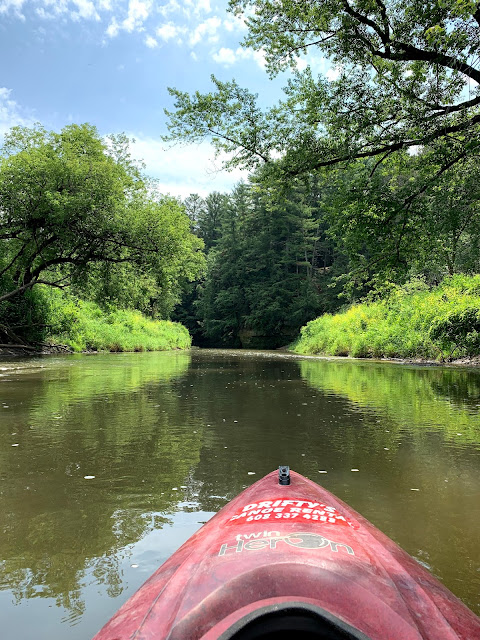 It was so nice to see my such a big smile on my son's face!  He really appreciates coming home and being in nature now that he lives in the Chicago suburbs.  He always says about where he lives:  "Theres just too many people!" 😂 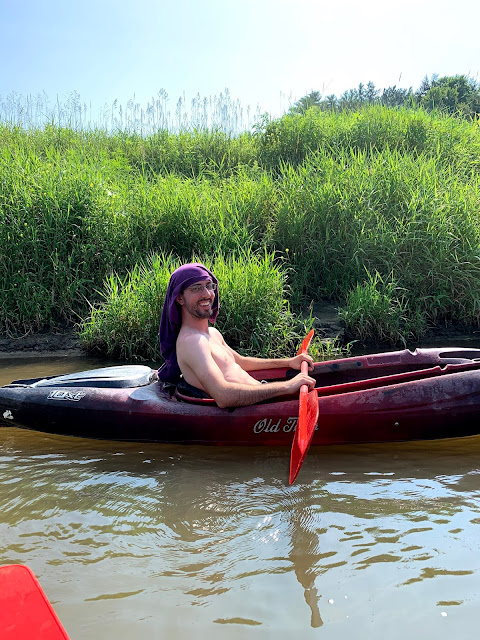 There were these beautiful tall yellow blooms everywhere on the river.  They were so stunning. 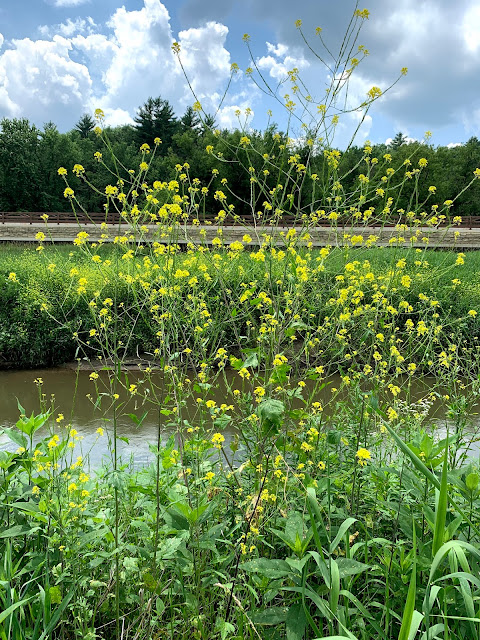 Finally, I want to leave you with a very short video of the trip where you can hear nothing but the sound of the water and the birds, and my own voice.  It was so peaceful.  We went on a weekday and started early in the morning, so there was hardly anyone there.  When I read the reviews on-line the only common complaint was that the river was too crowded with kayakers, many of whom were loud and rowdy.  We did not experience that.  Our bus driver said to always come during the week, because it's a lot less crowded.
Have A Great Day!  Amy
Linking Up With These Fabulous Blogs HERE!
Posted by Amy Johnson at 12:00:00 AM