How To Save Memories With A T-Shirt Quilt

Several years ago I worked full time as a manager at a fabrics and crafts store.  I worked there for six years and during those six years I purchased a lot of stuff!  I probably have enough fabric and scrapbooking supplies accumulated to open my own fabric and crafts store.  When I retired, I always planned on using that stuff;  after all, now I had all this "free time" to spend in the craft room.  But of course, the hours I thought I would have to spend in my craft room everyday was more like one or two hours a day.  Between cleaning, gardening, traveling, and home upkeep/remodel projects I really didn't have as much "free time" as I thought I would.

Years went by and I felt so guilty about all these unfinished projects gathering dust in my craft room.  I felt so overwhelmed by it all, that the joy of creating was taken away from me.  I finally realized I felt overwhelmed because the task was too big, and to make it less overwhelming, I just needed to make my goals smaller and more manageable.  At that time I had three quilts that I started but never finished.  I decided to make it my goal that I would finish one quilt per year.  I started with the simplest quilt of them all, and the one I had the most further along:  a T-Shirt Quilt. 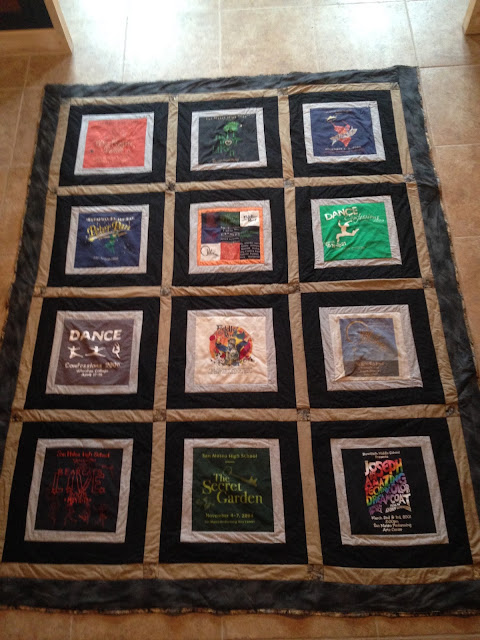 Many years ago my daughter gave me all these T-shirts of her husbands.  They are all T-shirts of plays and dances my son-in-law was in when he was in high school and college.  The T-shirts are packed full of memories, some have the date on them.  The fabric on some of the shirts was so old it was fragile;  but once you iron on the interfacing it makes the fabric much stronger and stops it from stretching. My T-Shirt quilt is a little different from most for it has traditional quilting borders.  Most are just T-shirt blocks connected together like THIS ONE.  That would be the easiest and quickest T-Shirt quilt to make. 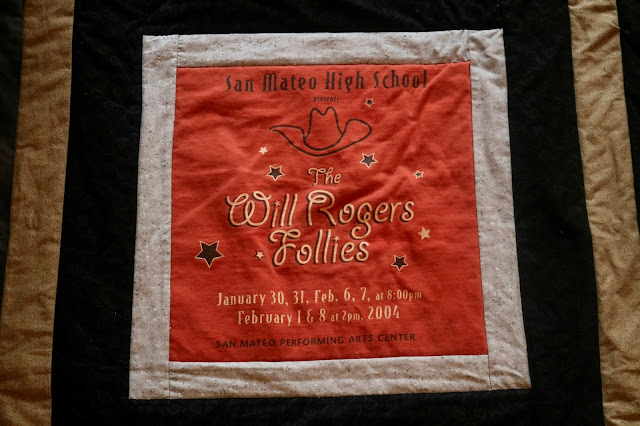 I had a lot of T-shirts that had small graphics, so I cut them up to even smaller squares to make one block.  I put this block right in the center since it was so different from all the other blocks.  I love that my children's names are on these blocks.   My son-in-laws name is in the upper left corner and my daughter's name is in the lower right corner.  Isn't that awesome?  What a memory keepsake! 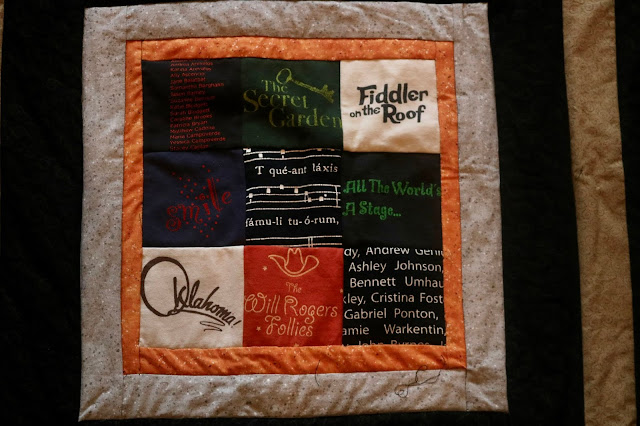 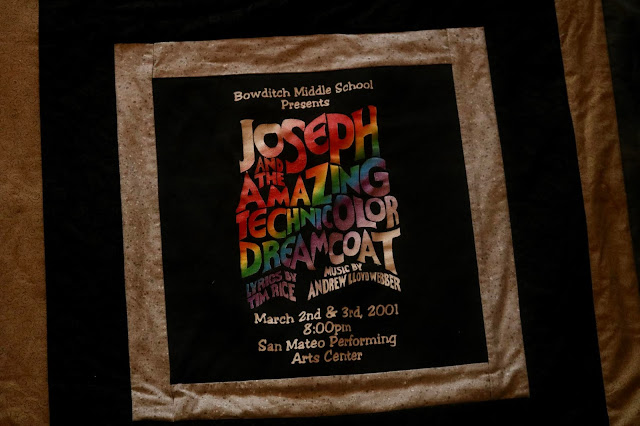 Now if you are a seamstress, you will probably notice how horrible my sewing is.  I will be the first to admit I'm a horrible quilter.  I so much more enjoy the process of designing a quilt than sewing one.  The mathematical precision of quilting drives me crazy.  I often thought I should stop trying to do traditional quilting and just do "Crazy Quilting".  I think that would be more my style. 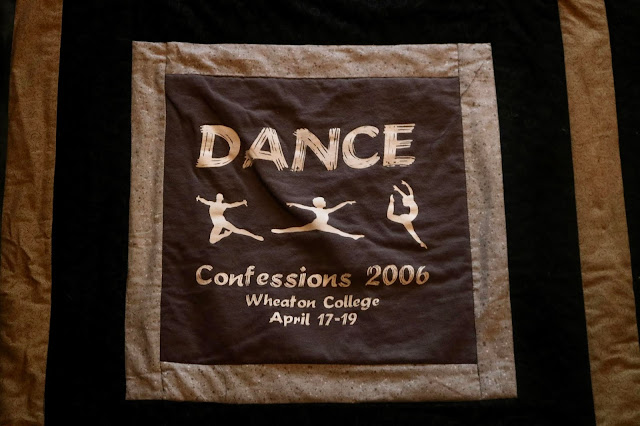 Regardless of my imperfect sewing, I'm proud of myself for FINALLY completing my project;  and I did it all myself!  I even finished it myself with the "Stitch in the Ditch" method instead of paying a professional several hundred dollars to top stitch it. 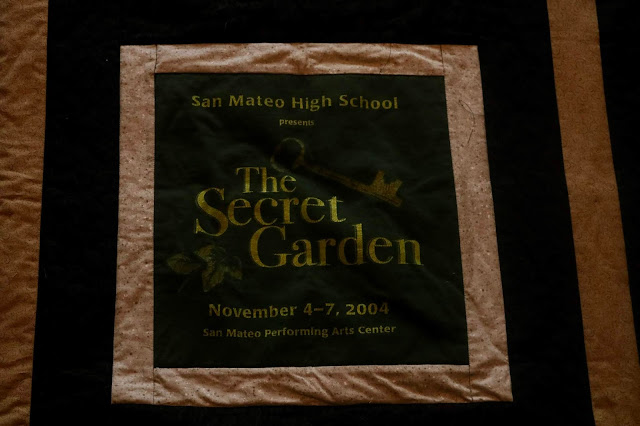 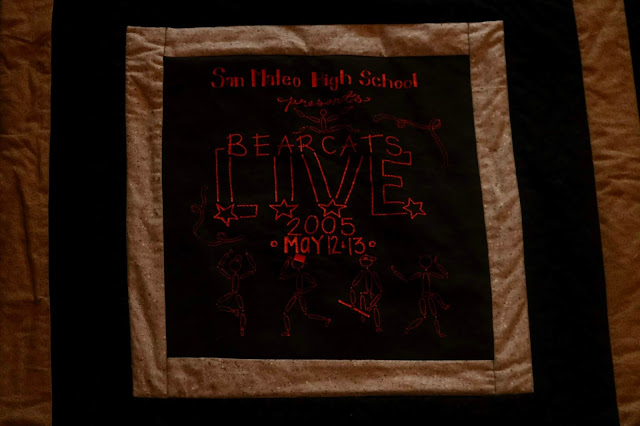 If you're interested in making this type of a T-Shirt quilt instead of the standard style of just sewing the T-Shirts together, the most similar instructions I could find was this one HERE.  The pattern on this website would be much easier as it is only one border between the T-Shirts instead of the three borders on on my quilt. 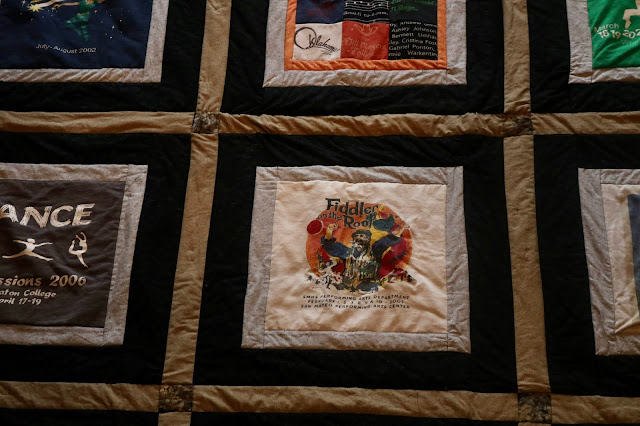 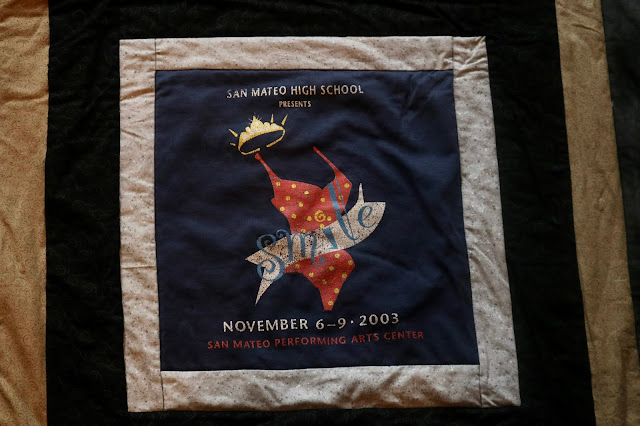 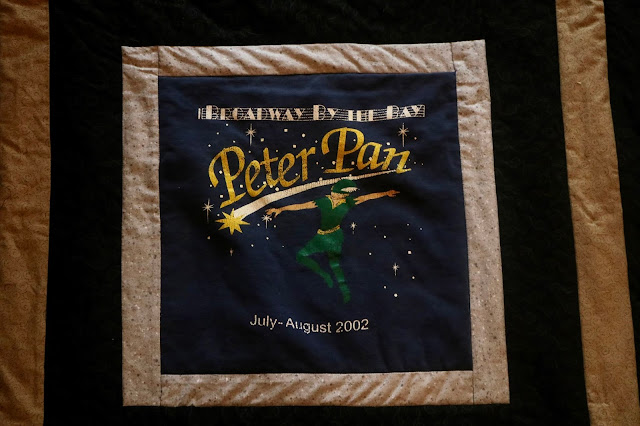 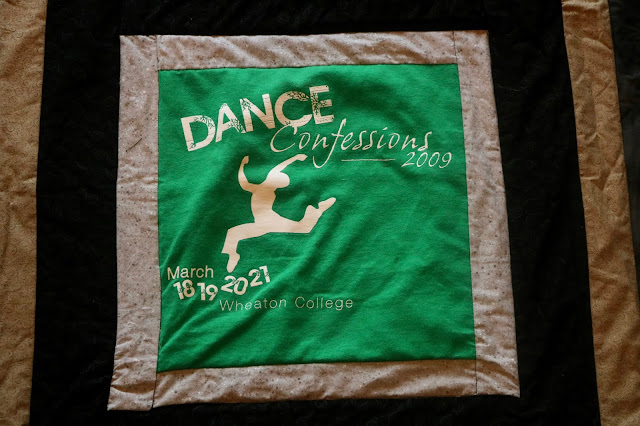 T-Shirt quilts are a great way to preserve memories.  I've been collecting T-Shirts from every place we ever traveled too, and someday I hope to make a travel T-Shirt for myself.  I've also seen people use T-Shirts of sports teams or music concerts.  Oh, the memories you can save on a T-Shirt Quilt! 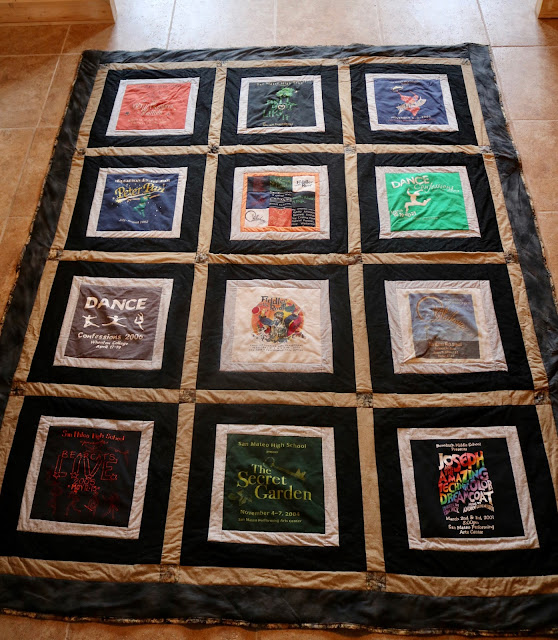