This is a continuation of a series of posts of my Missouri Vacation which I took the first week of September.  To start at the beginning go HERE.  The rest of the posts, in consecutive order are HERE , HERE, HERE, HERE, and HERE.

On day four of our Missouri vacation we went to Onondaga Cave Park.  We were suppose to spend the entire day at this park and then retire in Rolla, Missouri for the evening, but we ended up just spending the morning there.  The reason was we took the back roads to get there (because we were following our GPS for shortest distance) and it seemed to be no where near any civilization.  It actually creeped me out a little.  I don't know why, but as much as I love nature I still prefer some resemblance of some civilization somewhere...even if its just a mom and pop store.  It just offers me reassurance that if there was an emergency there would be help I guess.  But, because we didn't see any stores, restaurants, or gas stations, we were unable to pick up anything for a picnic lunch.  Then when we got to the park I kept seeing all these bear warning signs..."Well, of course.  Why not?" I thought.  "We were after all in the middle of nowhere!".  The lack of civilization and all the bear warning signs put me on edge, and I had no desire to hike any trails deep in the woods that day.  😁  Plus, we had no lunch and frankly, we were on our third hiking day and I was starting to tire of it and needed a break.

So we decided to just see the cave and head to the nearby town of Rolla for lunch.

We first stopped at the park office to buy our cave tour tickets.  The admission to the park is free, but if you want to see the cave you have to buy a ticket.  They cost $15.00 a piece for an adult and the tour was about an hour and half long.  There are actually two caves in the park you can see:  Cathedral Cave and Onondaga Cave.  You can see both caves on the same day for $20.  We chose to just see one cave as they were quite long in both time and distance. 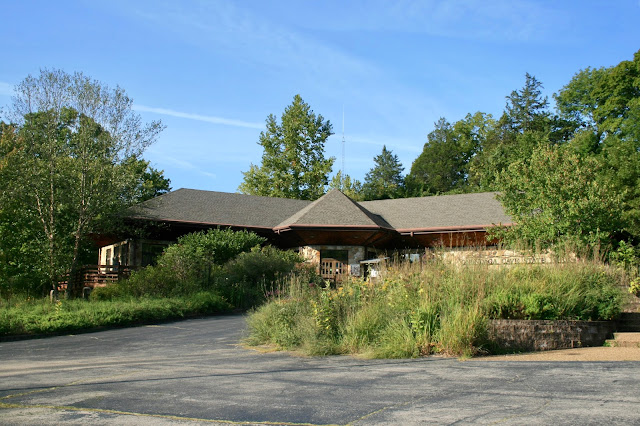 Because we arrived right when the park office opened, after we bought our cave tour tickets we had some time to kill.  The park ranger recommended we go on a short, nearby trail called the "Blue Heron Trail" 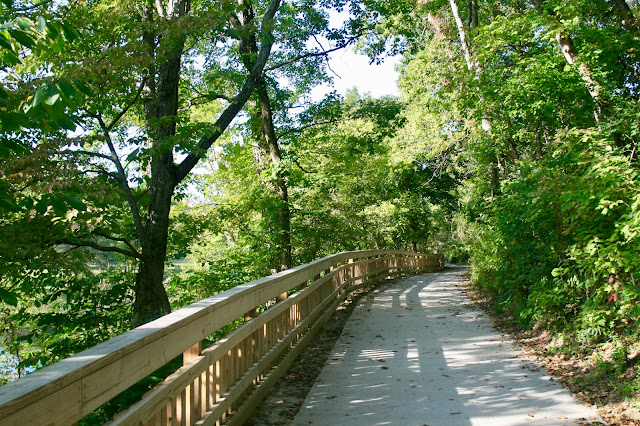 This was such a nice trail to take;  especially in the early morning and after several days of more rigorous hiking.  It was just so relaxing and peaceful.  We did see one blue heron, but unfortunately he flew away before we could get a picture.  But we also saw turtles and ducks, and thankfully, no bears! 😃 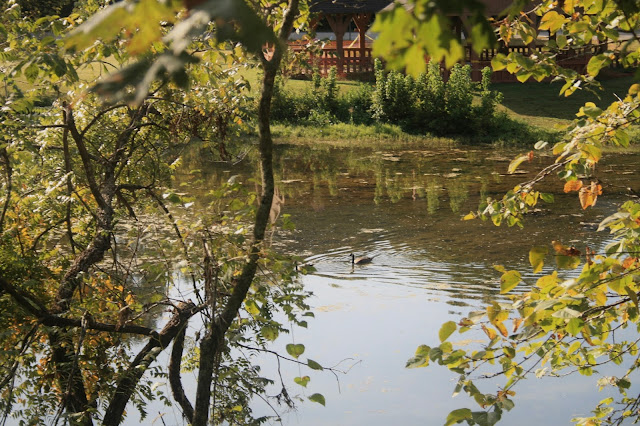 The trail is short, level, and paved so anyone can enjoy it.  The views are absolutely breath-taking.  There is a small waterfall on this trail which is really an old mill raceway that was powered by water from the Onondaga Spring.  A dam and millrace constructed in 1886 detains the water before it spills into Spring Lake.


There is also a lovely picnic pavilion across the lake from the trail. 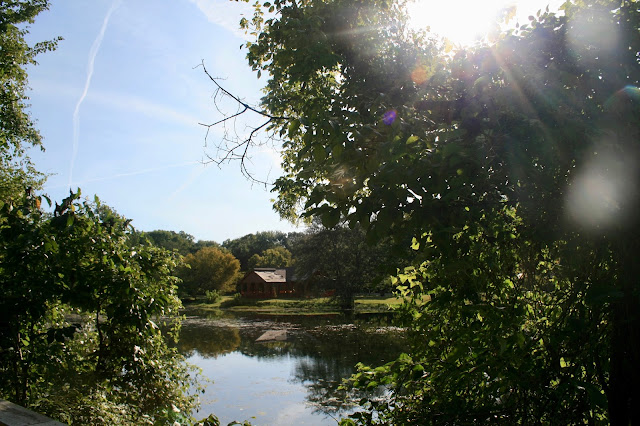 The trail is only a half mile long, so we took our time and really just soaked up all the sights and sounds of nature. 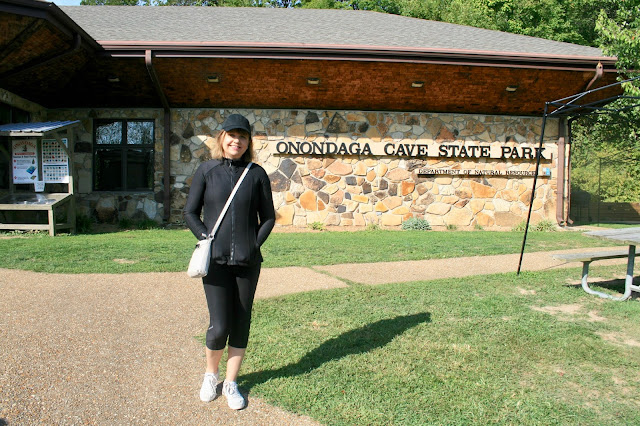 After our short hike, we went back to the park office where they had a gift shop and  educational displays to look at before the tour began.  This cave tour you can access directly through a door at the park office.  The other cave in the park requires a one third mile walk up Deer Run Trail to access the cave's entrance.

My husband and I had only been in a couple of caves before this tour which were must smaller in scale.  This was by far the largest, longest, and most impressive caves we have ever seen.  The caves we were in up to this point were the claustrophobic kind:  you know, low ceilings, tight spaces, etc.  This one was so huge the Titanic could have fit inside.  I've never seen anything like it before.

Now even though we had an excellent guide who explained what everything in the cave was and how it was formed, I literally remember none of it.  So if your expecting a scientific explanation of all the pictures I'm about to show you, you will be disappointed.  I majored in English Literature and Theatre in college;  science is not my gift! 😉 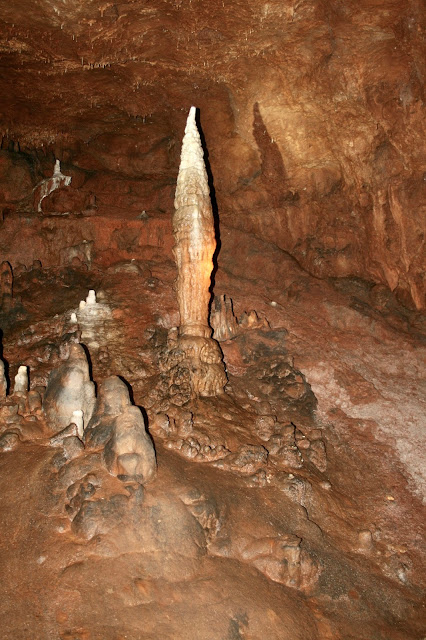 These giant stalagmites (Don't be impressed that I knew what these were, I googled it.)  are called "The Twins". 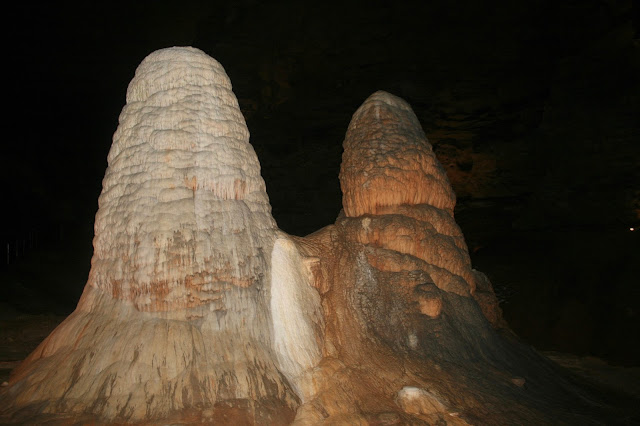 Everywhere you looked, it seemed there was another miraculous site.  I loved this wall!. 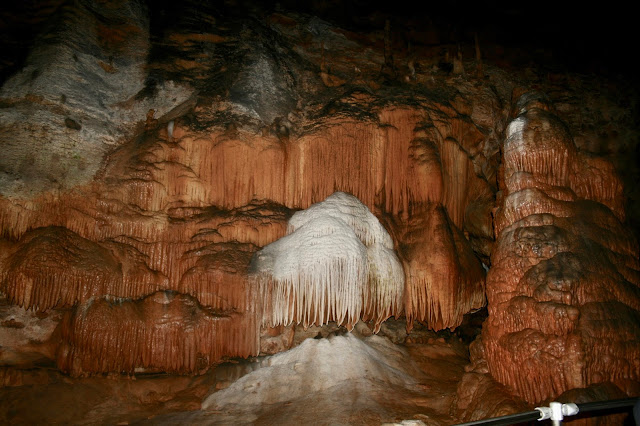 There was lots of water in this cave, and we did see some small fish too! 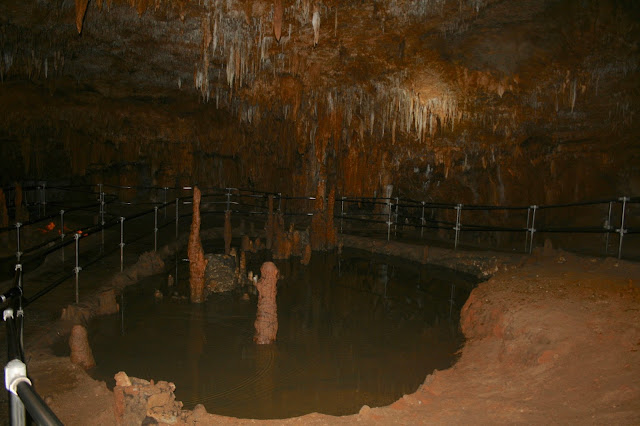 The paths are all paved, but can be slippery because of the constant dripping.  If you go, I advice wearing a hat and shoes that grip.  It can also be a lot of walking for some people as there are some steep ramps and steps.  They had a few benches in spots for people that may find it to tiresome. 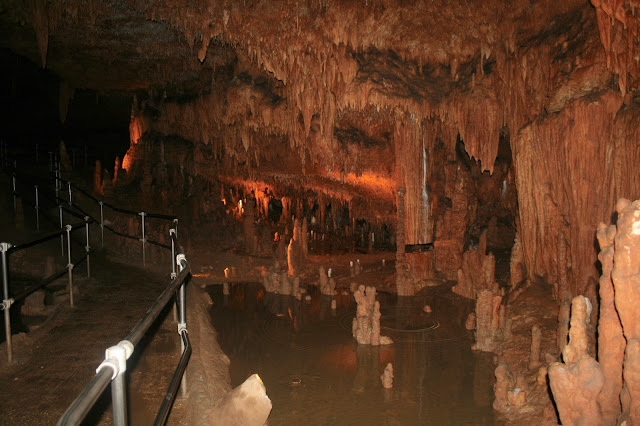 I love this stuff that looks like cake frosting...it almost looks good enough to eat! 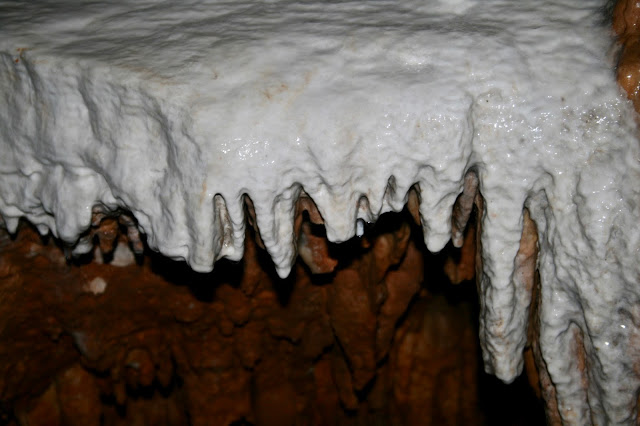 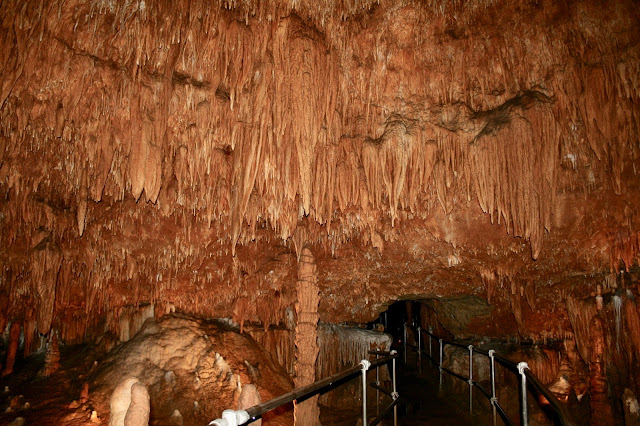 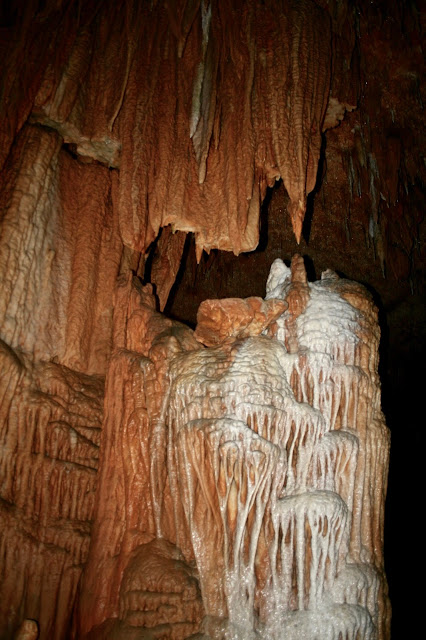 This was one of the most impressive spots in the cave.  I wish I could give you an idea of the scale of these formations.  They were huge!  If you look at the safety railing and imagine that coming up to an average person's waist, now look how much higher the formation is! 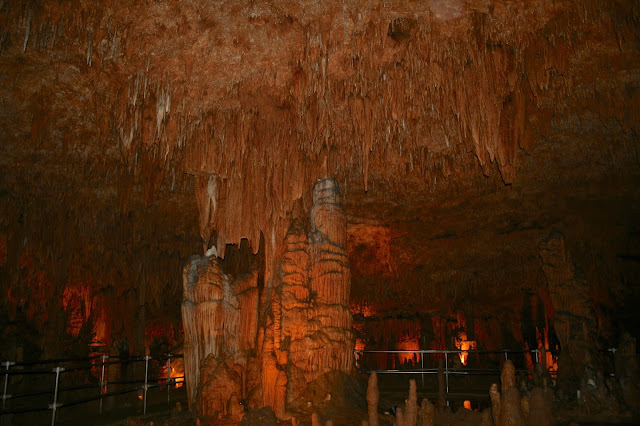 The path took us all away around the formations so we got to see them from all different viewpoints.  I think they call the column on the left "Rock of Ages" 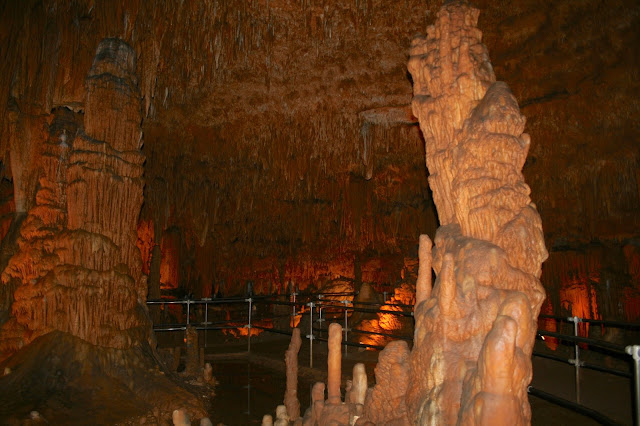 Because of the darkness of the cave, it was difficult to get large scale pictures of the cave.  Here is one that did turn out.  See how far and up the trail goes? 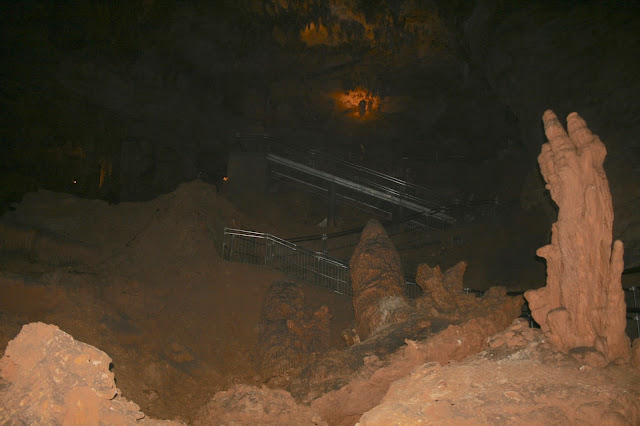 The trail went around and up to the very top of the cave's most impressive formation:  "The Queen". 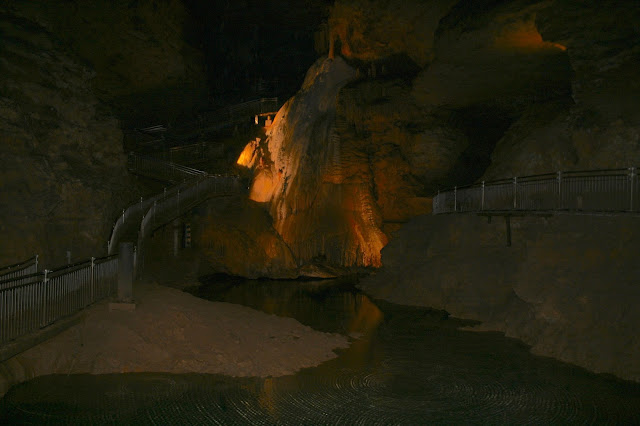 My favorite spot in the cave wasn't a big formation but a little one:  The Lily Pad Room.  I just loved the little little pads formed on top of the water. 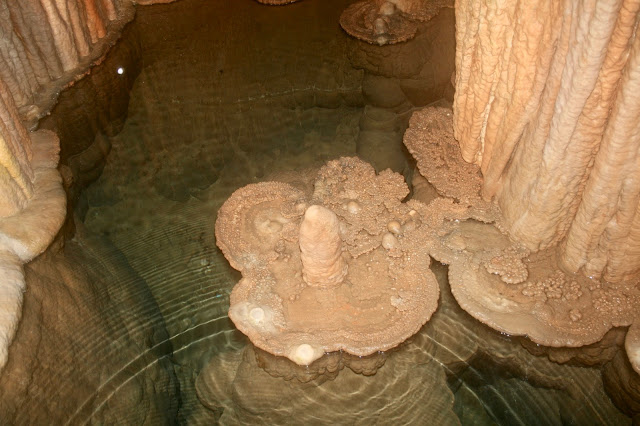 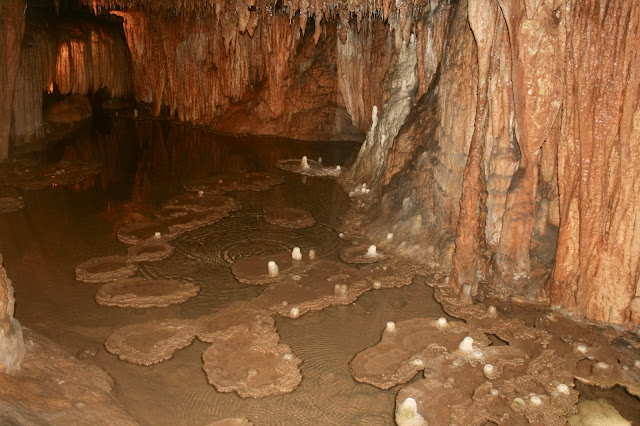 We did get lucky and spotted one cave salamander. 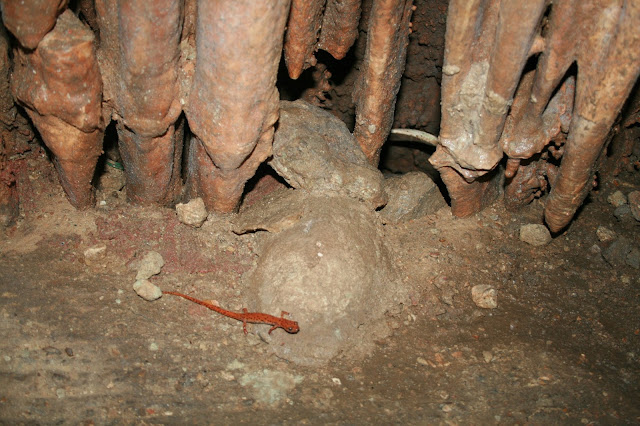 Our tour guide referred to these as 'Soda Straws". 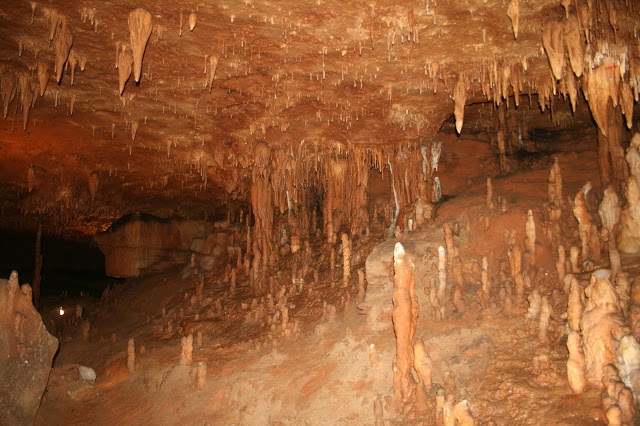 He said the soda straws eventually grow into these: 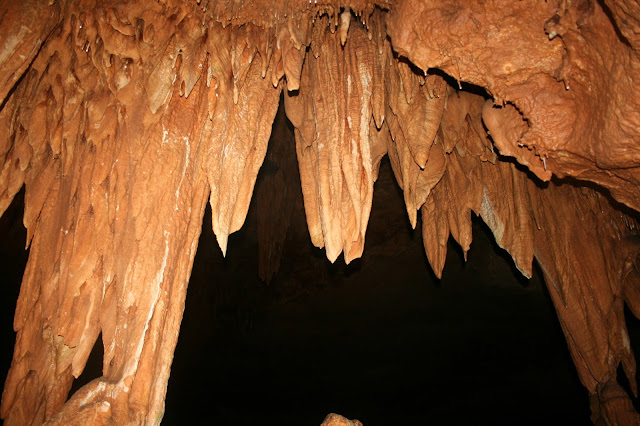 We did see breaks in the formations now and then.  Our guide said they could have been caused by earthquakes or other shifting of the earth. 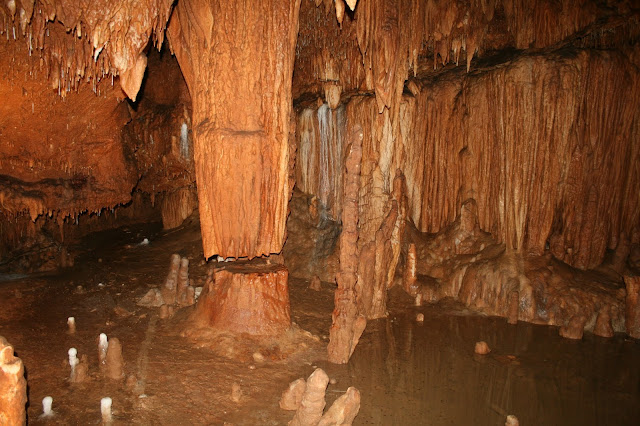 Onondaga Cave State Park is open all year long but the cave tours are only available from Mid April through Mid October.