In last week's fashion post,  I showed you the outfit I planned on wearing Easter Sunday.  I still plan on wearing that outfit, but due to an oversight, my Easter plans have changed slightly so I won't be needing a second Easter outfit.  Long story short, we have been driving to Milwaukee every Easter weekend for years to see an Easter musical.  I automatically made hotel reservations for the holiday weekend never bothering to look up the dates of the musical this year because it's ALWAYS on Easter weekend.  Well I was on Facebook this weekend and I noticed everyone posting pictures and talking about the musical.  "What?"  I thought.  "How can it be this weekend?  Easter is next weekend!".  So I went on the church's website and sure enough, they moved the performances to a different weekend for the first time in over thirty years.  UGH!  I was so upset!  Everyone on FB was saying it was the best musical the church had ever done.  I was so disappointed we missed it.  Then to make it worse, our hotel room is non-refundable!  So we decided to go make the best of it and go to the city anyway Easter weekend and spend time with old friends.  We will still get to see our kids too plus take in the Easter Sunday Morning service.  But, I'm still disappointed to miss the musical.  We look forward to that every year!

Anyway, I bought a second outfit that I will not be needing now since I won't be attending the musical.  My husband said "Wear it anyway".  And I said "No, it's too dressy just to hang out with friends".  I have no idea when I'll wear this outfit now as my life pretty much of consists of going out to eat and shopping.  I might be able to wear it to church, or on one of our travels.  I know some of you are probably thinking, "It's not dressy at all!"  But in my small back woods world, it's dressy.  But just because I didn't wear it doesn't mean I can't show it to you all, so here it is! 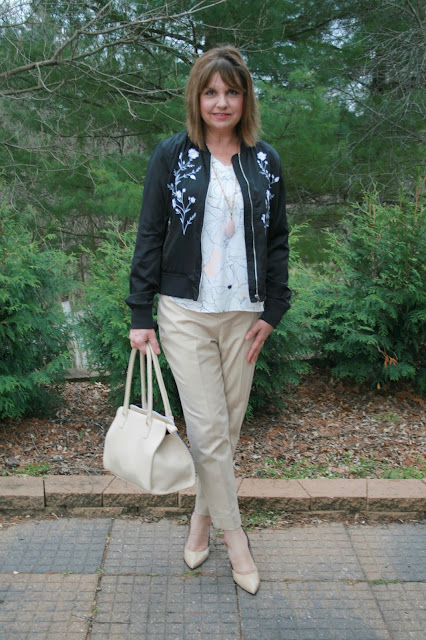 The outfit was planned for a four hour car drive and a three hour church service/musical so that is why I chose elastic waist pants and not a dress.  I picked up these pants at Ross and they came in S, M, L.  I bought the size M and I thought they looked like they fit great in the dressing room mirror, but when I look at these pictures they seem a little big to me.  My husband didn't think so, what do you think? 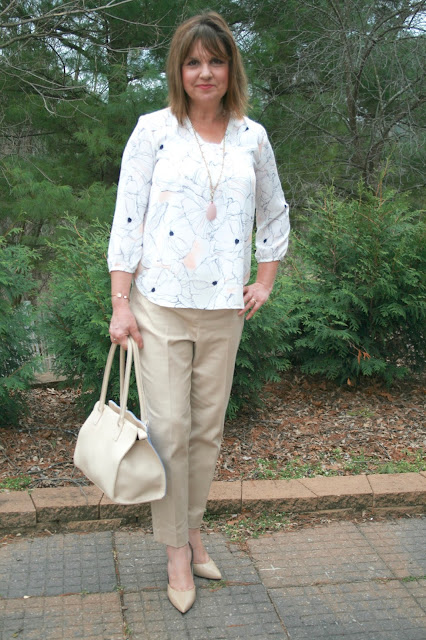 The floral top I picked up at T.J. Maxx.   I was very drawn to the poppy print and how it's a floral but not a "in-your-face" floral if you know what I mean.  It's a very subtle floral. 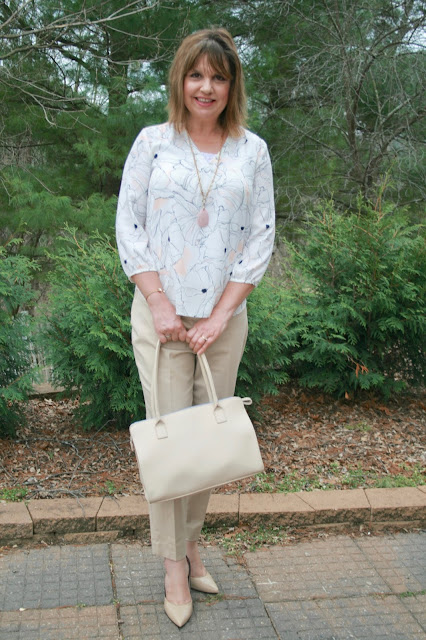 For outer wear I chose my new black embroidered bomber jacket.  I previously showed it you before in THIS POST. 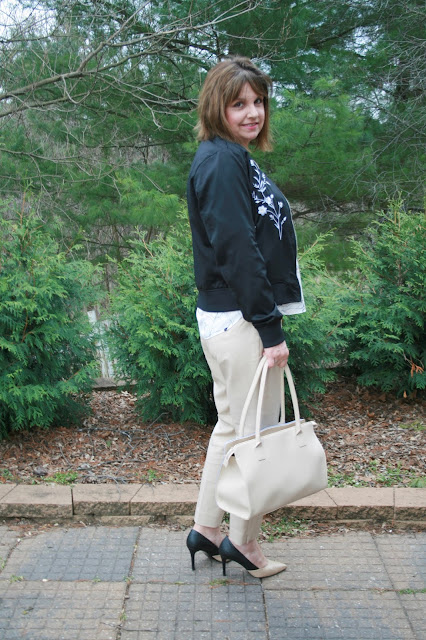 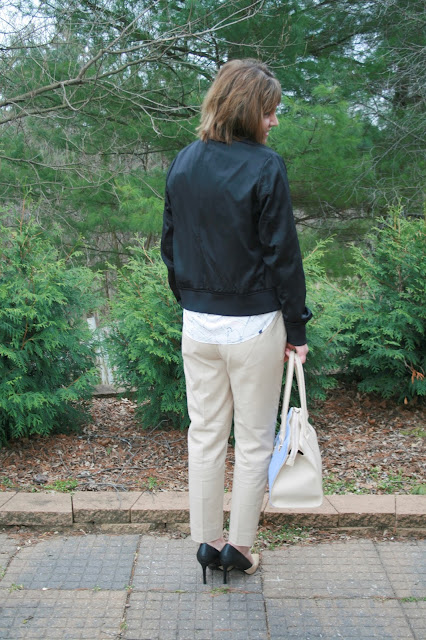 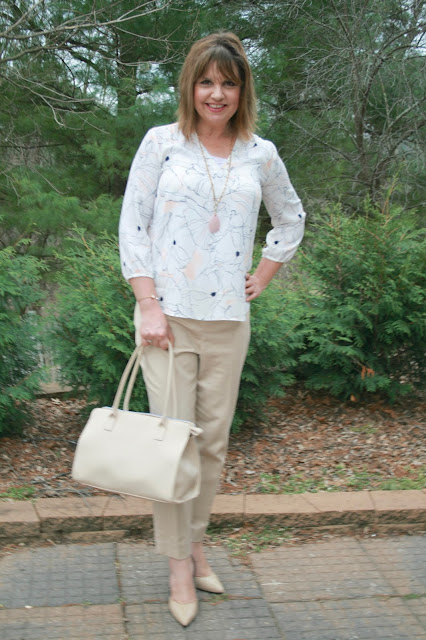 For jewelry I chose this long peach pendent necklace to draw out the peach in the top. 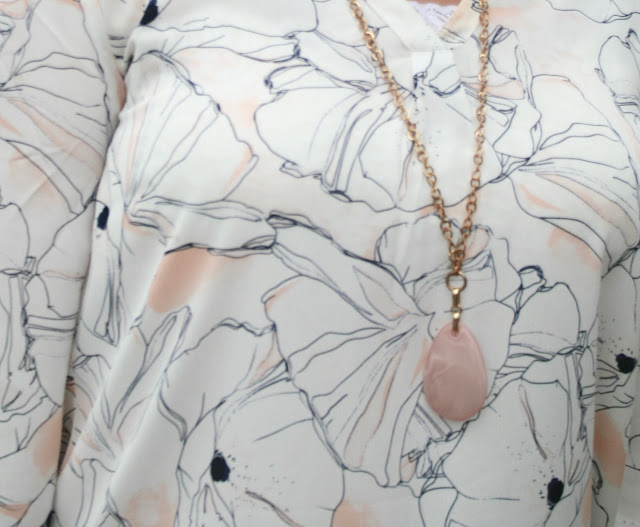 I chose the beige handbag and just turned it so the periwinkle side faced inward.

I also wore a simple gold and diamond bracelet on my wrist. 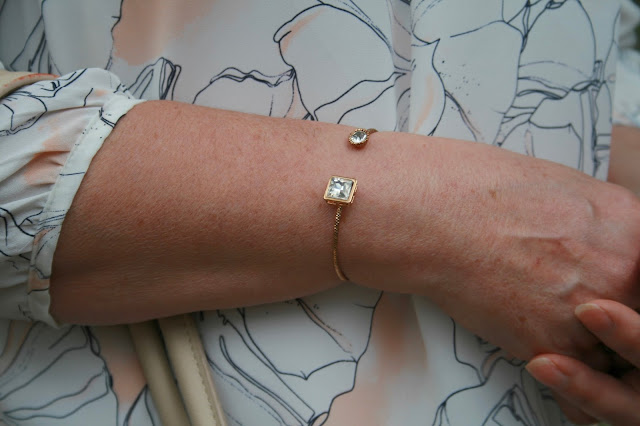 The top is sheer, so I wore a white lace camisole underneath.  It has three quarter length arms with elastic in the hem.  It's a very nice lightweight top for spring. 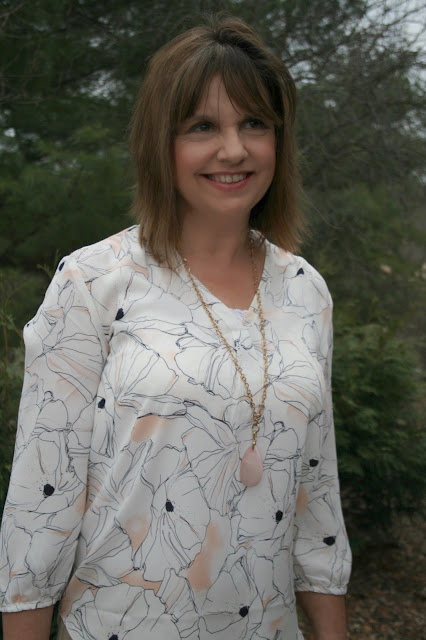 I chose to wear my color-blocked black and tan pumps since I would be mostly sitting.  These shoes are so uncomfortable, I can never wear them if I plan on being on my feet much.  I really need to stop buying pointy-toe shoes.  They do not work for me.  But, they are so cute I can't help myself! 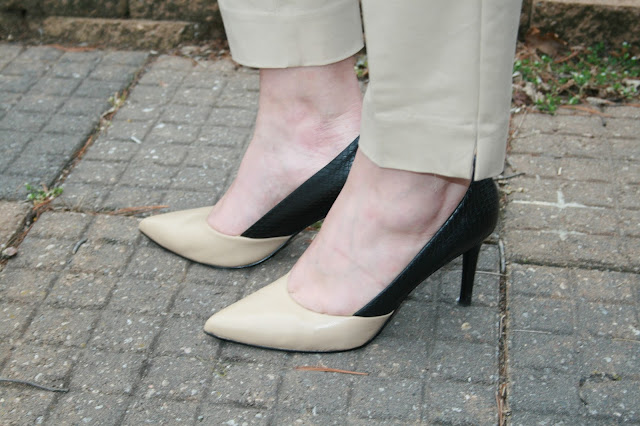 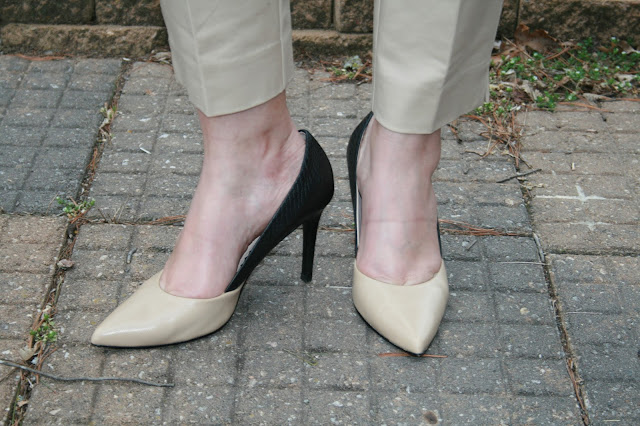 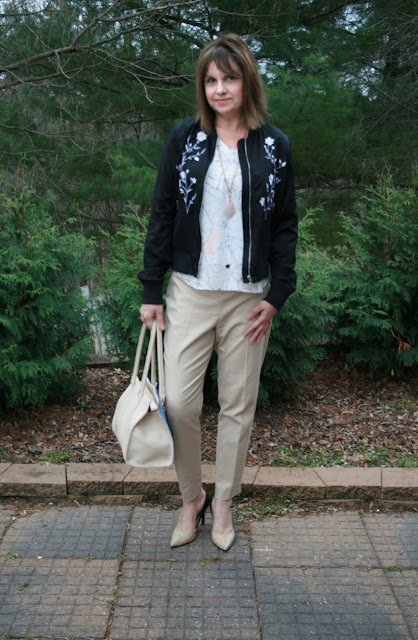 Next I want to show you the outfit with flats.  Originally, I was going to wear the outfit with flats to be more comfortable, but after I saw these pictures I said "Nah! My legs look too short".  It could have been the picture angle and not the flats at all My husband took the pictures straight on instead of shooting up or down like he usually does (Photography can be so deceiving! After years of fashion photography we know how to take pictures to make me look a lot thinner and taller than I am in real life!).  But he didn't like the outfit with flats either and told me to try it with heels, so I did. 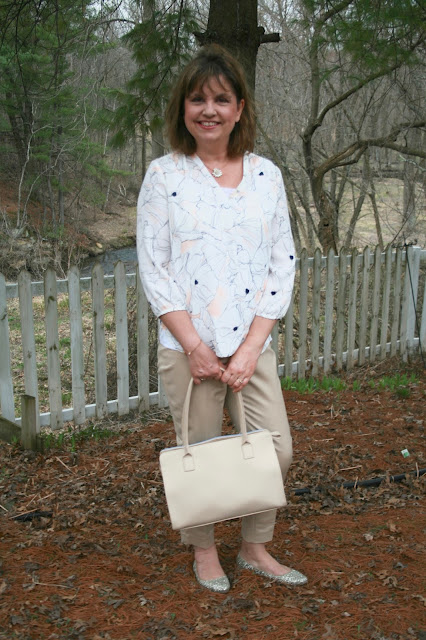 I thought I would still show you the pictures because some women only wear flats and would like to see the same outfit with different shoes.  If you notice, I also have a different necklace on as well.  After I saw the pictures, I just thought the necklace was too dressy and switched over to the pendant. 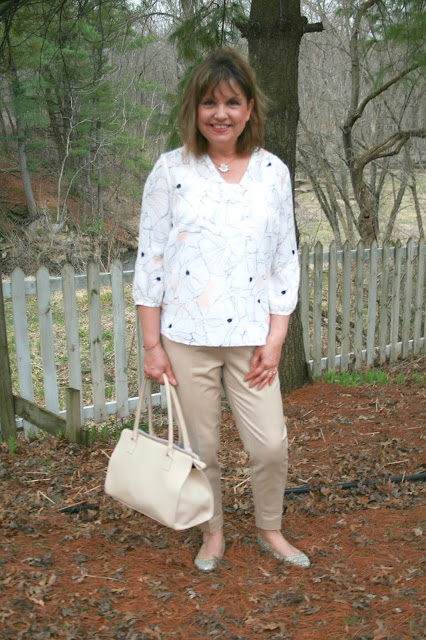 These are such cute flats, I really don't get much use out of them though.  They are not very comfortable and they are so sparkly I can't wear them with too much.  I bought them at Old Navy a couple of seasons ago. 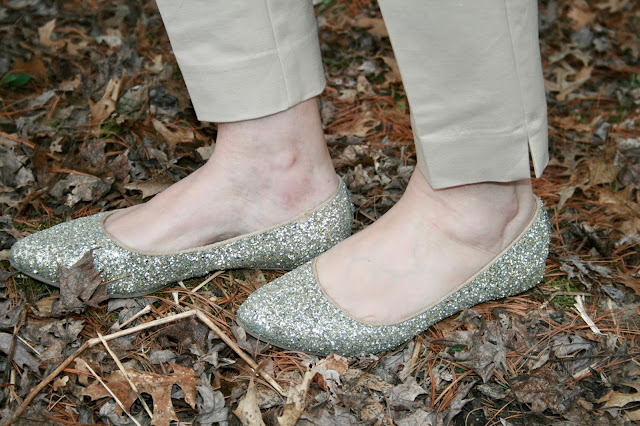 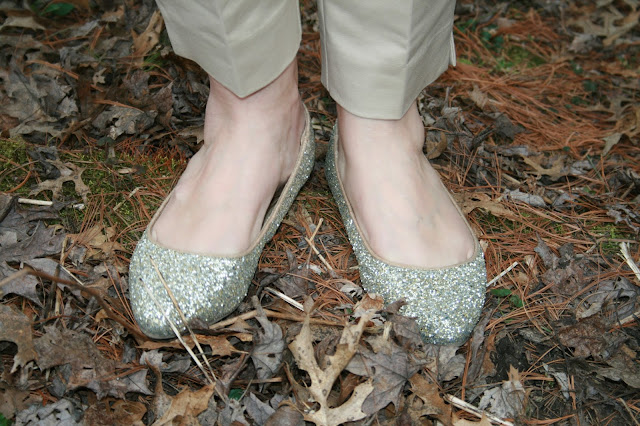 So which way do you like the outfit better?  With the flats or the pumps?  What about the necklace?  Which one do you prefer?  I'd love to hear from you! 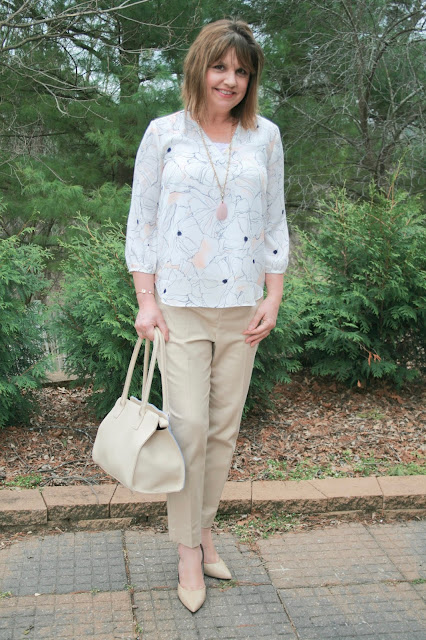