Fashion Over Fifty: Some Role Models and What I Wore in the Big City

Hello!  This week's Fashion Over Fifty post is going to be mostly about some role models that have inspired me.  A couple of weeks ago, I came across a very inspiring documentary on the Inside Out Style Blog, it's forty five minutes long, but if you have the time to watch it, I highly recommend it.  It is  about the lives of  six elderly women between the ages of 70 and 90 and how they still dress fashionably for their age.  But even if your not interested in fashion, you would still enjoy watching this, it's probably the best 't.v.' I've seen in a long time.  It will make you both laugh and cry as these amazing older women share their lives, their love stories, and their 'opinions'.  I loved how each one of these women has their own unique sense of fashion, and none of them seem to care what anyone thinks of the way they dress.  They live life and dress the way they love to dress, and they really don't take age into the equation;  although one woman said she had terrible feet, so instead of wearing heels, she wears sequined tennis shoes!  What a fun alternative!

Then a few days ago I discovered another wonderful blog called Advanced Style.  This blog is actually written by a young man who is inspired by older women who dress fashionably.  He says he basically 'roams the streets of New York looking for the most stylish and creative older folk', and then he asks if he can take their picture.  What beautiful photographs this man takes!  And how rare it is today to see a young man who respects and admires the older generation.

When making a decision to start writing about fashion I was really worried about being judged.  I thought about it for a full year before I made my Very First Fashion Over Fifty post.  My biggest fears was that I didn't want anyone to think I was vain, materialistic, silly, or worst of all, a big joke:   after all, who was I to write about fashion--I certainly don't have a degree in fashion.  But when I really examined my motives, they were pure of heart:  I simply want to inspire women who feel that they are no longer pretty, desirable, or wanted, simply because they are old.  I wanted to let them know, that they still matter, that they are still needed, and that no matter how old they get, they can still dress up, wear the latest fashion trends THEIR way, and that they are still beautiful.

I was thinking about fashion and the interest I've had in it all my life, and I was reminded that no matter what my age, throughout my entire life I was always being told not to dress a certain way because of my age.  When I was young, I was told not to wear make up or heels because' I didn't want not to look too grown up',  then when I became a mom a teenager told me I couldn't wear the latest trends, because 'I was a mom now and I had to dress like a mom'.  When I was in my thirties, a friend mocked me because I mentioned I wanted to wear a head band that a twenty-something had on and she said I was' too old for that look'.  Now that I'm in my fifties I'm hearing quotes like 'nothing  makes a woman look older than a woman who tries to dress young', or 'if you remember wearing something a couple of generations ago, your too old to wear it again.'.  Stop it. Everyone. Yes, there are some elements of truth to all these statements, but no, we don't have to abide by certain 'rules' when it comes to age and fashion.  Let's try to balance these rules by keeping them in the right perspective.

I recently received some great advice from Imogen, the author of Inside Out Style,  and a professional fashion stylist in New York,  when I commented on her blog that I was afraid to wear the colors purple and red together for fear that I'd be a walking advertisement for the Red Hat Society, and she replied 'It's all about the style of clothing you choose and how you put it together.  AGE HAS NOTHING TO DO WITH IT! (caps are mine), make sure that your reds and purples aren't too vivid, but more smoky. Make sure the styles of clothing aren't frumpy,....age is JUST A NUMBER!"  (again, caps are mine).  Then, when I commented on the documentary that I mentioned in my above opening paragraph, about what an inspiration the women in the movie were to me and how I wish I had friends like that in my own life, Imogen wrote back 'Be one of these women Amy!  You can be an inspiration for others!' So Imogen, I'm taking your advice.  I'm going to be one of these women and be an inspiration for others, and if anyone judges me, and thinks I'm doing it for any reason other than this, well, shame on them.

Now, enough preaching for one post.  I recently went to Chicago to visit my daughter.  It was a beautiful warm weekend but unfortunately I brought all the wrong clothes with me and was sweltering in the heat.

In the photo below I'm standing by one of the many beautiful fall floral beds on Michigan Avenue.  I actually intended to wear an amazing new brown leather jacket with this outfit, which would have really completed the look, but it was too warm.  Because I knew I would be shopping and walking all day, I dressed for comfort, not beauty.  Looking at this photo now, if I could change anything about this outfit it would be the pants.  A dressier, darker denim would have looked so much better than the casual jeans I have on, but when I looked in the mirror, I thought it went great together at the time.  Isn't it funny how you can look in the mirror and get one perspective of yourself, and then have a photo taken and see how others really see you in real life?  I guess it's a really good reason to take lots of photos of yourself.  And it's also quite humorous that I'm carrying a 'Forever 21' shopping bag after all my preaching in the above paragraphs. LOL!  I bought scarves there ladies, scarves!  Oh, and a sweatshirt too! 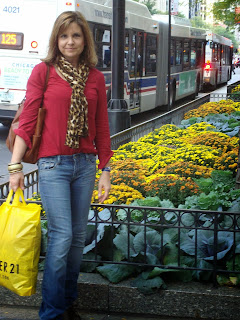 Even though it was warm, Chicago is still known as the windy city and there was a slight chill in the wind, so the leopard print scarf really came in handy.  The sheer long sleeve blouse from Express and the slight warmth the scarf added, were  perfect for the weather, and also had fall colors and styles.

I didn't spend too much money on Michigan Avenue.  Their prices and taxes are much more expensive than Wisconsin or Minnesota, and I could find the same items on line that I saw in the stores cheaper too.  However, I really learned a lot.  I think my daughter and I spent most of our time there just studying the window displays and mannequins and seeing how creatively outfits were put together by the designers.  I also found it fascinating to see stores and designers I could never really afford to wear in real life like Michael Kor and Kate Spade.  What beautiful works of art expensive clothes are.  I could never morally justify spending money on those type of clothes, even if they were in my price range.  I think I would always feel guilty while wearing them because I would be thinking 'the cost of this purse would feed a family for a year in a third world country'.  But, I did enjoy looking at their exquisite beauty.

In addition to visiting Chicago, my daughter and I also toured a few smaller towns in the greater Chicago area, one of them is called Naperville where they have a lovely covered bridge and river walk where these pictures were taken.

Again, it was warm, so this is what I really had on that day:  boot cut jeans from Express and a striped tee from H&M. 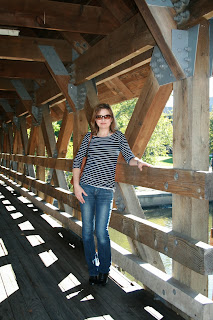 But this is the outfit that I planned on wearing but ended up only wearing for the photograph.  It's far more put together with a black jacket from Express and a burgundy scarf from T.J. Maxx. 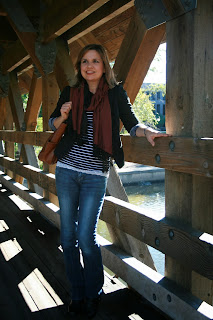 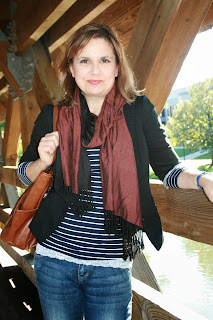 Have a wonderful, fashionable day! Amy