Hello and welcome to another Digital Tuesday Challenge.  This week's challenge is Steampunk.  Now, I've never heard of the term 'Steampunk' before, so I had to look it up.  HERE is a link for you if you want to read more about it.  It's basically Victorian inspired, and it has a lot to do with the technology of the time before electricity and the social rebellion of the era.  It's a very complicated genre, but for those of you who are familiar with Tim Holz's work...he is very Steampunk. Our sponsor this week is Spesch Designer Stamps, and they are giving away 3 digis to one lucky randomly chosen winner. To qualify for the prize, simply make a card or project with the Steampunk theme, and be sure to include at least one digital element.

Now, being a CAS designer, the Steampunk style is definitely not my style.  So I decided to make a Belated Birthday Card that is Steampunk inspired.  I chose to use 'The Rabbit' image because the story of Alice in Wonderland is from the Victorian period.  I used Victorian colors, two Tim Holz embossing folders (the top one is clocks and the bottom one is gears), and copper accents which also represent that the Steampunk style.  I printed my image and cut it out and let the pocket watch overhang the card base to further illustrate the 'lateness' of the event.  My sentiment is from the Disney Film 'Alice in Wonderland' and is computer generated. 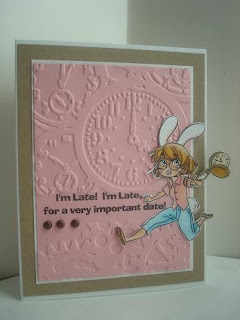 If you'd like to play along with us this week, simply click on the Digital Tuesday Blinkie in my sidebar and it will take you directly to the Challenge Site with further instructions.