Hello!  Today I have some cards to show you that are totally not my usual style, but I wanted to show them because they are an example of 'recyling unwanted cards'.  Several YEARS ago, when I use to sell my cards at the local consignment store, they specifically requested for me to make First Communion Cards,  Well, I'm not Catholic, so I had to buy a $15.00 First Communion Stamp Set, and I feverishly began working to create about 13 First Communion Cards.  They were gorgeous, but you know what?  NONE of them sold!  I was not happy that I wasted so much time and money on them.  So, long after the consignment store closed, I still had these beautiful cards that I hated to just throw away yet I knew I would never use because I didn't know any Catholic little people who were celebrating their First Communion.  So I finally decided to 're-purpose' them.  Since a majority of the cards were 'purple-themed' because of the grapes and wine in the First Communion image, I decided to use an old Princess Tiana Sticker/Embellishment set I purchased on Clearance at JoAnn's Fabrics and Crafts.  I got this set for only $1.97 and the stickers are gorgeous in real life.  They are all dimensionals and covered in glitter/sparkly gems.  Here's a group shot of what I created through 'recycling': 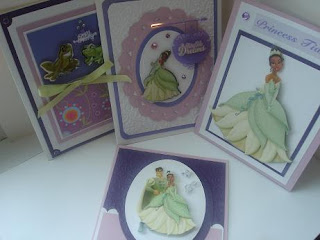 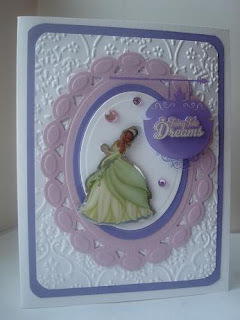 This one is my least favorite of the bunch, but I thought it might make a cute anniversary card.  Quick and Simple! 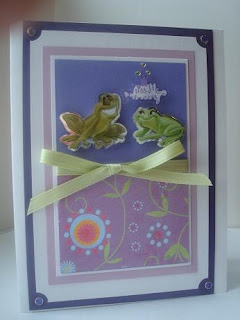 I think any little girl would love receiving this card for her birthday. 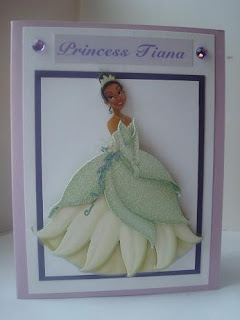 And finally, this sweet card would be good for an anniversary too, and I always have plenty of those cards I need! 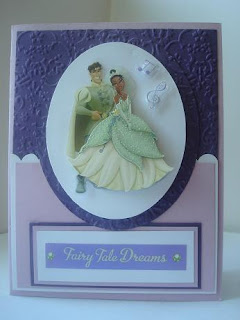 I hope I've inspired you to take all of your unwanted cards and recycle them!