Hello Everyone! I'm Home! I arrived home from Italy around 2:00 a.m. in the morning. My dear husband and son had a bouquet of flowers and a computer designed sign that said 'Welcome Home! We missed you!'. It was the sweetest thing they've ever done. It took me 24 hours to get home with all the flight changes and time zone changes, and I only got about 3 hours of sleep during it all, and then about 5 hours of sleep last night, so I am feeling tired! I spent the day unpacking and doing laundry. Thankfully, my husband and son had a clean house for me to come home to, so I didn't have to worry about that.

Anyway, with the exception of the Digital Tuesday Challenge which I am required to post every Tuesday, for the next 10 days I intend to show you nothing but pictures of Italy and tell you all about my wonderful adventures there. So if your not interested in anything but paper crafting, you might want to ignore my blog for the next week and a half, but since my blog is about anything of creative interest to me...I will be talking about Italy....one of the most beautiful places in the world and the place where some of the best artists in the world came from. After seeing the beauty of this country, I now know why so many artists came from it. What inspiration!

Believe it or not I left my house at 9:00 a.m. on Tuesday the 10th, and did not arrive in Italy till about 1:00 p.m. on Wednesday the 11th (that's including the 6 hour time change). We had to change planes 3 times to get there, that's why it took so long. Our longest flight was 11 hours. I had no idea how big the Atlantic Ocean was before I took this trip. During the International Flight they have a video monitor constantly on showing the world globe and where the plane is, so you always know exactly where you are at all times. I don't know how many times I looked at that monitor after several hours passed only to see the plane move an eighth of an inch. It gave me a greater appreciation for the all the earlier settlers who traveled to America by boat!

Here is a picture of me as we begin our journey....all smiling, happy, and clean and pretty. If only I had someone take my picture AFTER the 24 hours of travel! I did not look like this! LOL! 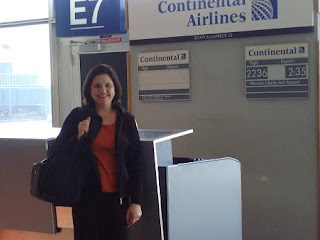 We boarded our first plane in Minneapolis, Minnesota and flew to Chicago. I was absolutely awestruck with the beauty of the O'Hare Airport. Here is a picture of the ceiling in one of the underground walkways. There was this beautiful electric light show above our heads as we stood on the automated walkways. It also played music, and the lights went on and off with the beat of the music. It was so cool. 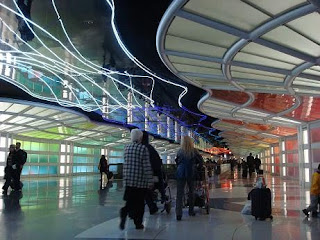 After we boarded our plane to Chicago, we flew for 8 hours to Frankfurt, Germany. The plane was filled with people of many different cultures, it seemed everyone spoke a foreign language..mostly German, but I just thought it was cool being surrounded by so many different people from all over the world. The plane ride was torture for me. We flew coach, and we were right in the center of the plane with people on either side of us. The seats barely recline, so it was hard to sleep. I didn't have a neck pillow at that time (trust me though, I learned my lesson and bought one for the ride home!) and had nothing to lean on, so sleep was almost impossible. The worst part was my butt. Unlike most women, I do not have a lot of padding on my butt. I have always been heavier on top, and smaller on the bottom. So my tail bone was killing me having to sit for so long. I was so grateful for all the movies I could watch, it helped kill a lot of time.
Other than Canada, I have never been outside the U.S.A. before so I was kinda nervous going through Customs in Germany, but everything went smoothly so my fears were all for naught. Arriving back in America is whole other story....but I will tell you more about American Customs on Day 8! LOL!
On the way to Germany we took the HUGEST plane I have ever been on. There were 5 seats in the middle, and 2 aisles with 3 seats on each side. The speed of the plane felt like a rocket ship when we took off, and the air pressure pain in my ear was excruciating, especially when we landed. My ear pain was severe and sharp when coming down to land, I began to think something had to be seriously wrong with me. It took several hours after landing before I could even hear again. It was just awful.
From Germany we took a smaller commuter plane to Florence, Italy. This plane ride was only about 2 hours, and it was a good thing since we were both so tired and anxious to reach our destination.
We were almost to our destination when I looked out my window and saw this beautiful sight. I believe they are the Swiss Alps...correct me if I'm wrong, but Anny, the girl we stayed with, told me that's what they were. I was awestruck at the beauty. I live in Wisconsin, and I have never seen mountains like this before, and I have especially never seen mountains from above in a plane! It was so beautiful and awe-inspiring. 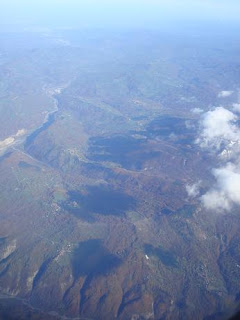 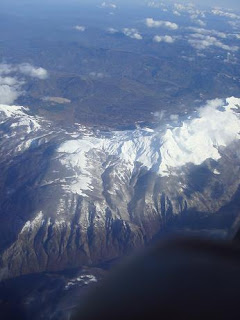 I was shocked at how easy it was to enter Florence, Italy. We didn't even have to go through customs. We just walked right off the plane, and there we were! Italy! It was a beautiful, warm sunny day, but unfortuneately my friend's luggage did not arrive so that put a damper on our arrival. But the airport officials did locate it, and we were able to pick it up the next day.
After a quick hug for our friend Anny, we were off in the car and headed for her apartment. I first had to get used to driving in a little, stick shift car. I get car sick easily, and I am also used to my large luxury car, so all the bouncing and jerking really did me in. My friend Pam and I were next shocked by all the traffic and how they drive in that country. They drive so fast, and no one, and I mean no one, obeys any traffic laws. Cars and scooters just weave in and out of traffic, no one stays in their own lane, its just unbelievable and at the same time miraculous to watch how skilled all these drivers are. I know we in America could never drive that way!
During our drive to the apartment Pam and I just kept 'oohing and aahing' over every little thing. Everything fascinated us, and we took lots of pictures from the car. Below are some pictures I took.
The architecture of Florence was just amazing to me. Every house looked like it just stepped out of a story book. 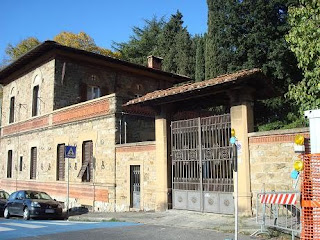 We briefly stopped the car and got out to take pictures of the City of Florence. The dome in the background is the city's main cathedral, S. Maria del Fiore. 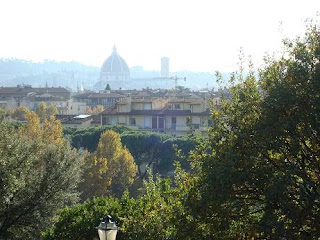 Finally we arrived at Anny's Apartment. This is the view from her window. 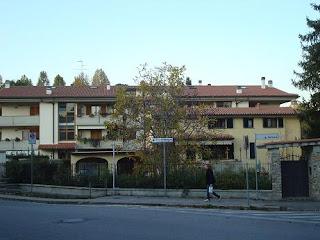 That's all for today. Tomorrow I will write about how we spent the rest of Day One in Florence, Italy! Have a great day! Amy