Before I discuss my card for today, I just wanted to mention that Darlene's Blog Candy for her Blog Anniversary is still going on, so be sure to check it out HERE. She is celebrating the one year anniversary of her blog, and has a great prize for one lucky randomly chosen winner!

Now, onto the details of my card. This card was made for a multitude of Dirty Girl Challenges on Splitcoaststampers, but I won't go into all those boring details of describing each challenge. I basically just wanted to show you how effective the use of dimensionals can be when you have a image like this Monkey image from Digital Stamp Oasis. Because the baby monkey is hiding behind the mother monkey naturally in the original image, I can really make that concept even more dramatic with dimensionals. I simply print, color, and cut out the image twice, but I 'pop up' one of the mother monkey images so it really does look like the baby monkey is behind the mother. Isn't that cool? The leaves on the palm tree are also popped up, but it isn't as dramatic as the monkey image because there is nothing behind it to look three dimensional. 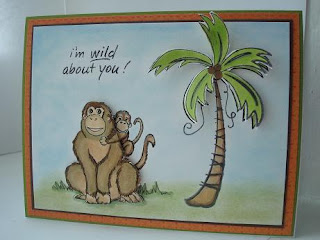 Here is a side view and close-up of the card. The palm tree is a stamped image from Mindy's Zoo, the sentiment is from Stampendous. The images were all colored with Copic Markers, but the backgrounds were colored with chalk. 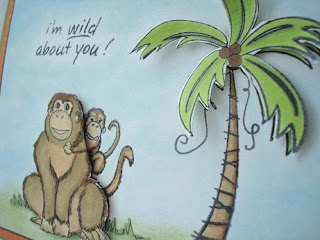 Have a great day, and be sure to check out Darlene's Blog Candy and wish her a happy anniversary! Amy
Posted by Amy Johnson at 2:39:00 PM