Hello!  I'm back with another travel post of our Spring Vacation.  We did so much on Day Five in Nashville, that I will have to break it up into four or five posts to be able to share everything.  I've already shared our morning at The Hermitage, and our time spent in Centennial Park,  now today's post will be about our walk down Broadway St., or 'The Entertainment District', as it is called on their city map.

Before I begin, you should know I don't drink, smoke, nor do I like country music.  So what the heck am I doing in Nashville?  I have no idea.  We were just constantly  driving through Nashville to get to other destinations and we thought that someday we should stop and check it out.  So we planned one day, and only one day, to spend there.

We parked our car in a parking garage and the second we entered the city street there was a lady sitting on the sidewalk asking for money, stating that she and her husband 'had a situation'.   Well, even though I'm a country girl, I grew up in a big city and I still spend a lot of time in Chicago so I know a scam artist when I see one, so we walked right by only to encounter her 'husband' or partner in crime, a few feet later.

After we ignored the second beggar, we started searching for Broadway.  The city streets themselves were very clean, and it is a very attractive and pretty city.  There is a beautiful blend of old, historical architecture mixed with modern buildings like the one below. 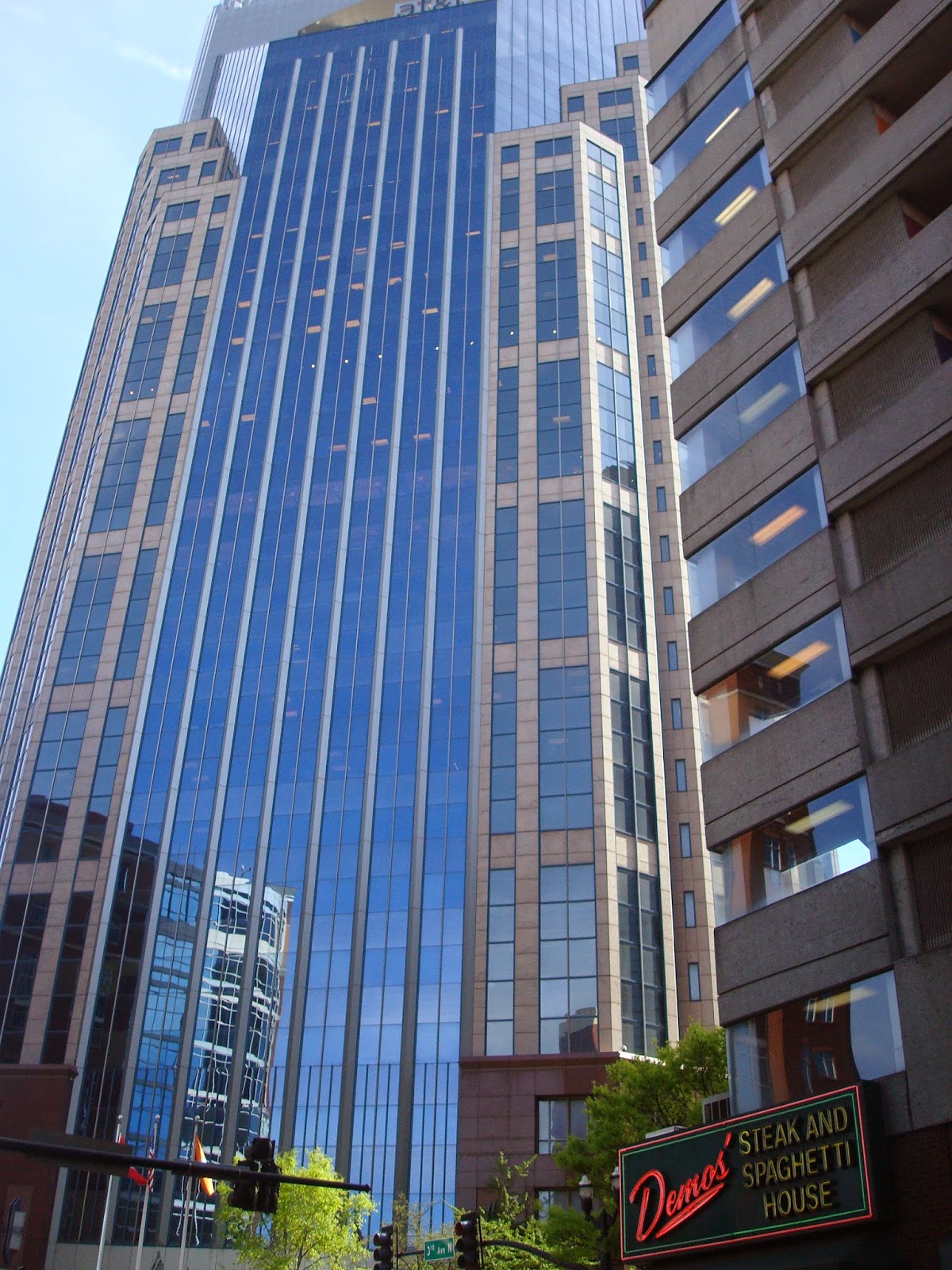 It was late afternoon when we arrived, and the streets were just beginning to fill with people ready to party for the night.  The entertainment district is basically a few streets of bars, with a few shops mixed in.  Every single bar had live music playing and my husband remarked 'They all sound good, but they all sound exactly the same.'. 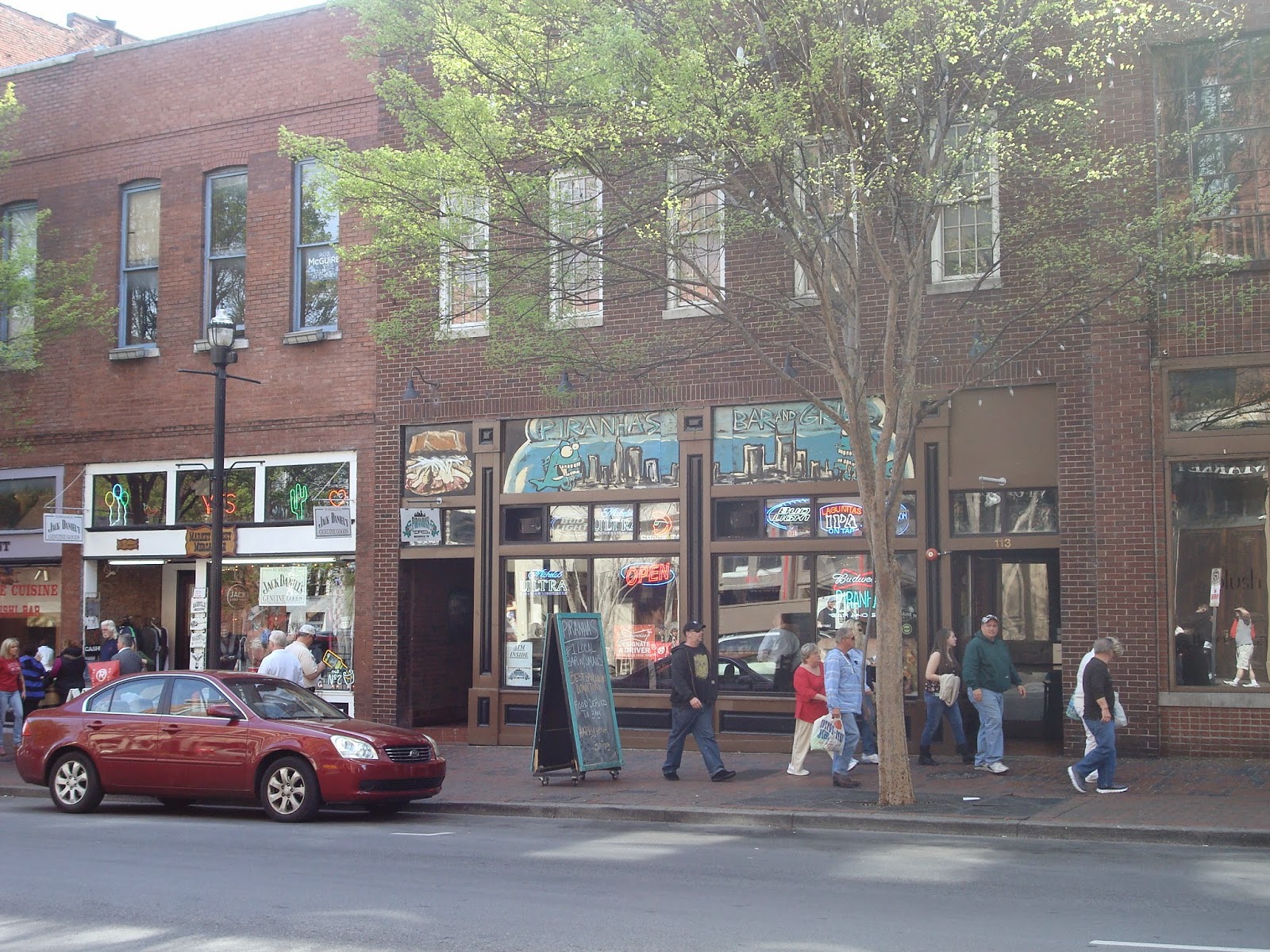 Like Beale Street in Memphis, the buildings were very old, beautiful, and had the vintage neon signs.  Everywhere we looked people were drinking and smoking, hanging out on rooftops and balcony ledges appearing to have a good old time.  Even though I had never watched the t.v. reality series 'Nashville', I remember seeing the ads describing the town as a 'drinking, smoking town', and when I was there, that was all I saw.  Everyone had a beer in one hand and a cigarette in the other.   And, unfortunately,as a repercussion of this lifestyle,  I also saw a lot of alcoholic homeless people asleep or just hanging out on the streets.  It was very sad to me. 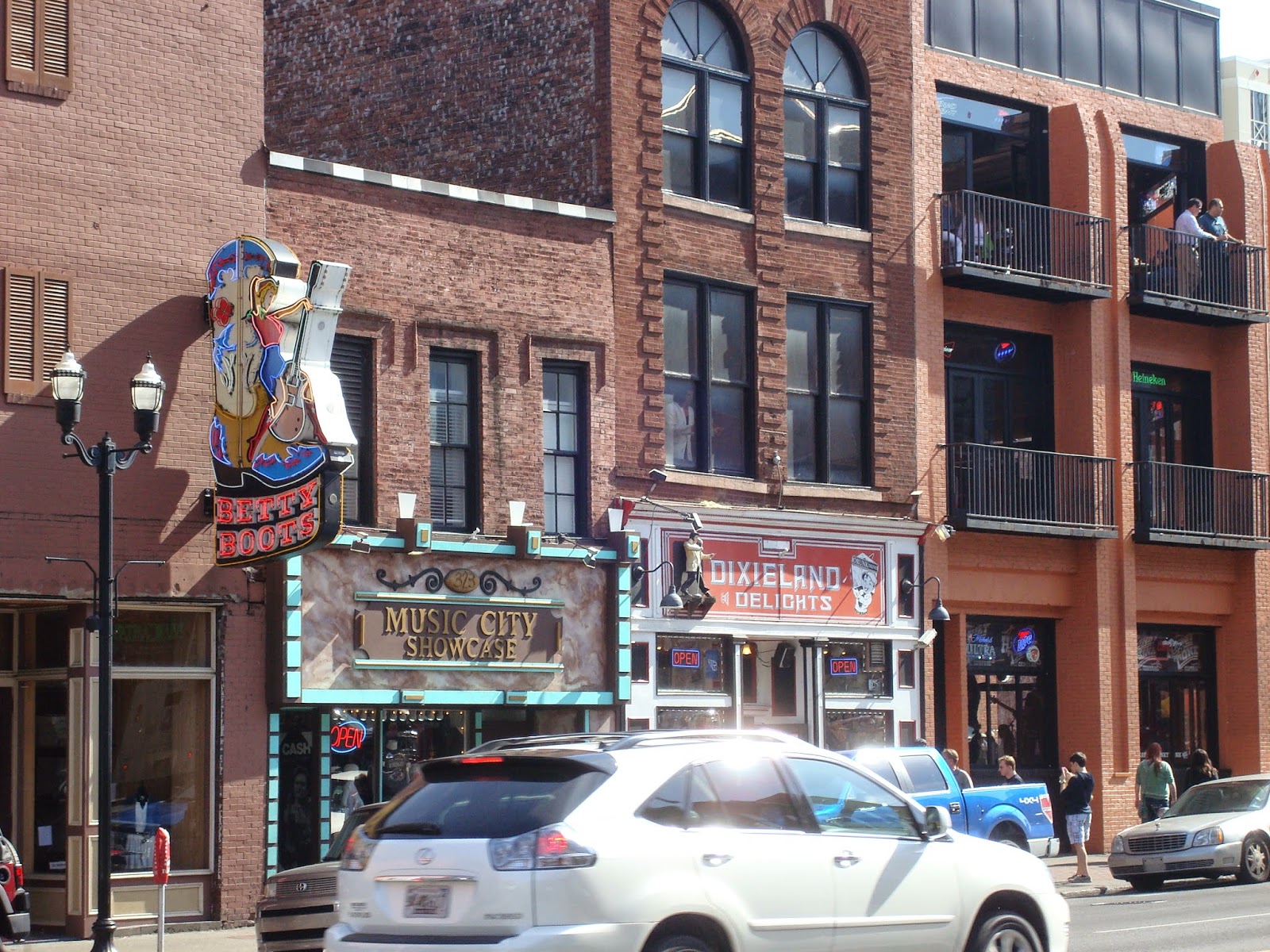 We never went inside any of the bars, we just walked down the streets and admired all the beautiful buildings and neon signs. 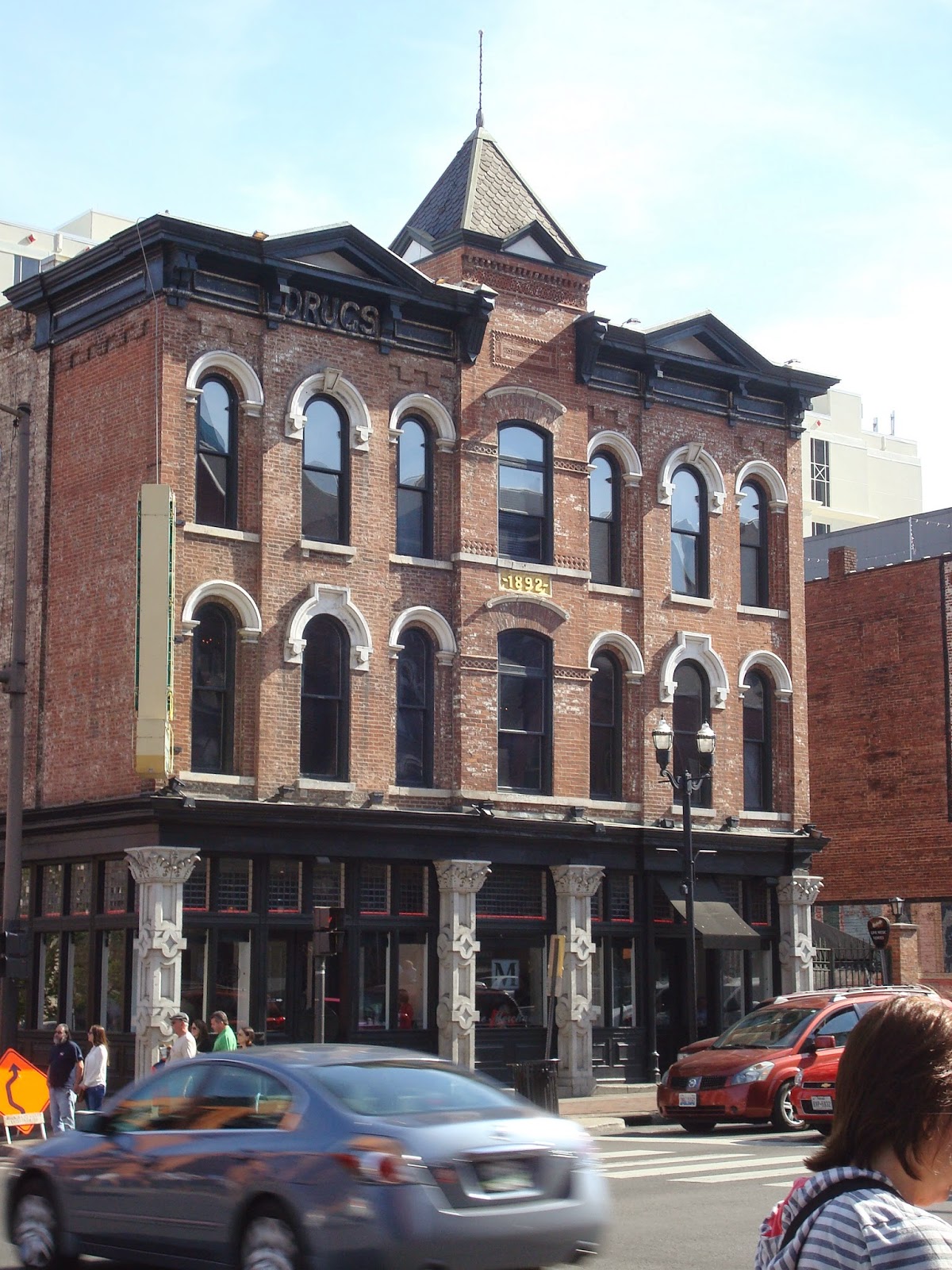 This place seemed very popular,  and seemed to be over flowing with party goers. 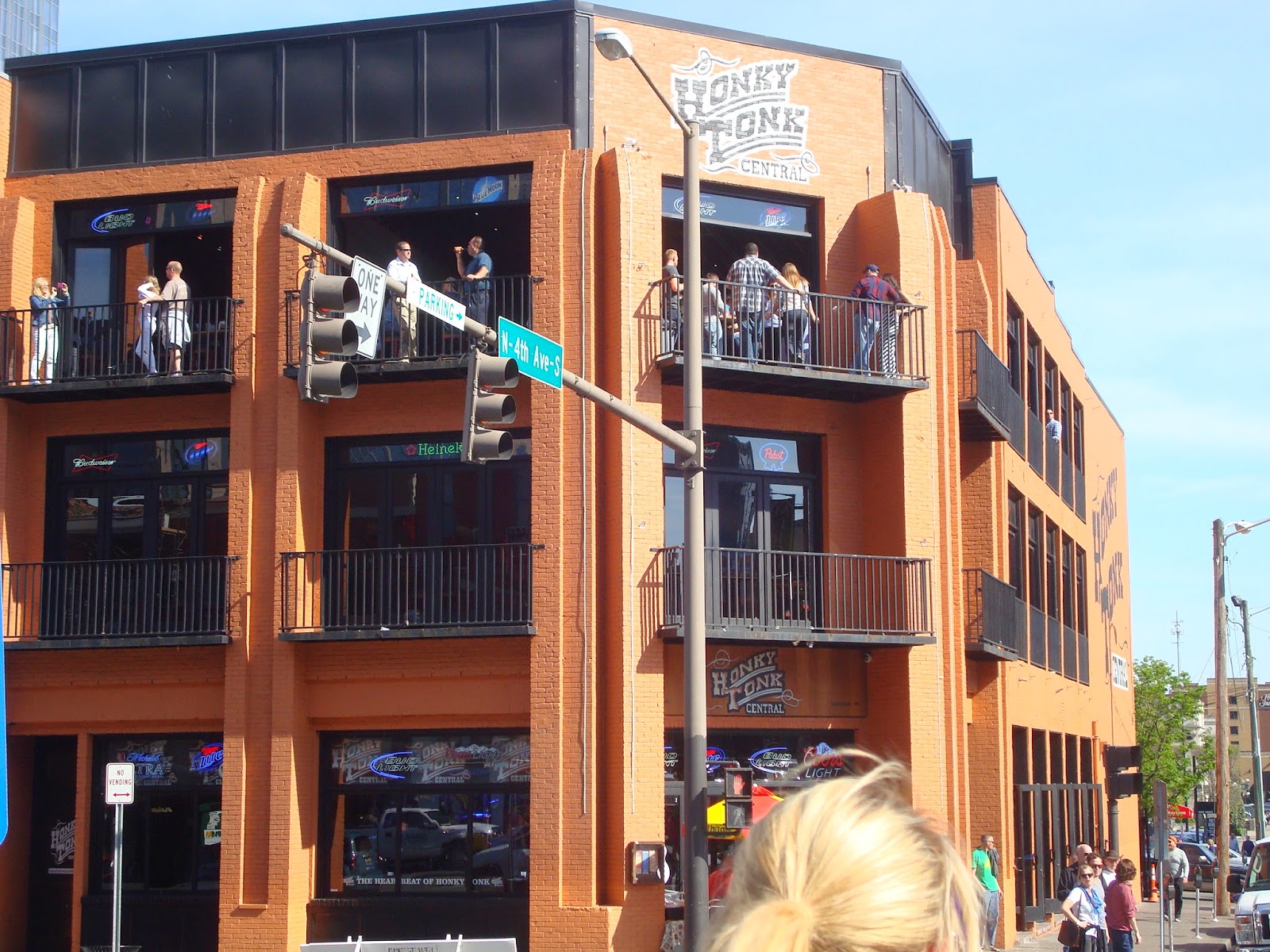 I love vintage neon signs and took pictures of all the ones that interested me the most: 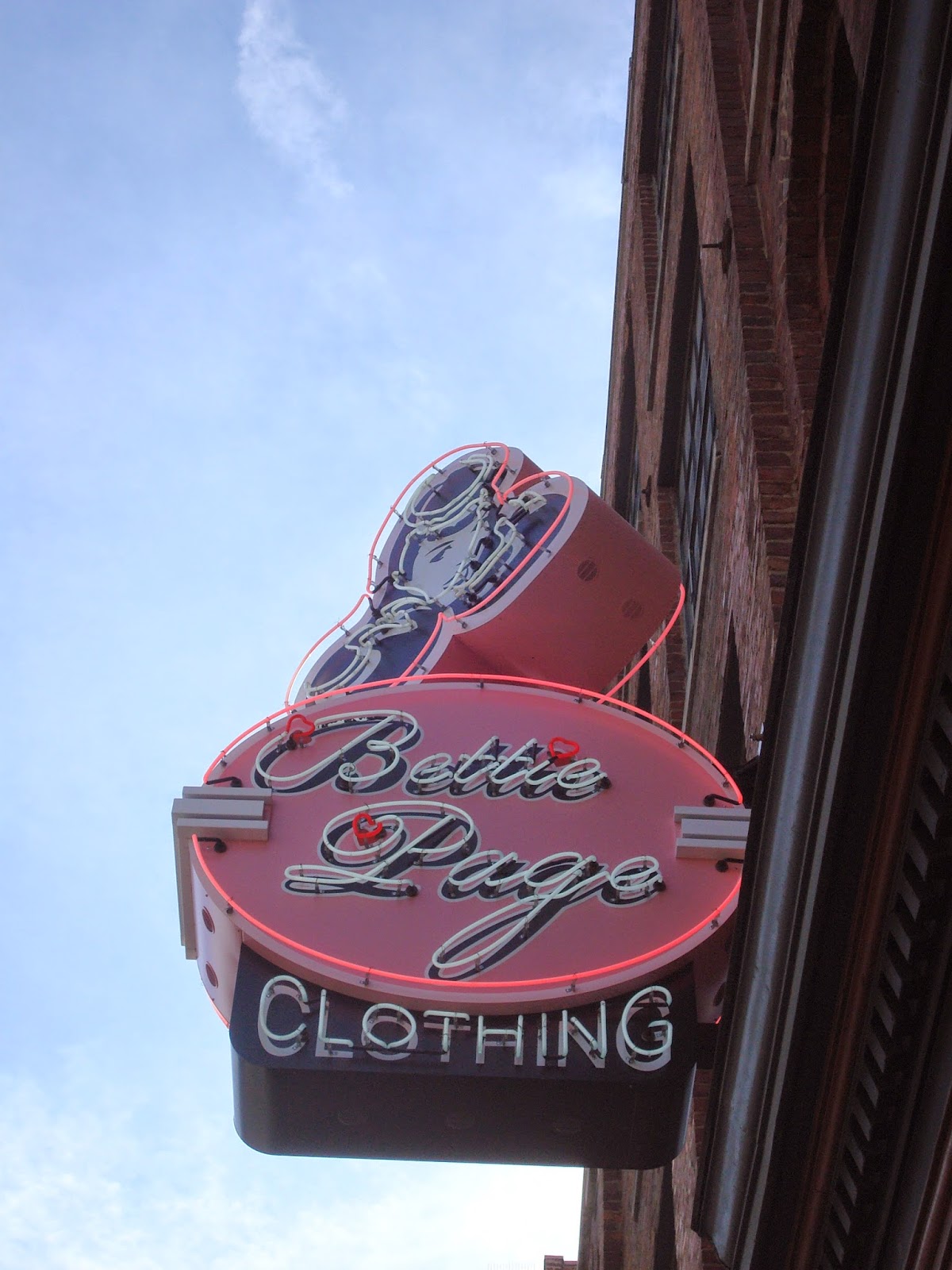 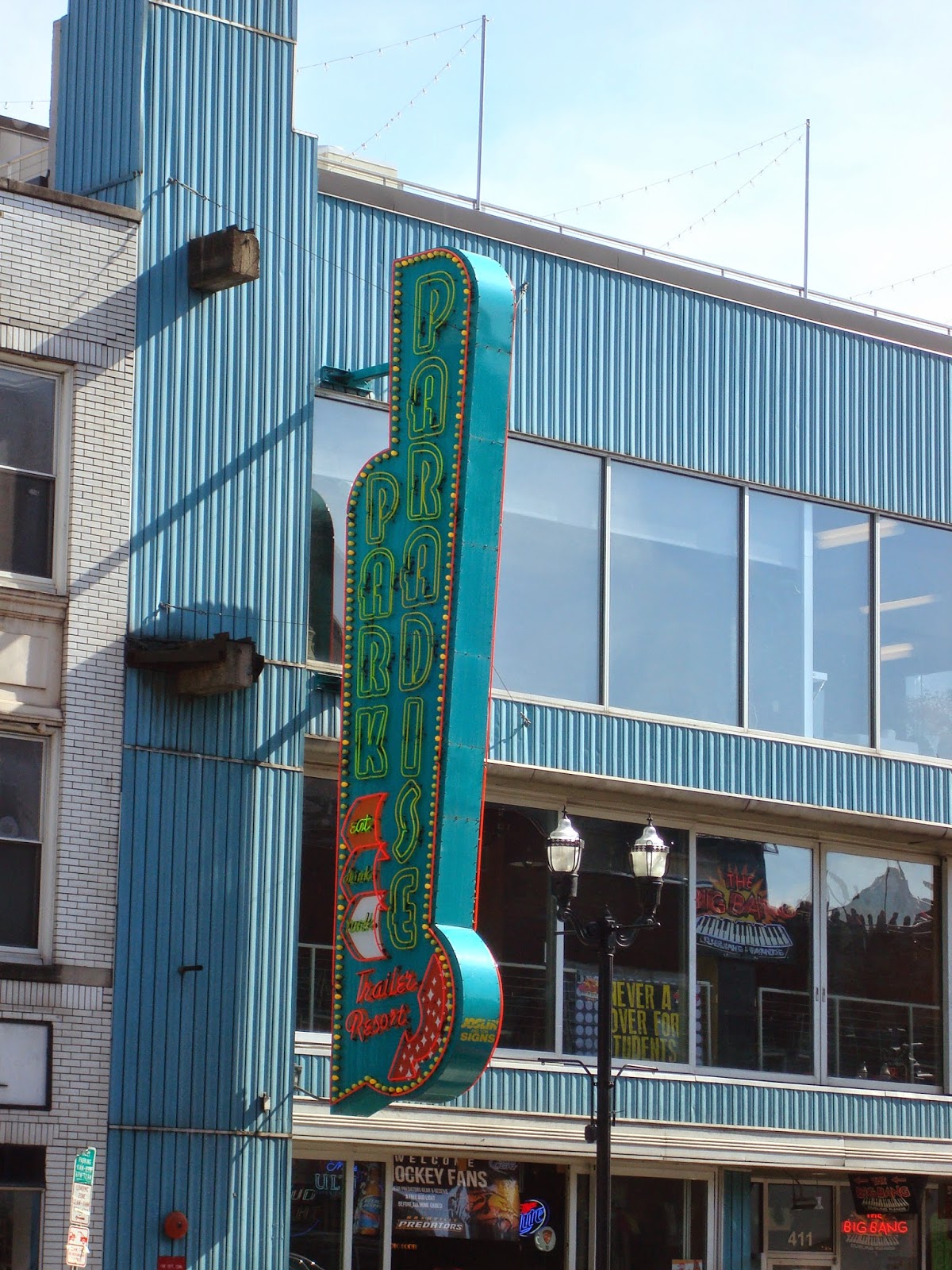 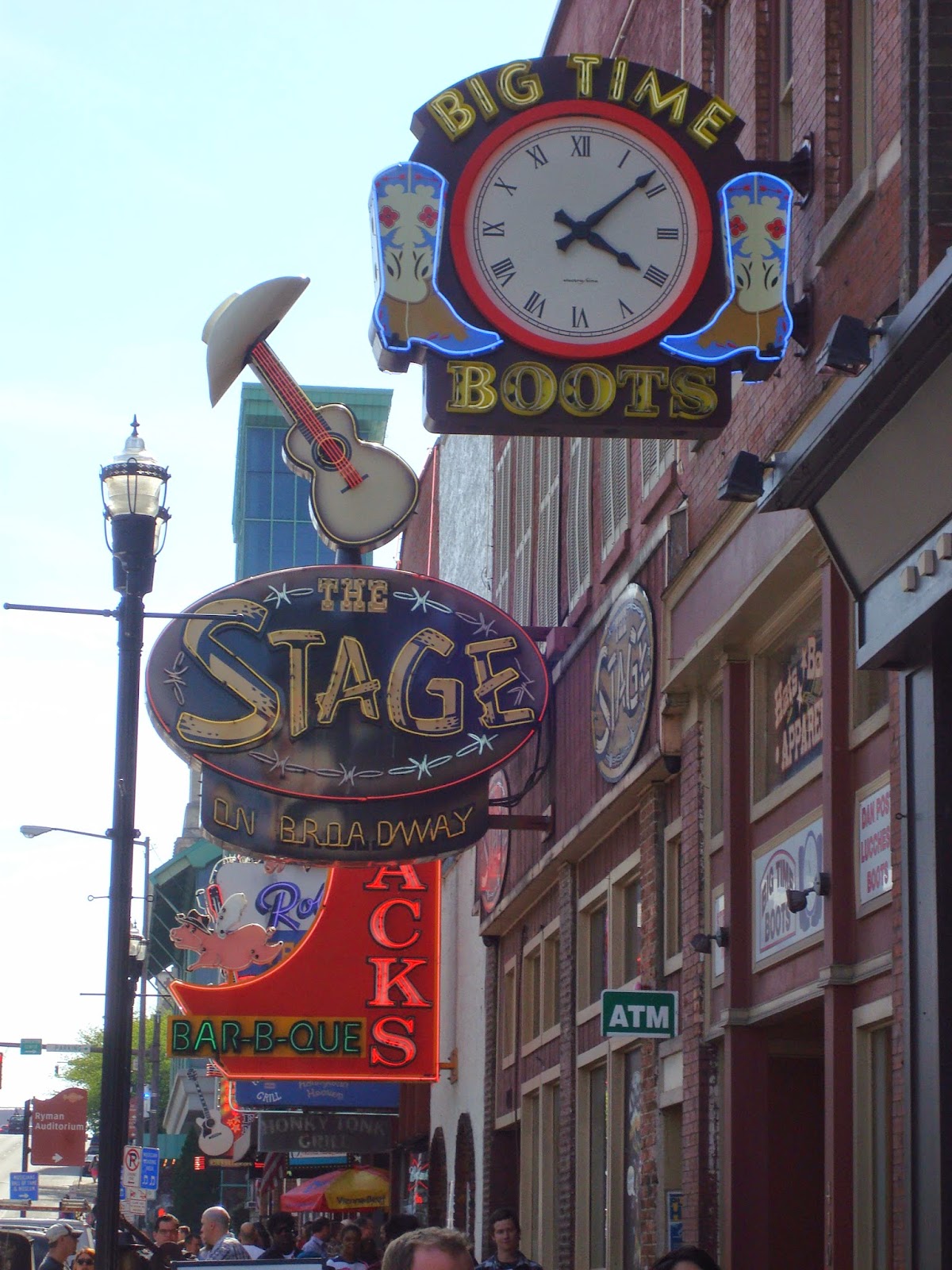 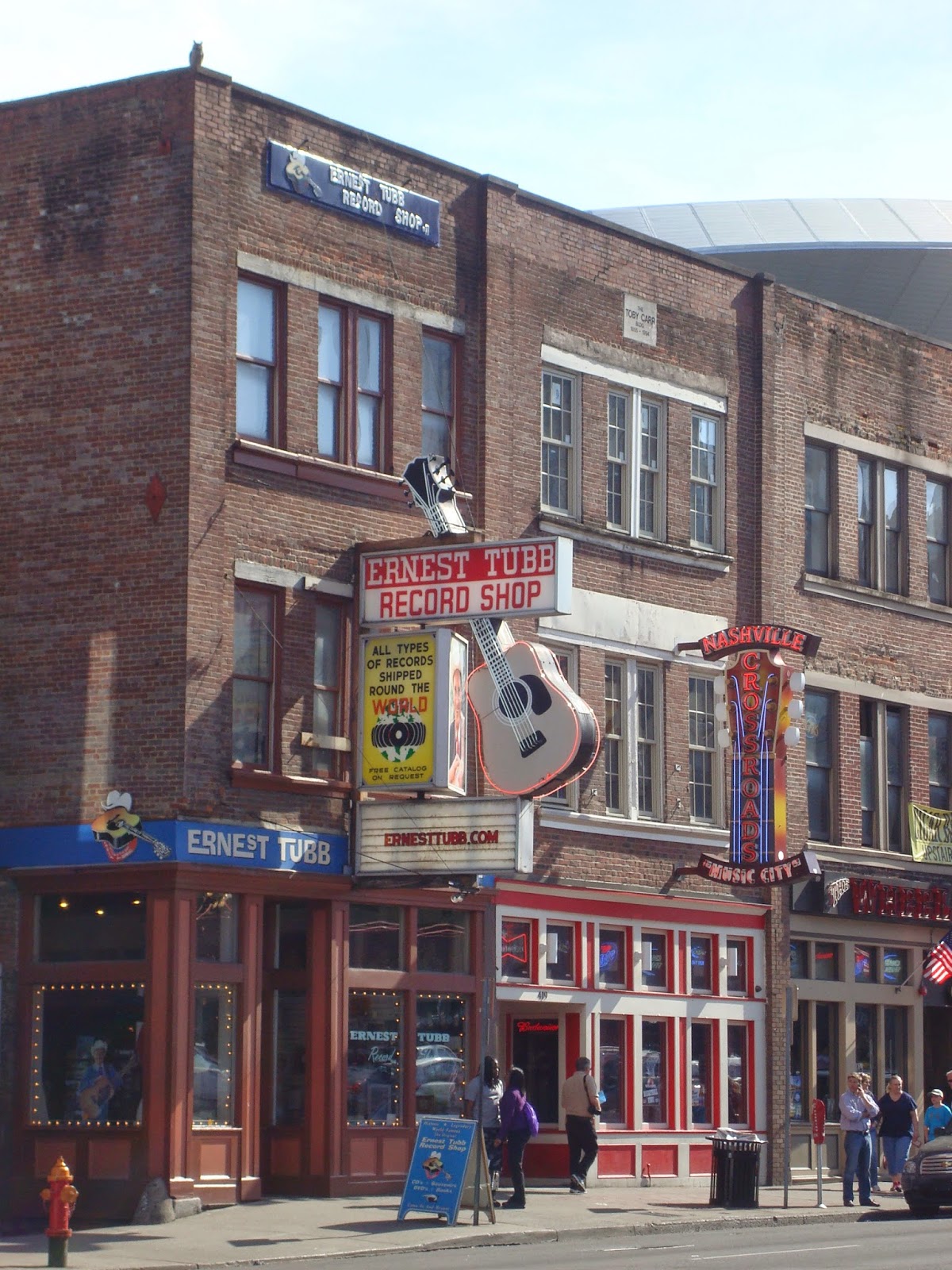 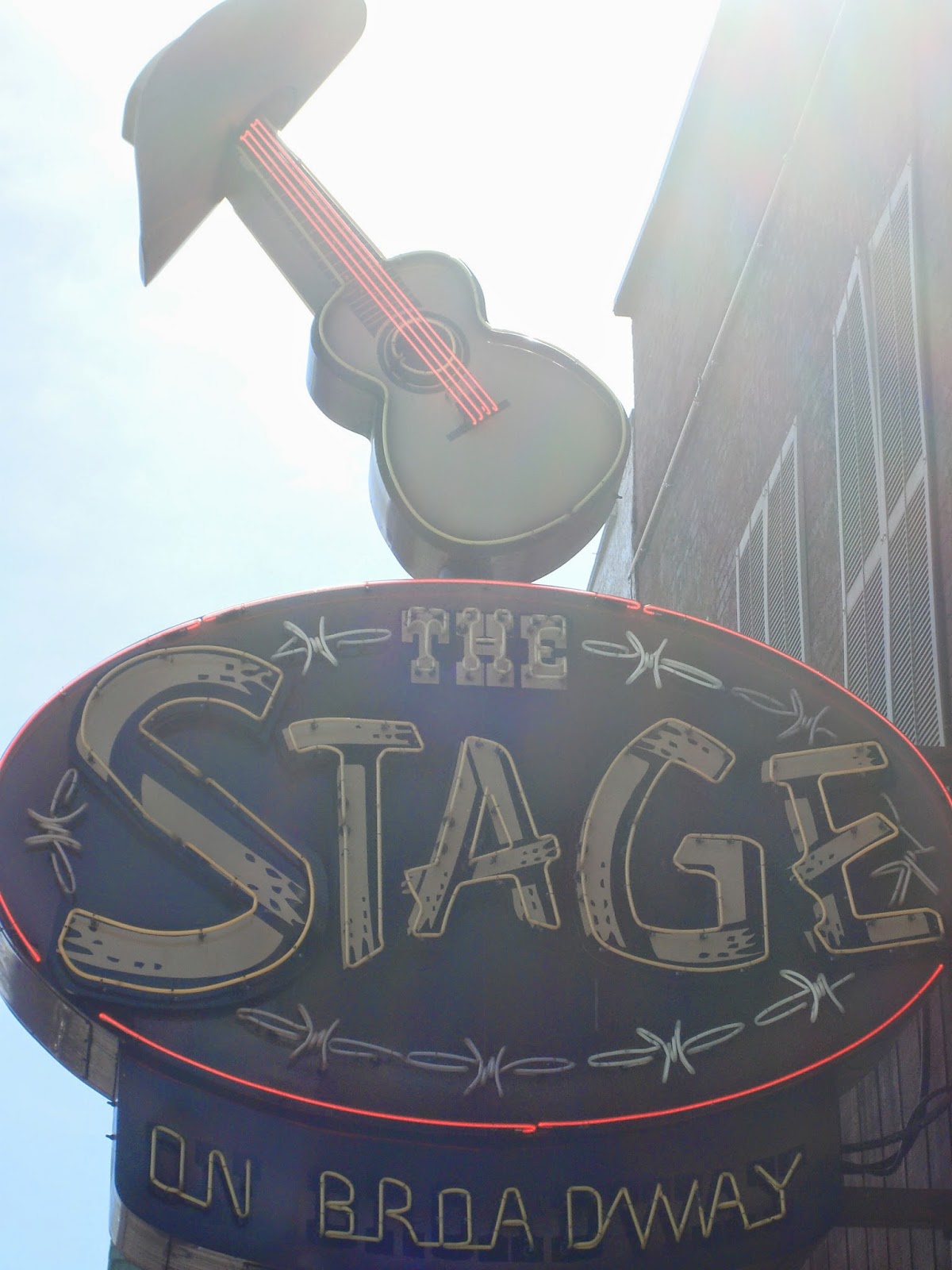 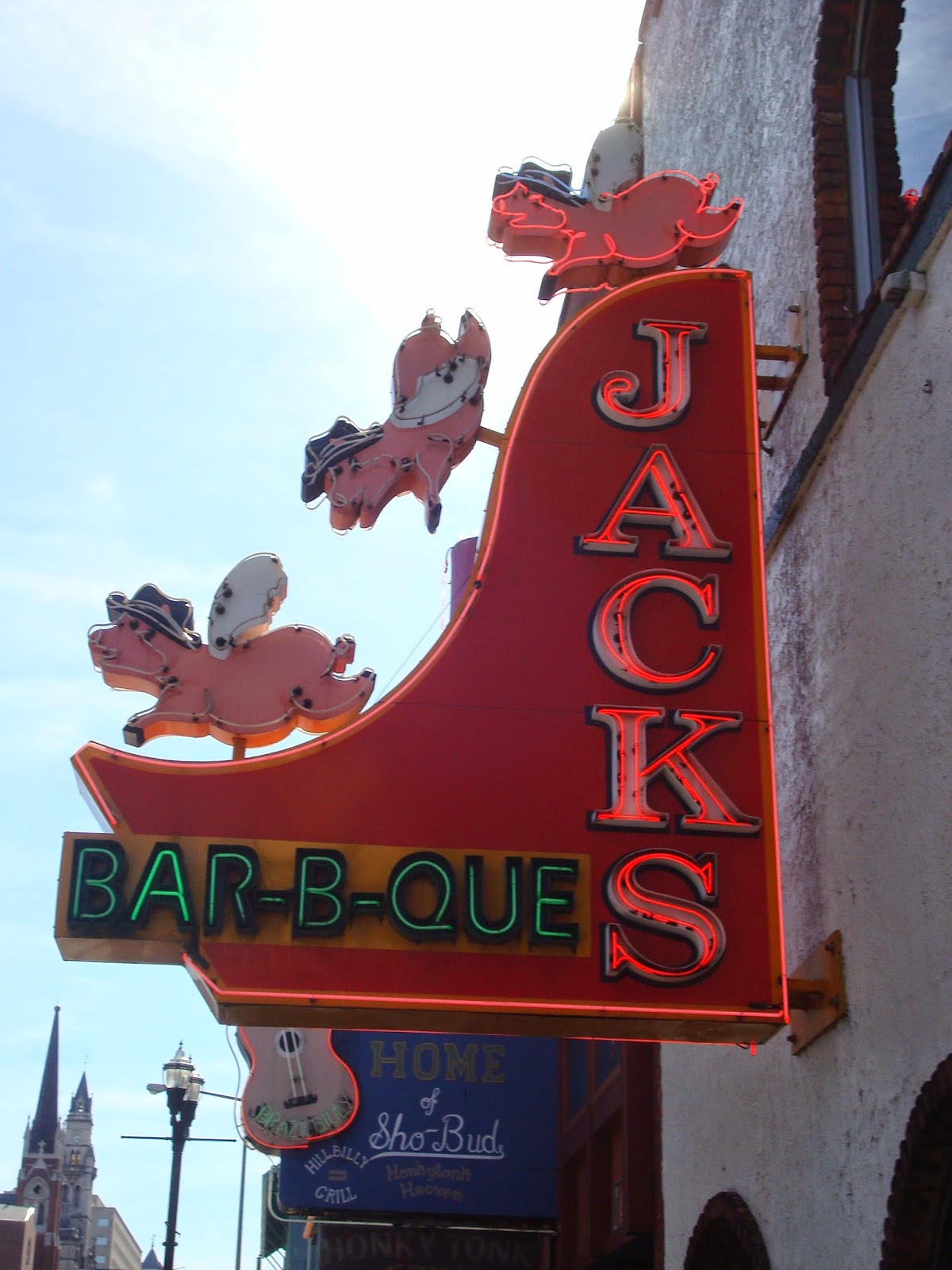 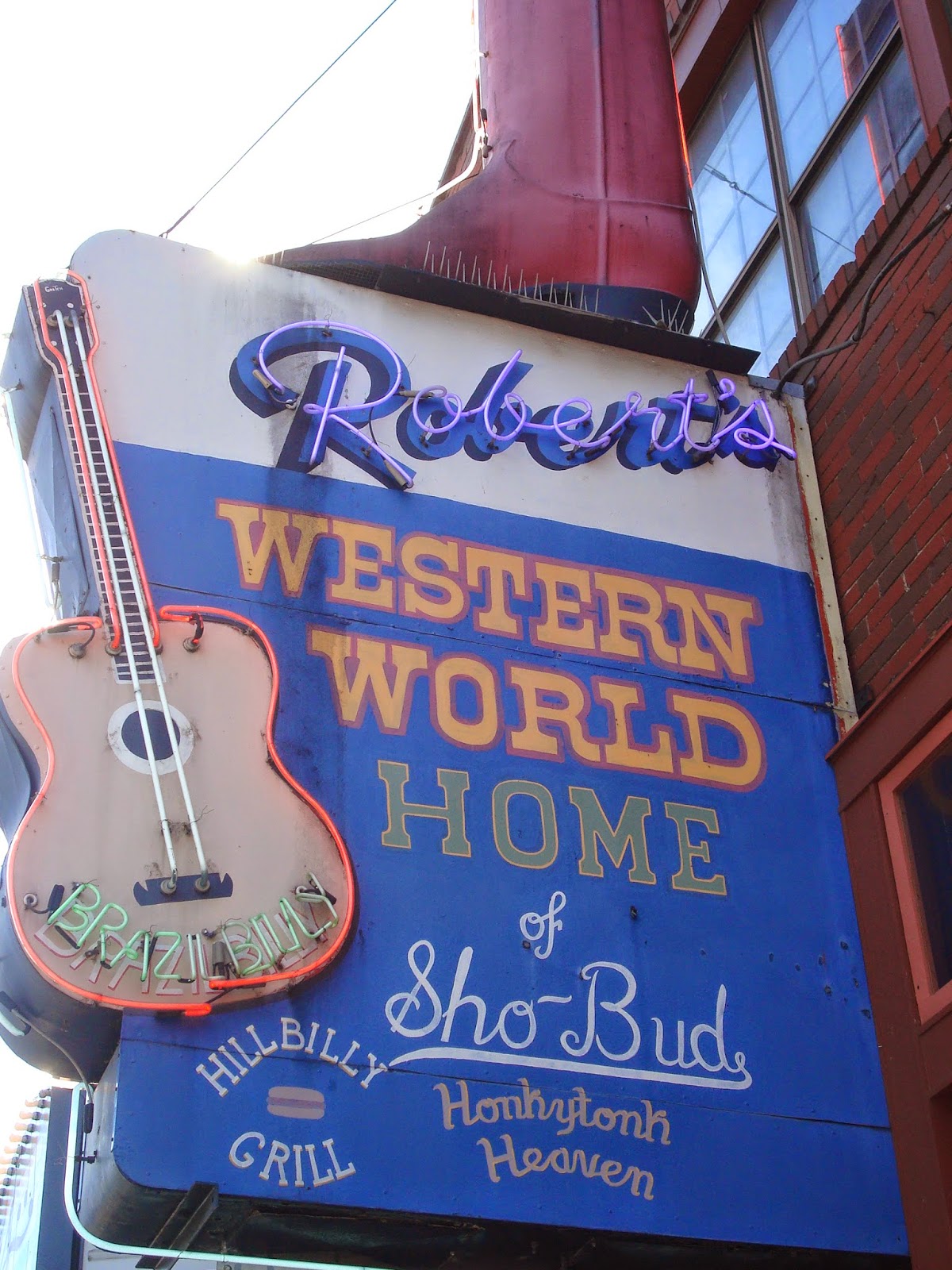 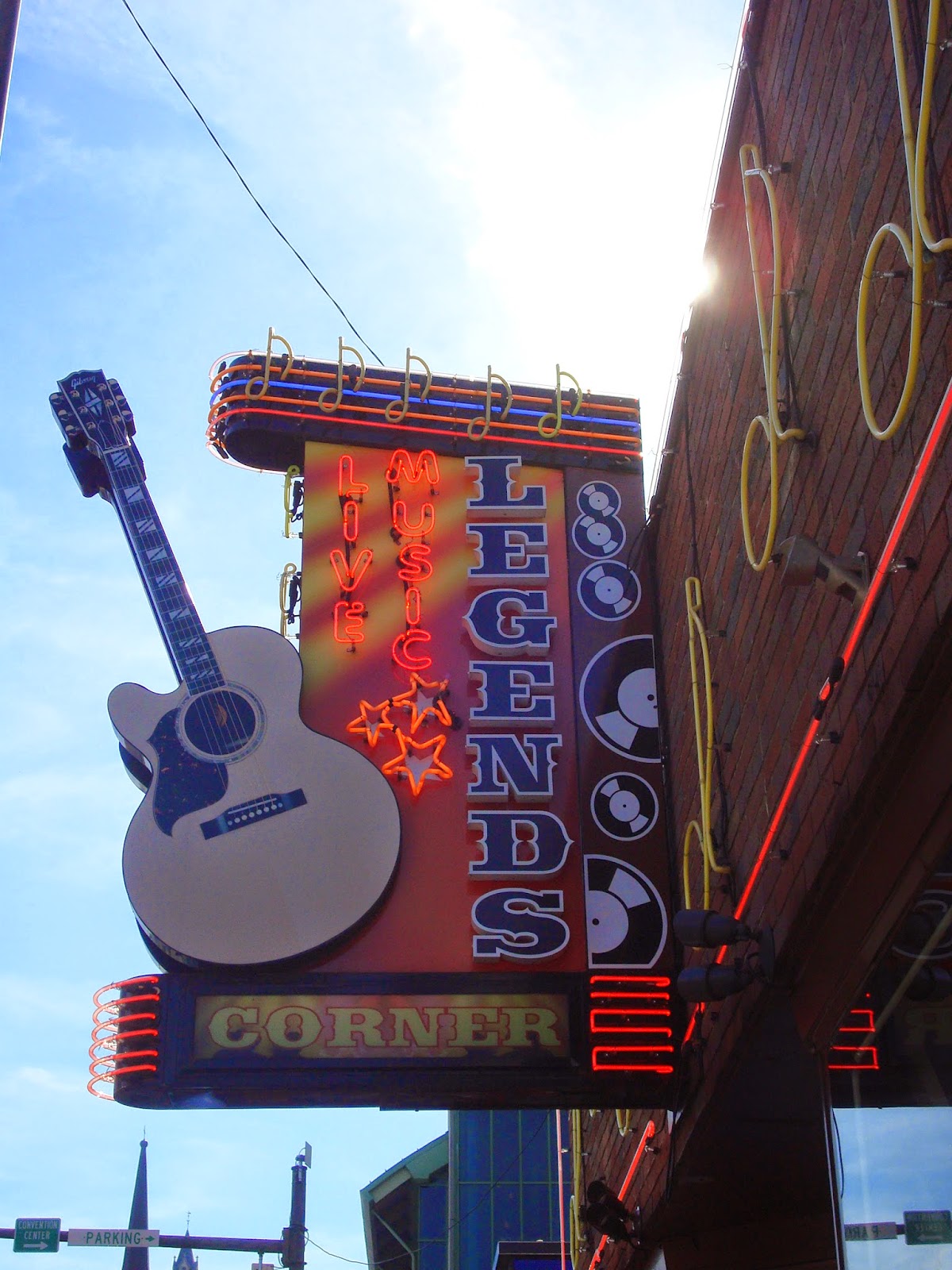 I love how the modern architecture rises up behind the shorter buildings of the historic district. 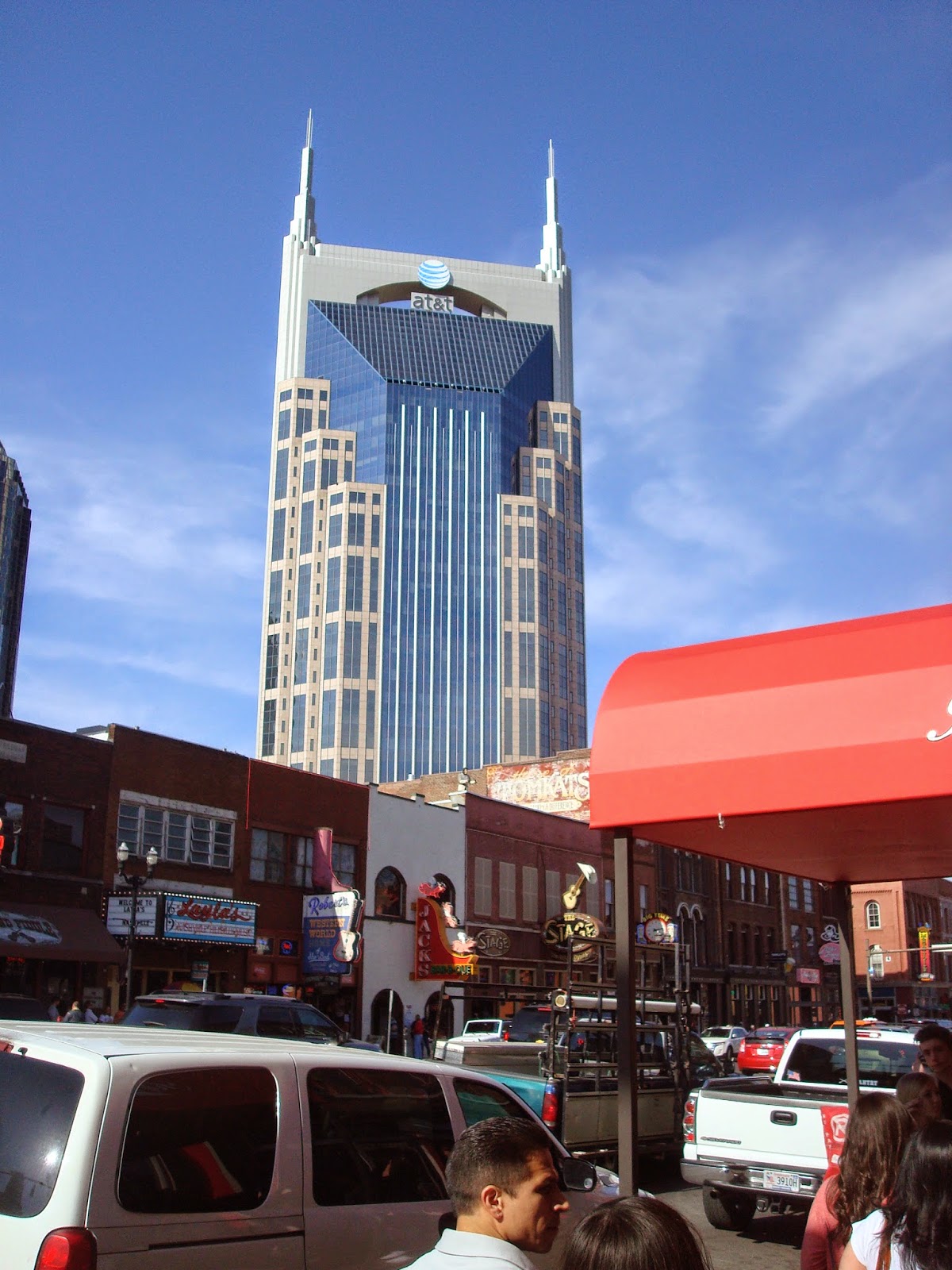 Another rooftop of people partying. 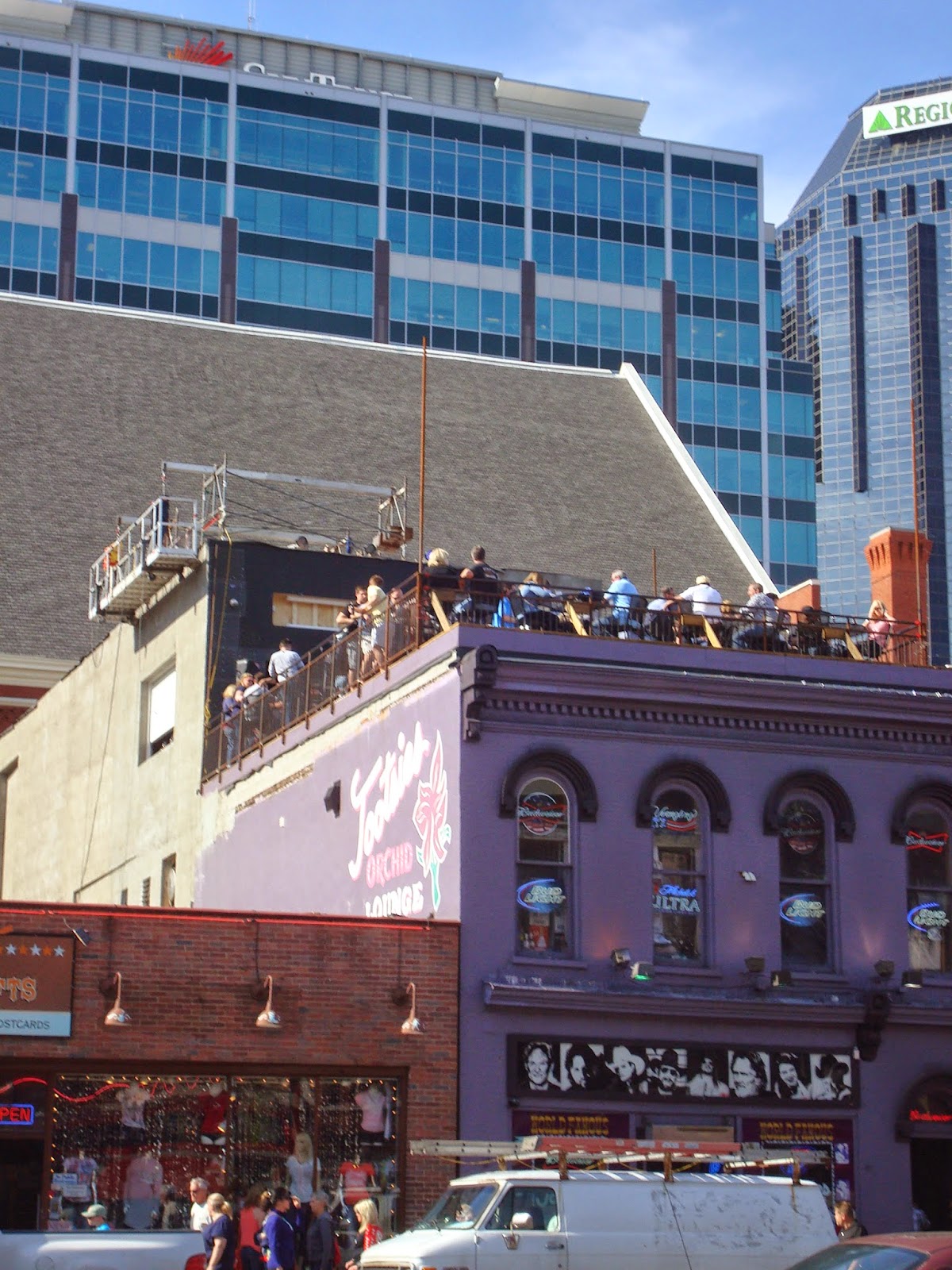 We did stop inside this store, but because we don't listen to country music, we didn't recognize any of the names so we left.  If you like country music, you probably would love this store.  It is filled with memorabilia. 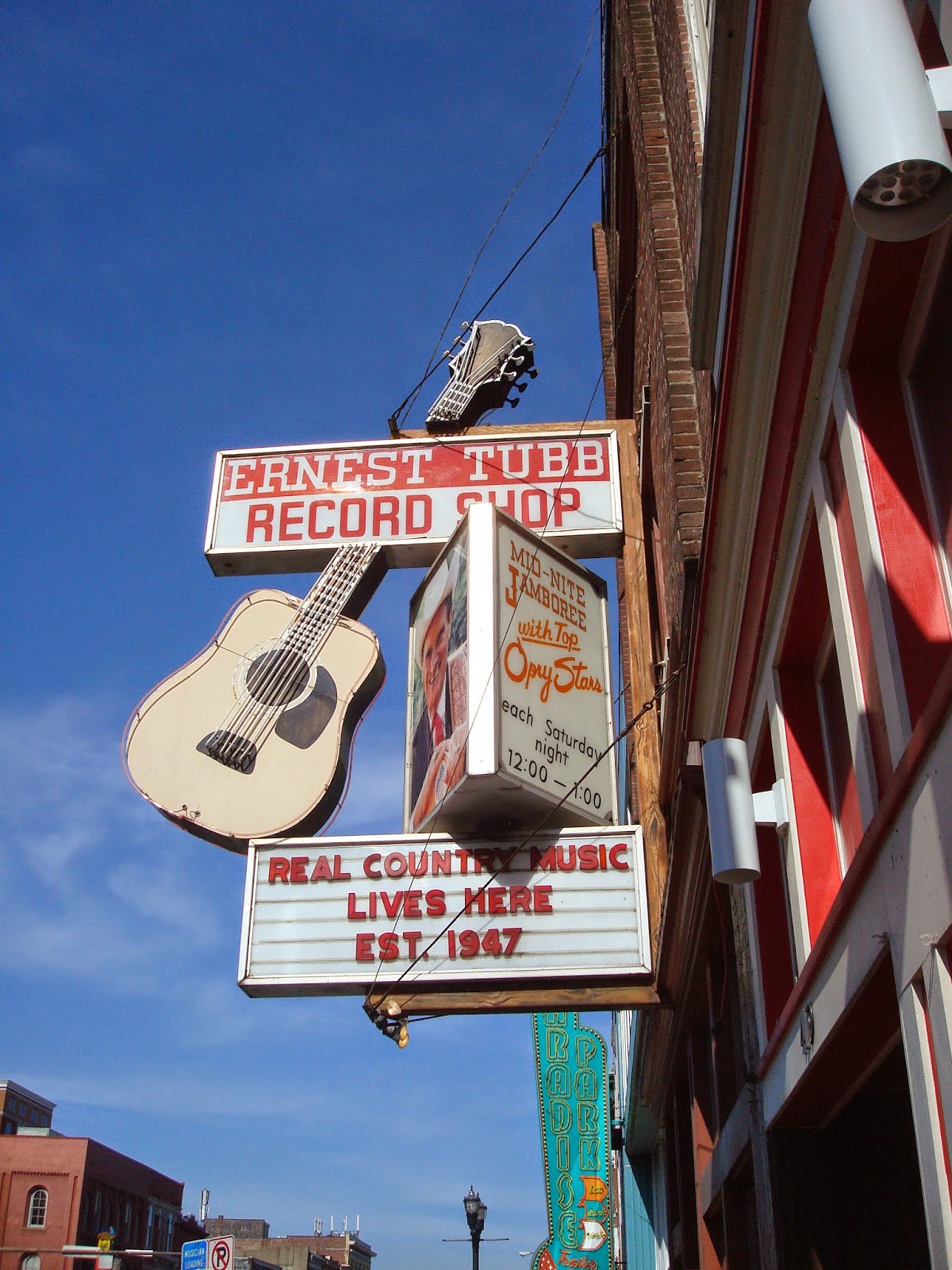 I will have more to share of Nashville in later posts that is more positive.  But my walk down Broadway was a sad one for me.  The city reminded me of a 'Country Version' of Broadway in  New York City.   Like New York, a lot of artists go to Nashville hoping to make it big only to face tough competition and a lot of disappointment.  We encountered a lot of hardened, bitter people there and we really missed the warm hospitality we experienced in Memphis just a few days earlier.  For example, there were many street musicians performing on Broadway, and while walking down the street I had my video camera recording the crowds and all the buildings, and a musician screamed at me 'Enjoy your free movie!', because he was angry that I didn't put money in his guitar case when he happened to get caught on my film for all of three seconds.   Between the angry street musician, all the alcoholic homeless people and scam artists,  and the constant inhalation of cigarette smoke, we decided to leave Broadway, and search out some cleaner air….and that will be a story for yet another post.

Looking back, I wonder if our experience of Nashville would have been different had we visited the Grand Ole Opry or something similar to that.  My husband remarked that it was quite a young crowd on Broadway.  Maybe we would have found Nashville more to our liking had we gone to some other attraction.  But like I said earlier, we only had one day to spend in Nashville and we couldn't go to everything.  I don't know if we will ever go back there to have another experience and perhaps form a different opinion.  There are so many other places in the United States we want to visit, we most likely will never have the time.  But if you ever went to Nashville and you had a different experience, I would love to hear from you!