This is a continuation of a travel series to Savannah, Georgia.  If you'd like to start at the beginning, go HERE.  The rest of the posts in consecutive order are HERE,  HERE,  HERE, and HERE.

Savannah is known for it's beautiful historic architecture:  homes, government buildings, businesses, and churches.  We saw so many beautiful historic churches during our four day stay in Savannah that I wanted to do a separate post just on these churches alone.

The most famous church in Savannah and one of the top tourist attractions is St. John The Baptist Cathedral.  If you ever get to Savannah, this is a must see!  I have seen many beautiful Catholic churches in America and Europe, but this by far was perhaps the most beautiful ones I have ever seen. 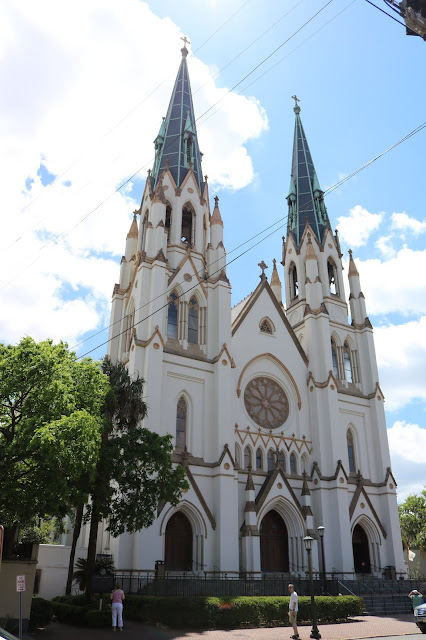 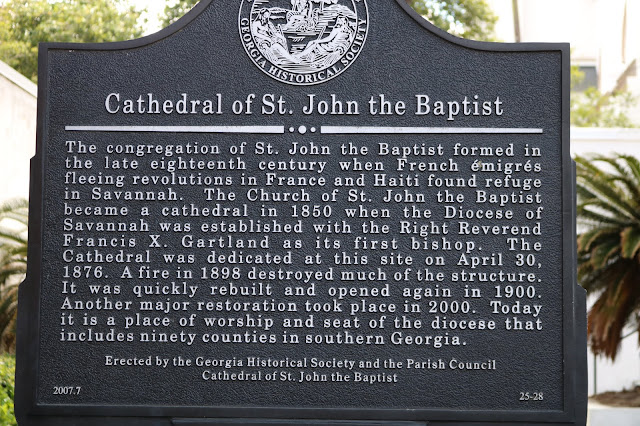 The church is still used for worship so there is no admission charge to go inside although there is a donation box. We had to wait for an afternoon mass to end before we could go inside.  They do allow photography.

I was so awestruck by the intricate beauty of this church:  the stained glass windows, the intricate moldings, marble columns, and ceiling are all jaw dropping! 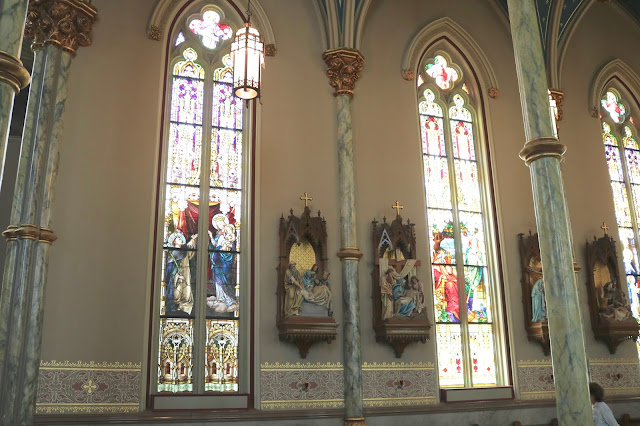 The architectural style of St. John's The Baptist is French Gothic. 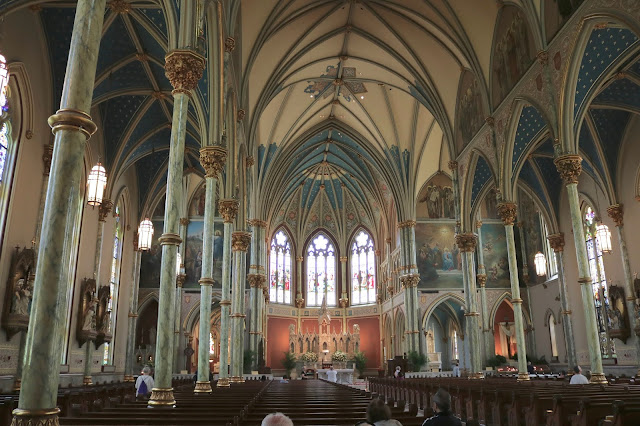 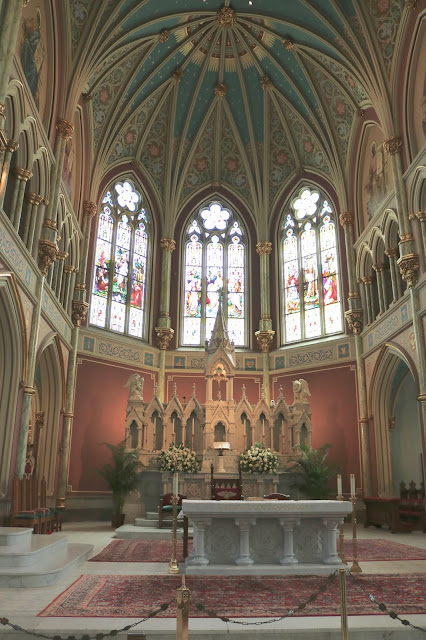 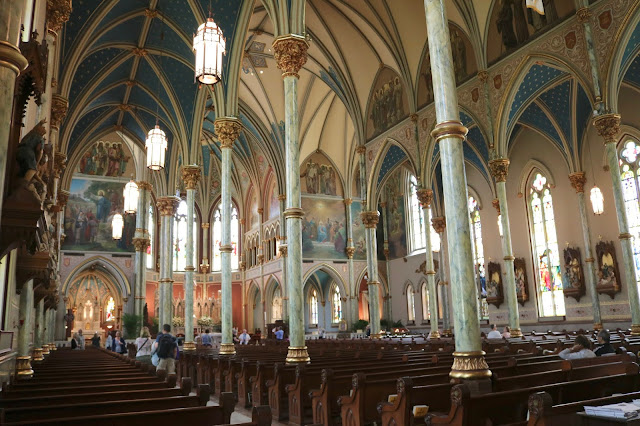 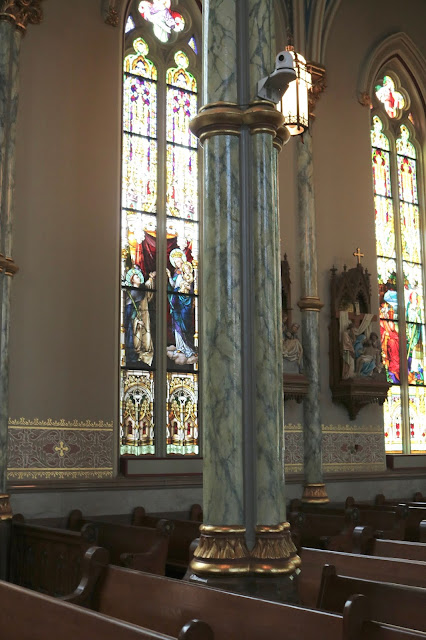 This is the exterior front door to the Cathedral.  I could not believe the size of them. 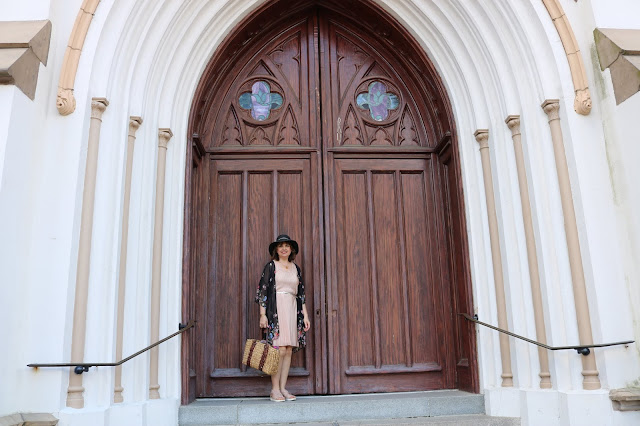 But St. John The Baptist Cathedral was not the only jaw-dropping church in town.  Every neighborhood had a beautiful church.  All are open to the public but unfortunately we weren't able to go inside any of them other than the Jewish Temple because their visiting hours are limited.  That didn't stop us from enjoying the outside of the buildings Here are some of my favorites:

This is Savannah's first Methodist church established in 1807. The offer tours every Friday at 10:00 a.m.  Unfortunately, we were not in Savannah on a Friday, so we missed the tour. 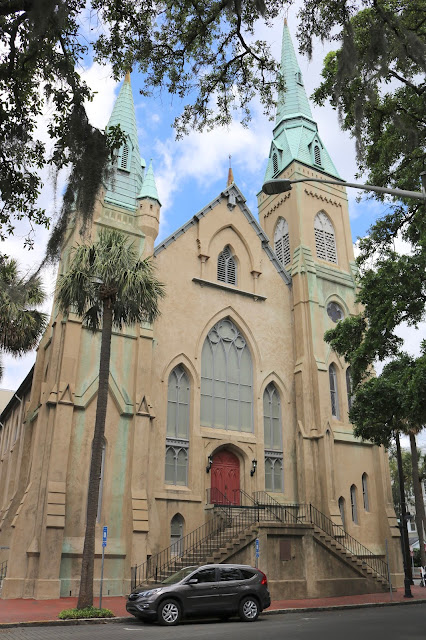 Established in 1869, I loved this little white church.  It was located in a quiet neighborhood, across the street from Whitefield Square.  I love how the white brick stood out from the blue sky.  Such a beautiful, sweet building. 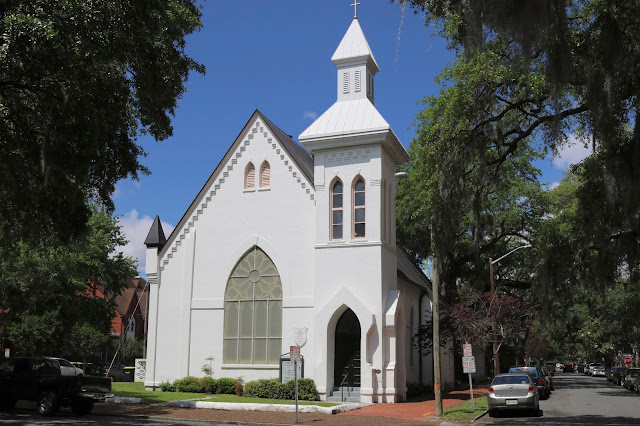 This Episcopalian church was formed in 1841.  The Gothic Revival style building was consecrated in 1853.  An interesting fact about this church is that it has a ship's mast located inside it's only spire.

The church is known for it's beautiful sounding chimes and stained glass windows depicting scenes from the New Testament. 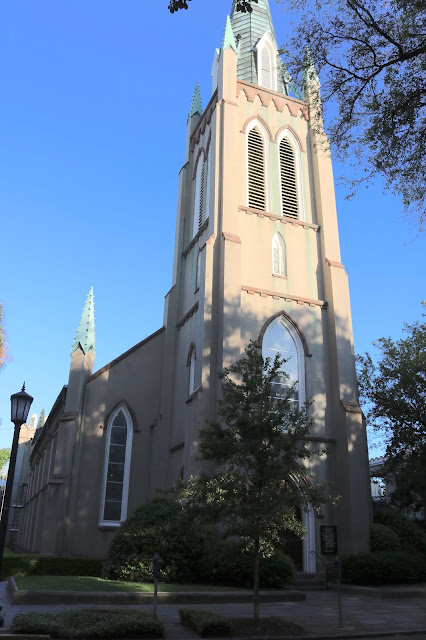 The church is located next to the historic Green Meldrim House. 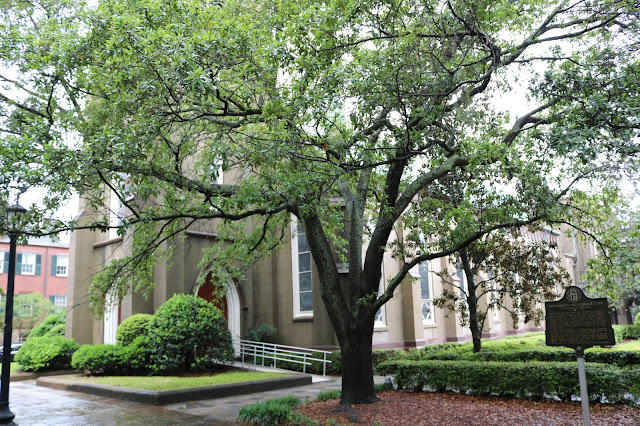 The First Baptist Church is Savannah's oldest standing house of worship.  The congregation was established in 1800 and the first cornerstone of the church was laid in 1831 and the building was completed in 1833.  The architectural style is Greek Revival.  It is located across from one of Savannah's more famous squares:  Chippewa Square.  It was in Chippewa Square where Forrest Gump sat on the "bench". 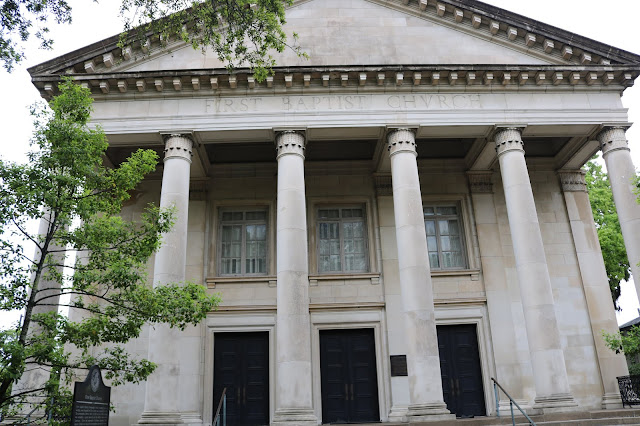 If you'd like to tour this church, you can call the church office and someone will schedule a tour for you. 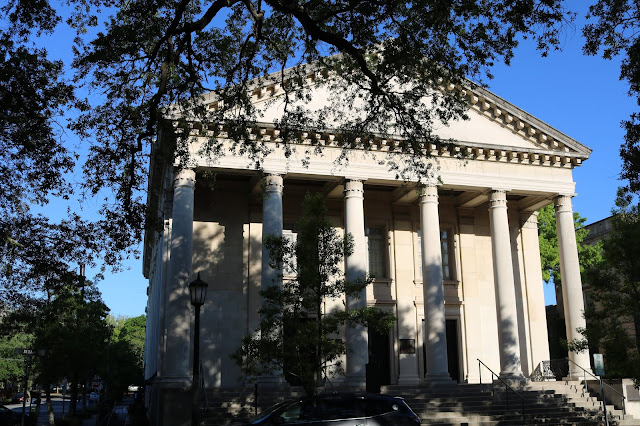 My husband thought I was nuts because I wanted a picture of this church as it was so insignificant to him in comparison to the other monumental architectural marvels of some of the other Savannah churches.  But there was something about this neo-Gothic style church that drew me in.  Even though it's roof was crumbling in disarray I found it so charming.  I loved it's small size and the red brick.

Formed in 1889, Beth Eden traces it's lines to the First African  Baptist Church, the oldest black church in Savannah. 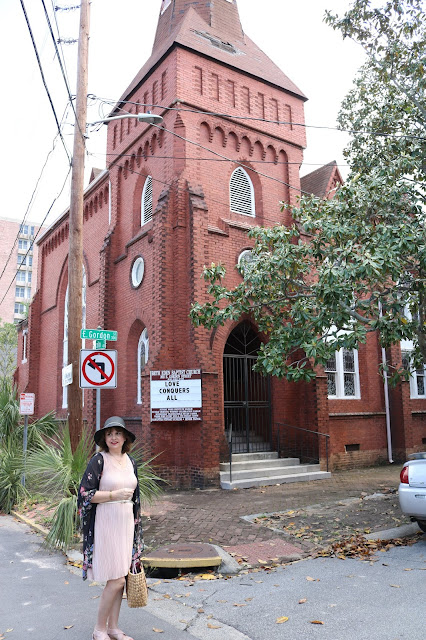 Lutheran Church of the Ascension

This church combines both Norman and Gothic Styles and was completed in 1879.  The sanctuary has a stunning Ascension window and stained glass windows that shows scenes of the life of Jesus.  There is also a marble alter that shows depicts da 'Vinci's "Last Supper".   It is open Monday - Saturday 9:00 to 2:00. 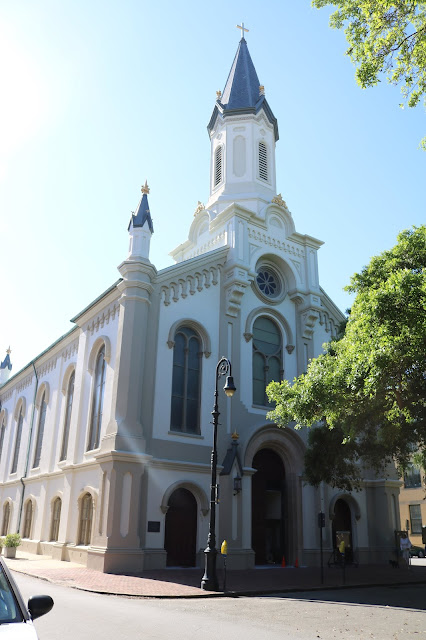 I loved the color of the facade of this church.  The moldings and octagon shaped steeples were also so interesting. 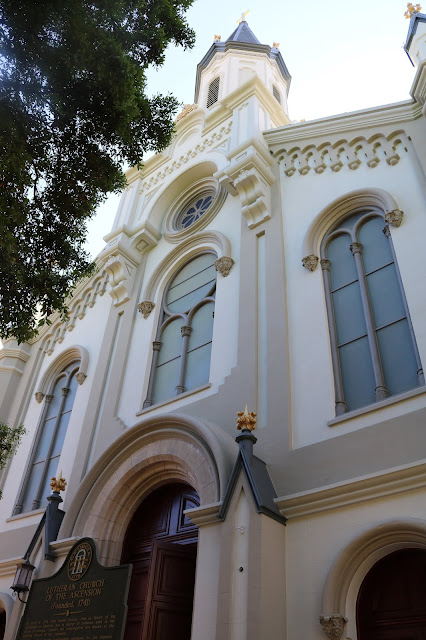 This church was formed in 1755 but the original structure was completely destroyed in a fire.  In 1891 the church was replaced by an exact duplicate. 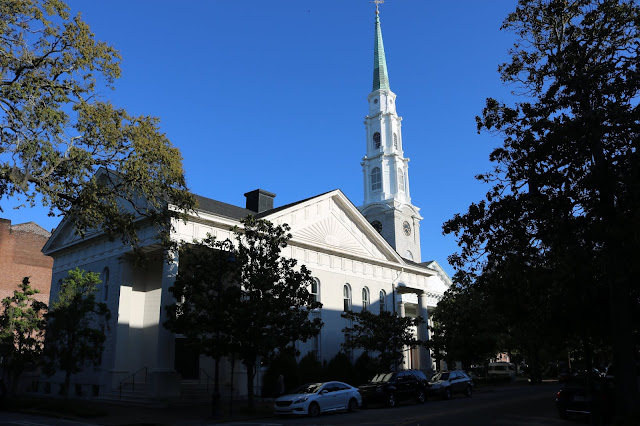 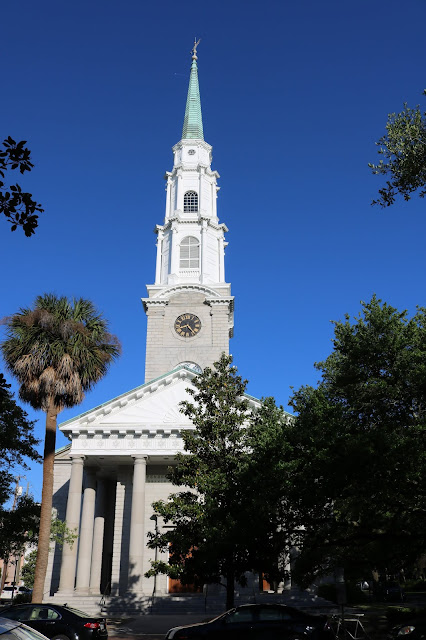 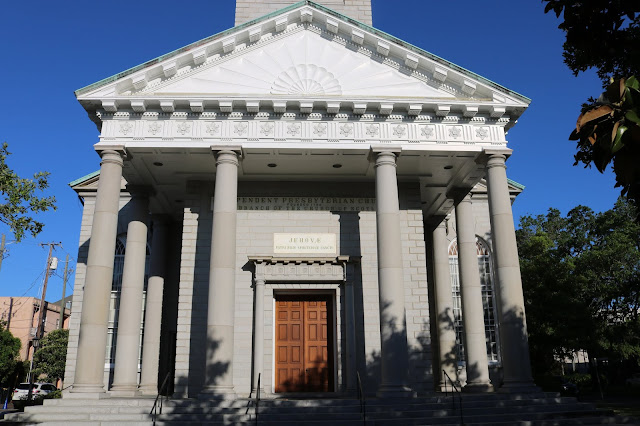 In 1838, Christ Church was set aside by General James Oglethorpe as the colony's first church.  It's architectural style is Greek Revival.  This is the fourth church built on this site. 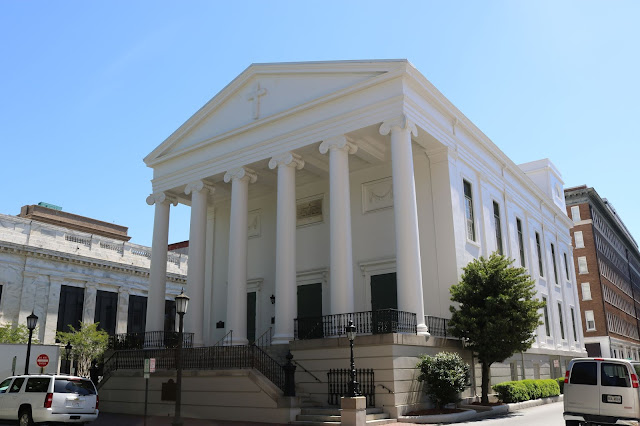 And finally, there are more than just Christian churches in historic Savannah, there is also a Jewish Temple.  My husband was so excited to visit this temple, but unfortunately they were under construction when we were there.  Although tours were still available at $5.00 a ticket, we did not think it was worth it when there was scaffolding and drop cloths in the sanctuary.  They did allow us to peek in the sanctuary doors and it was breath-taking, scaffolding and all!

The temple also houses a museum and features two of the oldest scrolls of the Torah in North America. 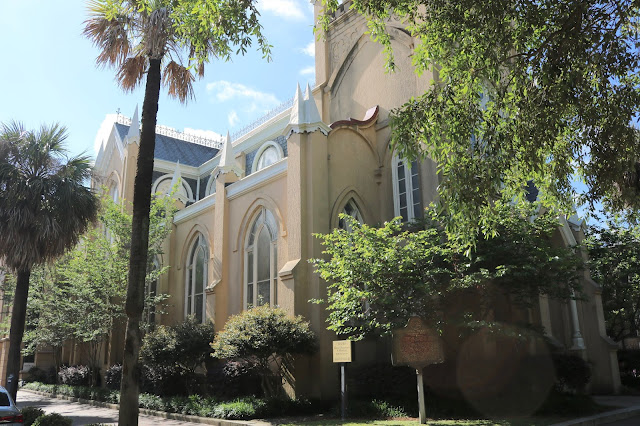 This temple is the only purely Gothic revival synagogue in the United States.  It is the third oldest Jewish congregation in the US and the oldest in the South.  It was founded in 1733 but this building was consecrated in 1841.