Well it's been so cold here in West Central Wisconsin that I was in the perfect mood to make Christmas Cards. Just kidding. I was not in the mood at all, I just participate in the Splitcoaststampers Christmas Card Challenge and I make four Christmas Cards a month so I don't have to make them at all during the busy holiday season. But it is cold here, it is so depressing. I think we've had three warm days since the season began. Oh, how I just long for warmer weather when I can wear nothing but cut off shorts, a tank top, and flip flops and be warm. I guess I better just move to Florida. Well, enough of weather complaints, onto my cards:

The first one uses an image from Papertrey Ink. The sketch is from Clean and Simple. Paper is Cosmo Cricket. I put Liquid Applique on the hat and would you believe I had to make the button from felt because I did not have one single large white button in my stash! I could not believe it! I must have a thousand buttons, I love buttons so I 'collect' them and have drawers and containers filled with them! White must be too boring for me, that's why I probably didn't have one. LOL! The three little dots below the sentiment are these cute sparkly, adhesive snow domes I found at a local scrap booking store. They are perfect for Christmas Cards. 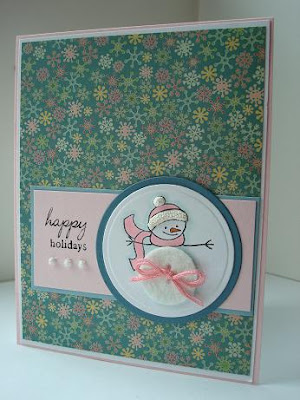 My second card using an image from Dustin Pike. The sketch is SSD71. The paper is Jolly by Golly also by Cosmo Cricket. I put Liquid Applique on Santa's hat too. He is also up on dimensionals. 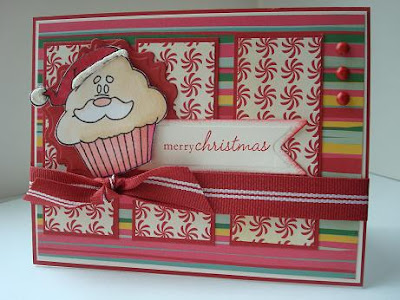 My third card uses an image and paper from Doodle Pantry. It's a pre-colored image. I didn't dare try to color an image of Baby Jesus on my own! He needed that 'glow' to look holy. It's hard for me to create a 'glow' with my markers. The layout is from Taylored Expressions 'Blast from the Past' blog hop, the snowflake is an adhesive sparkly foam piece from JoAnn's. I used more of those adhesive snow dome things by the sentiment, and the brads have a really neat soft fuzzy texture. 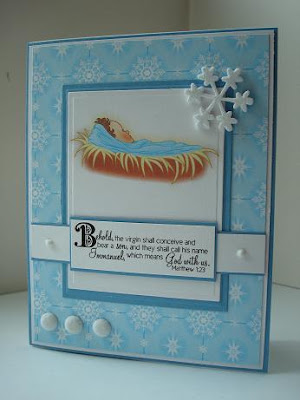 My last card uses an image called 'Warm Winter Wishes' by Crissy's Digis. The sketch is by The Sweet Shop. I put Liquid Applique (are you beginning to think I really like this stuff? I do!) on all the Penguins clothes and Flower Soft on the ground. The snowflake is from JoAnn's. 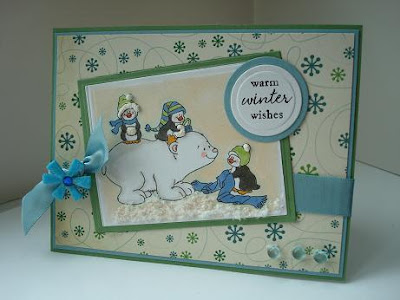 Thats it! Have a great day! Amy