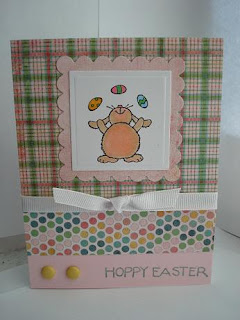 Well did anyone else in the upper mid west get hit by the big blizzard yesterday? It was predicted that we would get 6 to 10 inches of snow, but it moved through the area SO FAST, I don't think we got much at all. But when it did arrive, it was NASTY. It was the first time in my life I heard it thunder in the middle of winter during a snowstorm. And it became so dark outside, it seemed like it was evening. Visibility was almost non-existent. I looked out the windows of my house and all I could see was a swirl of white. It was amazing. Thank goodness I did not have to drive 45 minutes to work in the midst of it like I originally planned.The store I work for closed the store for the night, but they were kind enough to let me come in tonight to make up for my lost hours. Now its bitter cold again, and my husband forgot to check the propane tank and its down to 0 degrees. So, we have no heat other than our wood stove. And because our water is also heated with propane, guess what? No hot water either! UGH! Hopefully the propane truck will arrive nice and early this morning!

Well enough bad winter weather talk, lets think of 'Spring' shall we? For today's post I made two cards using paper from the same Basic Grey Paper Pad and also I used the same sketch from Paper Craft Planet. 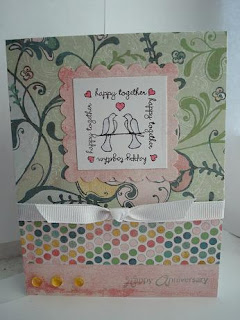 My first card is an Easter Card: Yeah! Spring! The image is by Great Impressions and is colored with Copic Markers. I used Spellbinder's Nestabilities to make the scalloped square and regular square panel. Ribbon and brads were added for embellishment. The sentiment is unknown only because I can't read the writing on the wood block of the stamp! LOL!

My second card is an Anniversary Card and it was Inspired by a Birdie Coffee Mug I saw on a Splitcoaststampers Inspiration Challenge Thread. Sorry I don't have a picture of the mug, but the challenge is already several weeks ago. I'm still playing catch-up on all the challenges I missed because I was working so much! LOL! Anyway, the image for this card is from MFT 'Hearts Galore' and the sentiment is from Inkadinkado 'Weddings/Anniversaries'. Ribbon and dew drops were added for embellishment.

Well I hope your having more spring-like weather than I am! Have a great day! Amy
Posted by Amy Johnson at 7:18:00 AM